See how retail traders are positioning in GBPUSD, USDCAD and Dollar-based majors using the DailyFX speculative positioning data on the sentiment page.

There is the Typical Market Course and Then There is GBPCAD

If you look around the financial system - from Dow to EURUSD - the predominant setting is one of uncertainty. That materializes in price action that either holds frustratingly tight ranges like the later or prompts volatility with switchbacks like the former. Trends are in short uncommon and require inordinate amount of either favorable fundamental wind or sheer speculation to sustain. Then there is a move like the GBPCAD's which has amounted to a near-unbroken two-month dive that has covered nearly 8 percent. That may not seem extreme in the world of single-share stocks, but it is exceptional for liquid exchange rates. 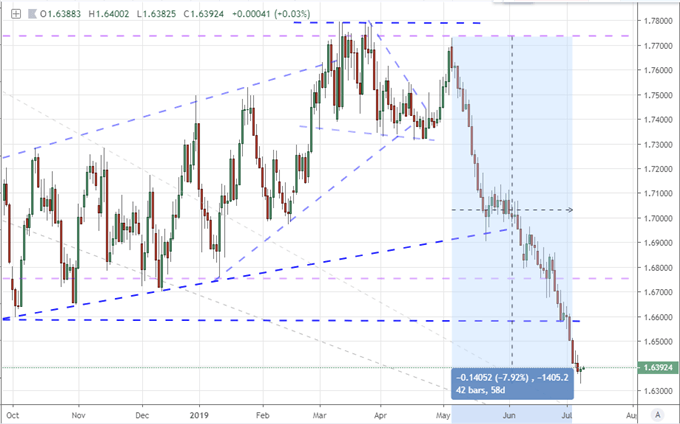 A Pound Backdrop that is Singularly Brexit

It isn't difficult to discern where the Sterling is drawing its direction. Brexit is a frequent topic in headlines and social media, a genuine reflection to the interest of the market at-large. Assessing the timeline for the negotiation between the UK's and EU's divorce, we are working with a current deadline of October 31st that is based on the start of the new European Union leadership. That said, the time pressure doesn't seem to be hastening officials to a resolution. Before the talks start again in earnest, a new leader of the conservative party needs to be chosen. That is resolution seems to be two weeks out. Only then do we get back into what seems a contentious bout of negotiations. In this environment, uncertainty is inevitable while a clear trend would seem an improbable scenario. With such a backdrop, perhaps there is weight in traditional economic data. It just so happens that there is a key run of May data on Wednesday that includes GDP, trade and industrial production among other updates. 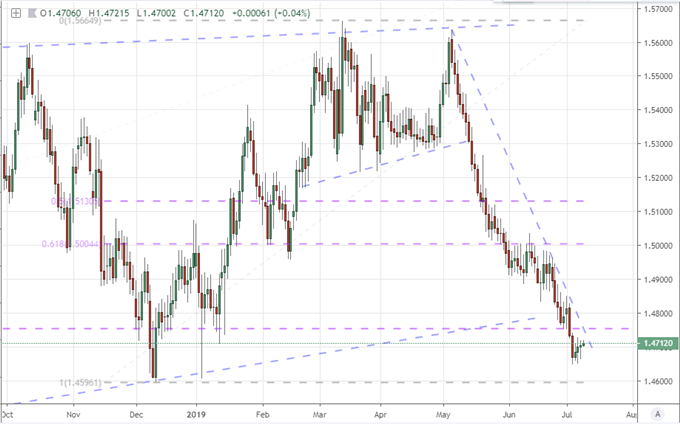 Are Rate Expectations Truly Offering the Canadian Dollar That Much Lift?

Another currency that looks to defy the non-committal status of the financial system is the Canadian Dollar. On an equally-weighted basis, the currency has advanced steadily and heartily over the past weeks. Where is this lift originating? While there have been a few favorable economic updates these past weeks, the bulk of the traction is coming through its appeal relative to counterparts. With the Fed, ECB and BOJ all pursuing aggressive easing policies (or at least in forward guidance), the Bank of Canada still comes off as steadfast. A neutral monetary policy is a bullish influence when the rest of the system is firmly standing in the dovish tide. How practical are these expectations? We are heading into a Bank of Canada rate decision on Wednesday and expectations are certainly bound to be shaken up. 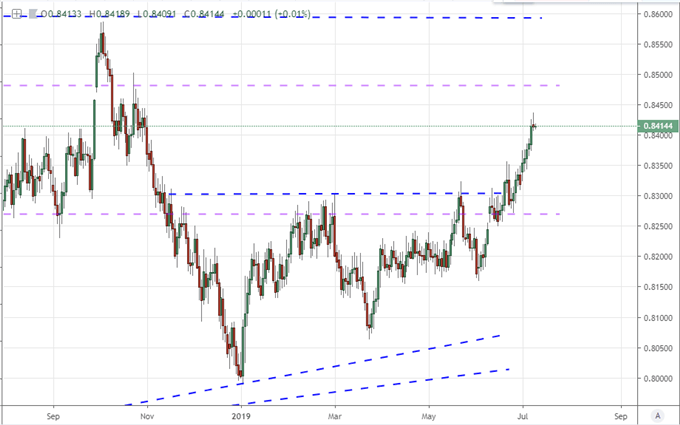 Returning to the Imbalance of Probability and Potential

When we determine what is most influential for both the Pound and Canadian Dollar, there is perhaps little surprise that GBPCAD has found a bearish bias these past weeks. However, it is the incredible intensity of the move that seems to deviate from practical expectations. Given the circumstances between prevailing trend and principle themes, the probability of an extended trend is perhaps slightly higher than a reversal in course. However, a weak showing of UK data that creates more trouble for a 'no-deal Brexit' and steadfast BOC would merely 'meet expectations'. That would not necessitate a strong market response. Alternatively, strong showing of data to offer a foothold for an economic Pound rebound and/or a Canadian monetary policy that throws in with its global counterparts would likely leverage a far more severe move owing to its sheer underpricing. Keep an eye on GBPCAD and its Wednesday sparks which we discuss in today's quick take video.