Typical or Extreme December Trading Ahead

What were the key takeaways from the G20 summit? What should we watch for next in trends for Fed and other major central banks' monetary policy intentions? What other fundamental themes are important to monitor heading into December? Join me for my weekly fundamental trading webinar Monday or my Trading Q&A Tuesday. Sign up on the DailyFX Webinar Calendar.

The Simple Seasonality Take for December

November has come to a close and we are heading into the final month of the trading year. With this particular period, there are deeply held expectations for how activity levels and risk trends will play out. Yet, while there is statistical relevance to the seasonal anticipation, it is by no means a certainty that we will slip into a comfortable, speculative stream to close out the year. Historically, the month of December reflects one of the best performing months of the calendar year for the S&P 500 (my stand in for 'risk asset') with a plunge in average volume to accompany the effort. In turn, volatility levels tend to deflate through the month and continue the trajectory through to the so-called 'summer doldrums'. While much of the year's performance has held relative close to the average monthly performance segmentation going back to 1980, there have been some notable and severe exceptions. February and October have proven extreme months in 2019, and March's carry over volatility to the year's first tumble signals what anxiety can do to the markets. There is relatively little to gain from pursuing the quiet forecast through year's end, but there is clearly an extreme risk for loss should another spark of volatility on the level of previous swoons hit. Risk and trade management are just as important as trade accuracy, so focus on the elements of the effort that we can reasonable control. 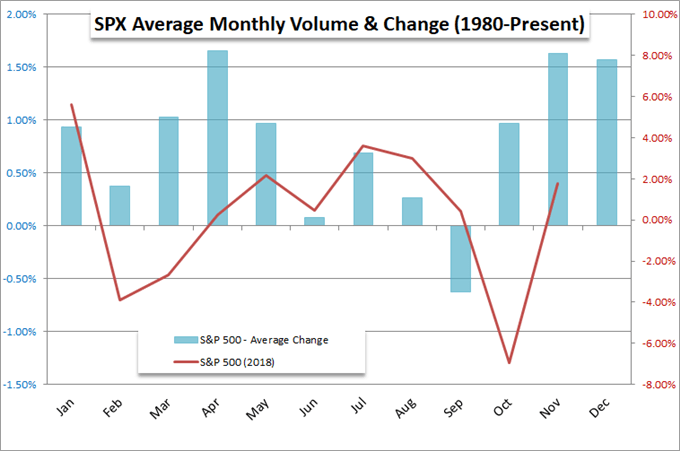 It is possible that we have another dramatic volatility event before year end - especially given the incredible list of systemic threats we are currently processing - but that depends on circumstances. It is clear that the markets are acutely sensitive to instability in the financial system and don't need much prompting to shed excessive risk and seek safety. That said, complacency continues to show a resiliency following a decade of nearly relentless climb despite questions of value. One component of this environment that is far more reasonable to project is the assumptions around liquidity. Through these final weeks, we are almost certain to see a drop-in participation and volume. This is a result of market closures, accounting and portfolio events, not to mention one of the strongest collective views of anticipation of the calendar year. A drop-in liquidity in otherwise quiet markets results in the typical December restraint we have come to expect. Yet, the same thinning can also amplify anxiety where is finds traction through surprise or thematic fundamentals. There is a natural correlation to be found between volume (S&P 500 volume) and volatility (VIX). That should make sense intuitively as an increase in activity will draw more turnover in the market in order to de-risk or take advantage of the move. However, there is also an inverse relationship to be found between volatility (VIX) and the performance of risk assets (S&P 500 price). By reasonable transitive speculative properties, it stands that any bout of volatility over the coming weeks can ravage the ill-prepared risk markets. 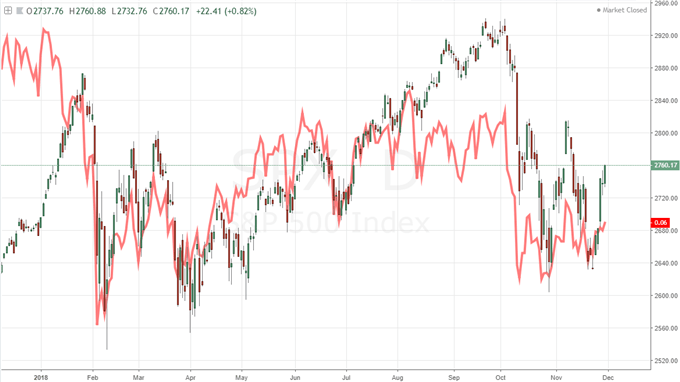 Trade Wars, Brexit, Fed Updates and Other Fundamental Landmines to Keep Track Of

Beyond the loose reference to the high volatility periods earlier this year, the primary reason we should be more wary of volatility through the close of the year is the sheer abundance of key, unresolved fundamental issues. The new trading week will bring with it an inevitable update on the globe-spanning trade war. The US and Chinese Presidents are due to meet on the sidelines of the G20 summit, and ultimatums have been made. The US President Donald Trump said this past week that he has no intention of delaying the increase in the tariff rate on $200 billion in Chinese imports from 10 to 25 percent by the end of the year should no deal be struck. Further, he threatened to move forward with taxing the additional $267 billion in products which would in turn cover all of the country's shipments to the US. Either he follows through with these painful escalations or he doesn't and offers a relief rally. And, lest we forget, there are other fronts to this unfriendly trade environment. Recall Trump also threatened auto tariffs on imports which could pose a serious issue with the European Union and Japan - the United States' two largest developed would counterparts. Another theme that has global implications - even if is uniquely Dollar-oriented - is the Fed's intended path forward. This past week, Chairman Powell stoked a risk rally and Dollar slide when he suggested they may be closer to their 'neutral rate' (the end of the rate hike cycle). He is due to testify before Congress and November NFPs cross the wires at end of week. How this major policy group sets its course will be critically important for the rest of the world - just ask the IMF about emerging markets. Further fundamental triggers to keep close watch over include Brexit, geopolitical pressure, energy prices and more. The objective is not to discover which spark may ultimately trigger unexpected volatility but rather recognize that there are a far too many opportunities to see just that. We discuss December trading conditions in this weekend Quick Take Video. 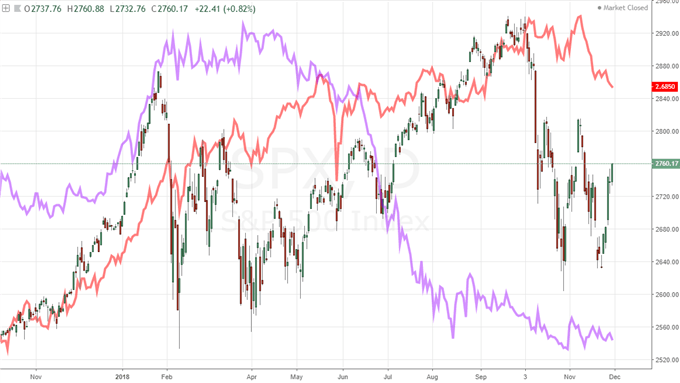