The Dollar's Fundamentals Are Not That Robust

In the short-term, there are a number of tail winds that could potentially support the US Dollar. Risk aversion can still find immediate favor in the greenback, the Fed's policy stance is clearly advantageous is the market wants to reach for any and all yield, and trade wars can have a short-term effect of keeping capital within the US. However, over the medium and long-term those advantages melt away. From the monetary policy perspective, the Fed may be building a yield advantage over time; but the contrast the central bank maintains with its global counterparts is troubling. Can the US continue to push forward with 'aggressive' normalization while its benchmark counterparts believe extreme accommodation is absolutely necessary? One side is wrong, the collective pain by exaggerating the extreme disparity will not help the situation. As for trade wars, the fact that originate in the US is far more significant this go around than the subprime housing implosion in 2008. The United States' actions will draw rebuke and divert capital over time. The systemic risk of the USD's reserve status cannot be overstated. 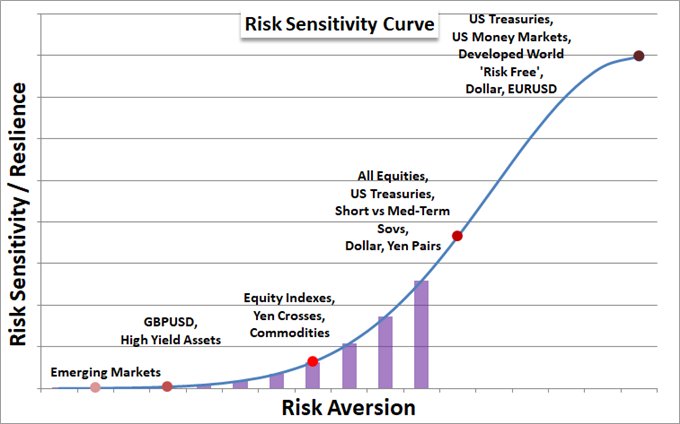 One of the Few Areas Where Risks Can Be Overlooked

When we evaluate the longer-term issues at hand with the aforementioned fundamental themes between the US and EU, China, Canada and Mexico; it is not difficult to see where the fallout readily blows back into American markets. However, there is one segment of the global asset spectrum that won't readily find strength through relative performance: emerging markets. In risk terms, the Emerging Market is at the leading edge of speculative uncertainty. Should sentiment falter, panic will send funds seeking liquidity which EM currencies have no claim to even if there are questions surrounding the Dollar's suitability. Furthermore, in trade wars, the US stands to lose just as much as counterparts like the EU - if not more - in retaliations. Yet, there is very limited capacity for Emerging Market governments and policy bodies to respond with a material return. This lack of negotiation power in this capacity is only compounded by the escalating tension between the major players. And in finally in the context that there is a slow but steady build up for capital to redirect away from the USD as the top reserve, that diversification will favor liquid counterparts (Euro, Pound, Yen, etc) and render little benefit the EM. That is even moreso the case when global growth and the reach for risk will retreat in response to the reduction in viable haven/reserve flows.

What to Watch and How to Watch

If you are following emerging market's response to the evolution of the Dollar, risk trends and trade wars; we can certainly find guidance in the most liquid of the set. I am particularly partial to USD/MXN (the Mexican peso), USD/ZAR (the South African rand) and USD/KRW (the Korean Won). From this group we have key direct US trade partner, high yield carry currencies and politically-sensitive counterpart to the Trump administration respectively. There are trade implications to be monitored and followed for these pairs and others. However, we can also asses something more systemic from their performance individually and collectively. If we see a collective slide from these EM currencies with the Dollar advancing, it can reflect a strong drive in a number of themes - most prominently risk aversion. However, if that FX dynamic finds traditional assets like equities indices stable, it can signify an important turn in trade wars and its victims. In general though, this is a good instrument for measuring the Dollar's health amid such complex fundamental upheaval. We discuss all of this and more in today's Quick Take Video. 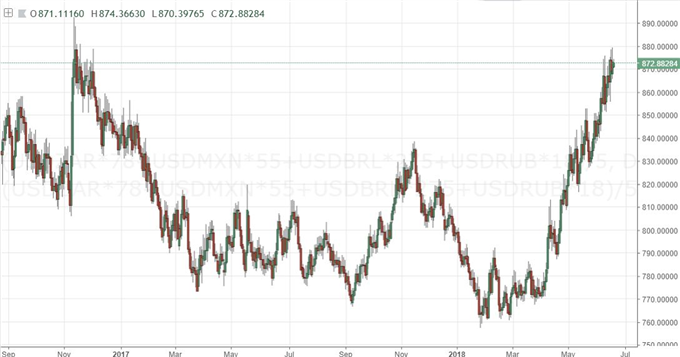