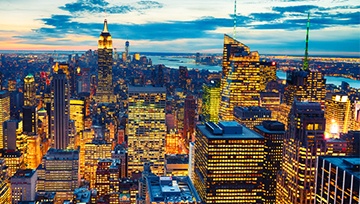 In this webinar, we used price action to look at macro markets as we near the end of the first quarter of 2018. Last week’s rate hike out of the Federal Reserve produced some equity weakness that is continuing to show, even after yesterday’s aggressively bullish rally. And the US Dollar remains in a bearish state, even after the earlier morning rip that saw prices move up to catch resistance at prior support. As usual, we retained balance around the US Dollar, looking into setups on both sides of the Greenback, as we discuss below.

If you’d like to sign up for our webinars, we host an hour-long event on Tuesday and Thursday, each of which can be accessed from the below links:

We started by looking at what appears to be a big area in the S&P 500 around 2660-2666, as there are a number of Fibonacci retracements in this zone of prices. During the webinar, prices scaled-down to a fresh session low, indicating that the selling pressure that’s been showing with a bit more prominence in the equity space of recent does not yet appear to be done. The bigger question, at least on a longer-term basis, is what happens at the 2530 double bottom from early –February? If we do see a higher low here on a failed test, the bullish side remains attractive. But – if February support can’t hold, look out below.

US Dollar Rallies Up to Range Support

That persistent weakness in the US Dollar continued into Monday, as another downside run pushed prices down to the 89.00 level on DXY. This gave the appearance of bearish continuation in a longer-term bearish trend; but as we warned, be careful of getting caught in a trap – with this being both month and quarter-end, peculiar things can happen. And in a trend that’s been as strong and directional as the Greenback has been, this could equate to a very sharp rally very quickly as we near the end of this week. This started to show earlier this morning, right around the European open. Price action in USD made a quick leap into prior range support, at which point sellers came back. Nonetheless, we continued to impose a balanced stance around the Greenback, looking at the most opportunistic ways of taking on exposure on either side of the currency.

EUR/USD In Resistance Zone – Prior Bearish Trend-line as Fresh Support?

One of the more attractive short-USD scenarios is that EUR/USD trend from 2017. Last week saw a bullish break of a bearish trend-line that showed-up off the January and February highs in the pair, and yesterday we looked at a batch of resistance taken from a batch of prior highs. At this point, today’s candlestick body is right in the middle of that resistance, which doesn’t make for much that’s usable at the moment. It can, however, help to highlight a more attractive area of support around that same region that we’ve been following that runs from 1.2335-1.2350, which also happens to line up with the projection of that bearish trend-line that was broken last week. Will old resistance show up as fresh support? 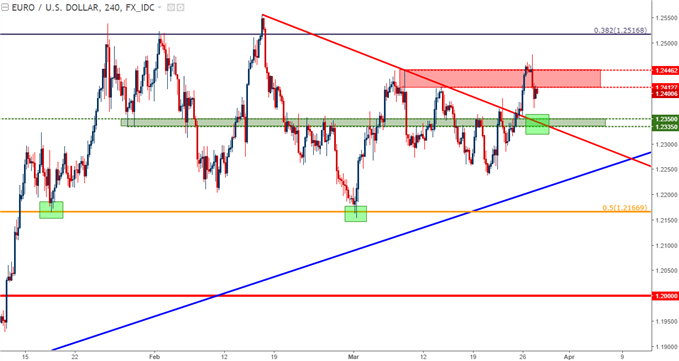 This has been a wild ride of recent. We looked at a bullish set off of the 1.4000 psychological level last week, and then we looked at three levels of support yesterday. After what was a rather climactic ride, the third of those support levels helped to catch this morning’s low, and prices have now moved up to resist at the ‘s1’ of those levels. This makes the prospect of bullish continuation a bit more complicated, but a pullback to the ‘s2’ level that we looked at around 1.4127 can keep the door open for topside setups. 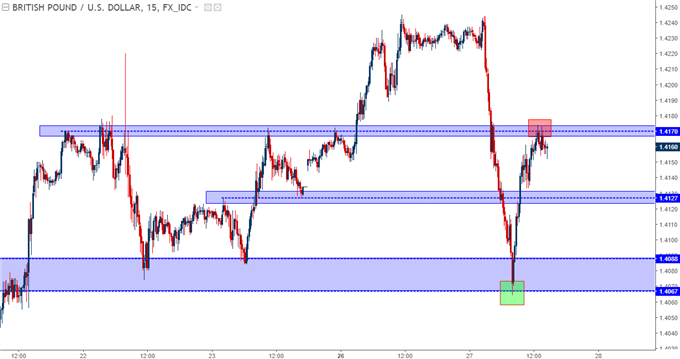 The Canadian Dollar was one of the weaker currencies in the world during February and March; and so far in 2018, CAD weakness has far outpaced the US Dollar. But, since USDCAD topped out last Monday, the pair has continued to retrace. The past four days have seen a bit of support develop around 1.2825, but this feels trappy. We looked at what could be a more attractive support area from 1.2725-1.2750. Other than that, we’re going to need some element of short-term strength to show before there’s enough evidence to act on this well-worn support.

AUD/USD – Look for a Deeper Retracement

Price action has run into support over the past week and even with instances of USD-strength, such as we saw this morning, that support has held up. We moved down to shorter-term charts to focus-in on the higher-lows that have shown, and this appears to indicate a deeper corrective move may be on the horizon. We simply cast expectations for resistance a bit deeper, to that same zone we were looking at last month around the .7850 level.

This may be a bit more actionable than AUD/USD, at least if considering long-USD scenarios. The longer-term area of resistance here is at .7335, as taken from the 38.2% retracement of the Fibonacci retracement around the 2009-2011 major move in the pair. We plotted a shorter-term bearish trend-line to help assist with timing into the setup.

USD/CHF Bears Appear to Be Back

Last week when we looked at this pair, the setup could cut in both ways. Since then, we’ve had a bearish trend-line come into play, a return below .9500 and the initial stages of lower-lows showing on shorter-term charts. All of these factors can highlight the short-side of the setup, looking for a bearish push towards the prior two-year low around .9257 and then the fresh two-year low of .9184.

We looked at Gold prices yesterday, and Gold is rubbing up against the resistance side of a channel taken from the 2016-2017 highs. We looked at two inside support levels, around 1335 and 1326 that could be usable for bullish approaches.