GBP/USD: Bullish Breakout Bumps Above 1.4000 Ahead of CPI, BoE

- The British Pound continues to trade-higher after last week’s breakout above the bearish trend-line that had held the highs since January. This morning saw another bullish breakout above the vaulted 1.4000 psychological level after news of a Brexit Transition plan having been agreed upon, and with two very big drivers on the horizon for this week with tomorrow’s CPI and Thursday’s BoE rate decision, the potential remains for high levels of volatility across GBP-pairs.

- Inflation has very much been a push-point in the year-long bullish trend in GBP/USD, and with the UK having seen five consecutive months of inflation at 3% or more, the Bank of England appears to have their work cut out for them.

Want to see how traders are currently positioned in GBP/USD? Click here for GBP/USD Sentiment.

GBP/USD Sustains Strength With Move Above 1.4000

It’s only mid-day in the US session on Monday and already this week has seen some interesting volatility around the British Pound. The earlier announcement of an agreement on a Brexit transition plan helped to bring bulls back into the currency, with GBP/USD driving above the psychological level of 1.4000 shortly after the announcement. Thus far, buyers have come-in to show support above that price, indicating potential for bullish continuation. But tomorrow morning brings another noteworthy driver with the release of UK inflation numbers for the month of February; and later in the week we hear from the Bank of England at their first rate decision since the hawkish-shift that transpired at the bank’s Super Thursday last month.

The techs that we looked at last week largely still apply, with price action continuing to work-higher within the short-term bullish channel. The bearish trend-line that had previously-held the highs from the January top gave a brief dose of support on Friday; and the bullish breakout from earlier this morning helped prices to re-drive above the 1.4000 level. 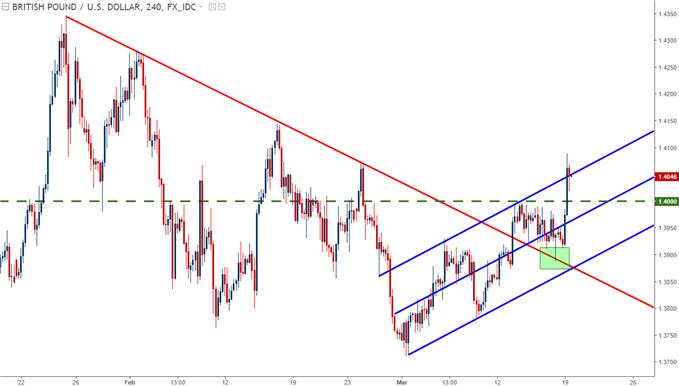 GBP/USD has been on a display of strength for over a year now, with the low from 2017’s Pi Day helping to establish the trend-line of a bullish channel that remains in-force today. With the breach of the bearish trend-line that had built off of the January high, we looked at the prospect of top-side continuation last week, with the first target above 1.4000 at 1.4070 already coming into play from this morning’s breakout. 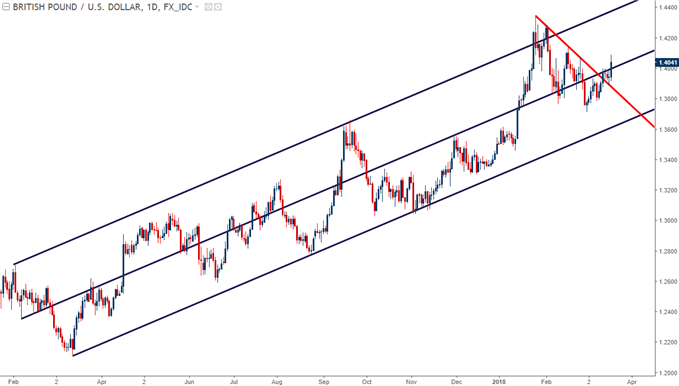 Inflation as the ‘Big’ Driver

It was almost arithmetic, but after the steep fall in the British Pound after the Brexit referendum and the ensuing dovish campaign from the Bank of England, higher rates of inflation were on the horizon. The big question was how far and how fast, and we’re just now starting to get answers to both of those questions; and it’s to the degree where the Bank of England can no longer rest on their laurels with ‘super accommodative’ monetary policy for fear of a Brexit slowdown.

Inflation crossed 3% in September of last year and hasn’t yet touched-below. This brought us a rate hike in November, the first in over ten years out of the UK, along with the February warning of more. The expectation as we approach tomorrow’s print of February inflation numbers is for a 2.8% read. 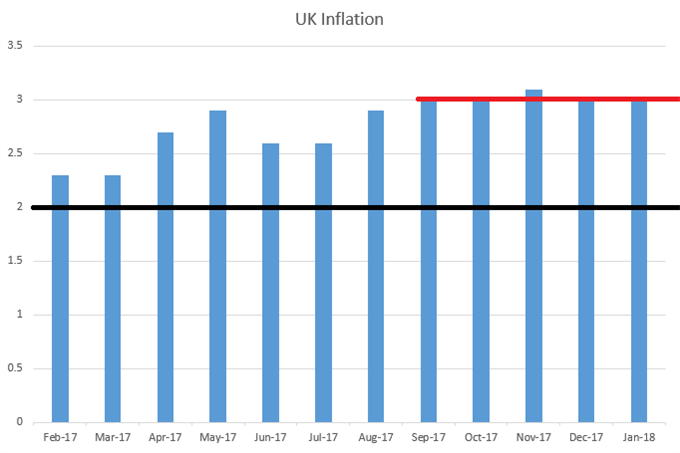 Tomorrow’s CPI report leads into Thursday’s Bank of England rate decision; and in-between we have an expected rate hike from the Federal Reserve on Wednesday. This is the time to be defensive and cautious, and traders will likely want to avoid chasing fresh breakouts. While it’s unlikely that anything big will take place at the BoE on Thursday, market participants will be looking for any possible clues of a rate move at the bank’s next Super Thursday in May. Hawkish leans or tilts from BoE Governor Mark Carney will likely lead to a continuation of strength in the pair; but this is taken under the presumption that no game-changing moves show in the US Dollar at Wednesday’s FOMC rate decision.

If GBP/USD finds support around the psychological level of 1.4000, which had previously helped to carve-out resistance when prices were on the way up, bullish setups can be investigated with stops below the prior swing-low of 1.3889. We’re demarcating the 25 pips ahead of that 1.4000 area as a potential zone of support, as 1.3975 had helped to set the final swing-high before that trend-line projection played-in as support. 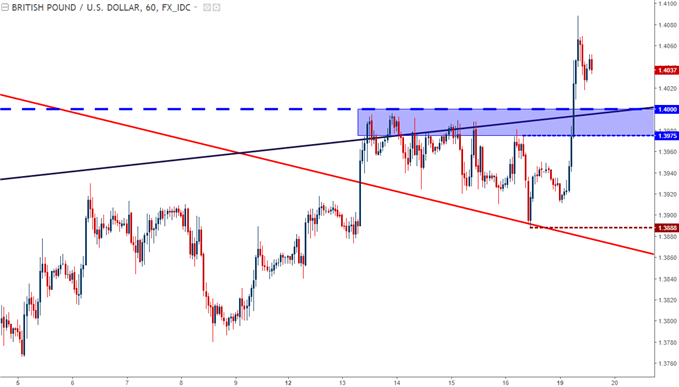