See how retail traders are positioning in USD/CAD and USD/CHF intraday usingthe DailyFX speculative positioning data on the sentiment page.

What Makes for the Perfect FX Trade

First of all, there are no perfect trades. Putting capital to work in the expectation of return is always a probabilities game. We can use analysis and strategy in an effort to shift the probabilities in our favor, but we can never alleviate the element of surprise from participating in the market. When filtering out opportunities, there are certain high level considerations which can help sort signal from noise. Looking beyond the need of a loaded technical picture and fundamental theme or trigger that can reasonably provide motivation, there are equally foundational requirements that too often go overlooked. One of the most important needs in establishing a higher probability trade is reducing the cross winds so that a more directed opportunity can play out unimpeded. In the FX market, two currencies establishing a single price can prove a burden when there are strong fundamental winds arising from both sides. That said, there is often enough churn from one currency in most pairs to cause the market to spin its wheels rather than provide traction for a trade.

CHF: Reducing the Noise to Boost the Signal

One of the principles of fundamental trading is the reduce the number of variables. The more moving pieces there are in any scenario with multiple possible outcomes, the greater the end array of possible outcomes. If, for example, we had five key themes to establish a specific direction and trend in a market, four of those elements can align yet the fifth present enough of a conflict to undermine the drive that could otherwise arise. If there is only a single critical facet to the market, it is far easier to monitor its motivations and to plot out possible courses to take. One of the best ways to significantly reduce the spectrum of conflicting scenarios in FX trading is to pick a currency among the crosses that is generally lacking motivation. Among the majors, that is the Swiss Franc. Though the currency is sliding, there is little drive behind the move. It instead finds most of its movement among its pairings from its counterparts. 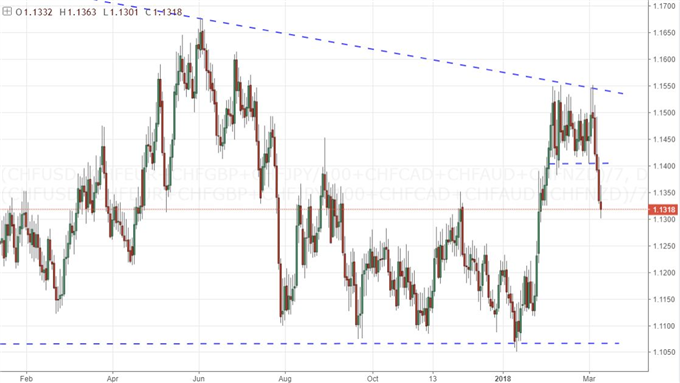 To further improve our trading options, the active currency among the trades we pursue should have both active motivation for movement and a streamlined fundamental backdrop. The Euro or Dollar are poor examples of this requirement. For the Euro, there is a dubious overreach on ECB rate speculation, the lingering risk of the Italian elections as yet unresolved and burden of US tariffs. For the Greenback, the Fed rate forecasts have deviated widely from the performance of the currency and the rise of a global trade war is centered heavily on the largest economy. From the Canadian Dollar, we have a number of lingering issues that culminated in a significant decline: cooling domestic growth, a tempered BoC rate forecast following a few hikes and recognition as one of the primary whipping boys to global protectionism. That said, this uniform bearish drive has earned a steep discount for the Canadian Dollar, which opens it up to possible relief. And, that is exactly what we saw start to take this past week when the US made the country exempt to its new tariffs despite its previous threats of a universal application. A rebound started, and there is likely more to come given the depth of the one-sided preceding move. 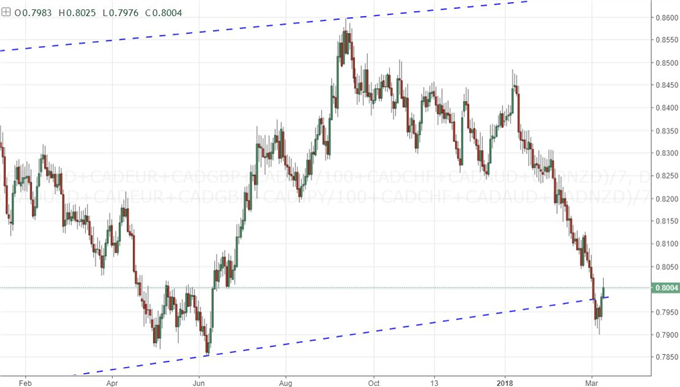 What CAD/CHF Has to Offer

When we combine the tepid influence of the Swiss Franc and the fundamentally-charged but skewed opportunity of the Canadian Dollar, we are met with a considerable opportunity in CAD/CHF. We can see the technical shape this pair has taken on the chart. A deep decline has already seen a significant correction from a notable support level. This offers both the perspective of a reversal and a check back into a wide range. Follow through is always a variable that requires constant tending and assessment, but the depth of the initial slide suggests an equivalent rebound. We discuss the appeal of an unusual cross like CAD/CHF in this weekend Quick Take Video.