Market conditions have been extremely reserved this week, but we managed to downshift even further through this past trading session. I have been keeping close tabs on the technical milestones for the markets. Through Thursday trade, my preferred ‘one look risk measure’ (the S&P 500) carved out its third smallest daily trading range of the year. The range on the week – so a rolling four-day high to low – is the smallest of 2022 thus far. Furthermore, participation as measured by volume is the lowest of the year as well. Whether you are a true believer of the bull trend we’ve seen form through this past month or expecting an imminent reversal from the 200-day simple moving average, it seems that conviction is in short supply. That fits the liquidity conditions that we have been talking about consistently as of late. August, historically, represents the absolute nadir in trading day-adjusted volume for the benchmark S&P 500. So, while I do fully expect a break moving forward; it is more probable that a spark for a break awaits a key fundamental charge like next week’s Jackson Hole Economic Symposium while the restoration of a trend stalls until liquidity fills out. 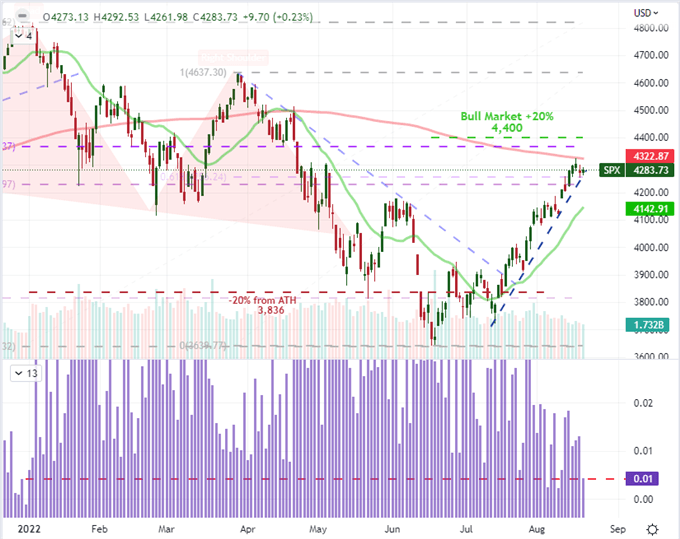 As we continue to suffer the absence of a wide swath of the speculative community (mainly institutional and professional participations), we will continue to see the appetites of the fringe drive unusual corners of the financial system. Over the past week, the focus has been trained back on the meme stocks with a particular emphasis on Bed Bath & Beyond. The thinly traded (relative to the macro assets we usually discuss) stock was bid sharply higher on extremely high volume thanks in large part to heavy discussion in reddit boards along with the explicit interest from the like so activist investors like Ryan Cohen. However, the massive 20 percent correction we’ve seen this past session is what happens when you are dealing with volatility. Reports of Cohen exiting his stake and a university student pulling a remarkable profit from active trading in BBBY represents the kind of fodder that isolates retail interest rather tapping into the larger macro picture. What is one to expect in these market conditions? 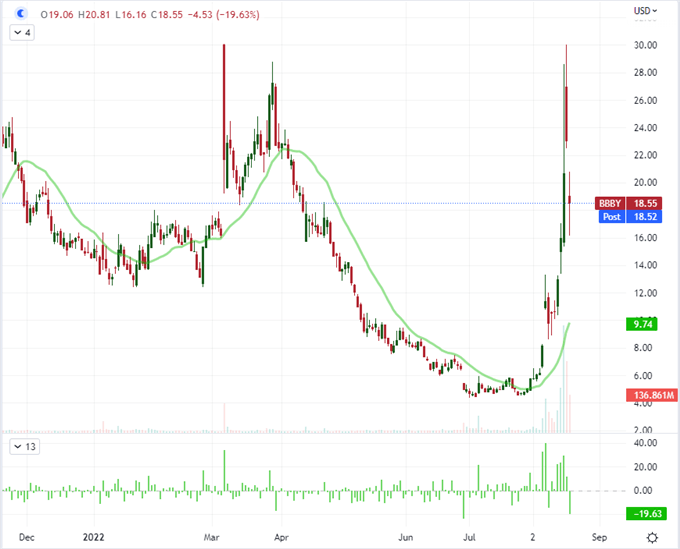 As the Markets Favor Ranges

Speaking of the state of market conditions, it does seem that bouts of volatility are burning out very quickly such that significant technical barriers refuse to fall. If there is a serious pressure heaped on the technical barriers to be found on the major assets, I don’t think they will necessarily hold to the market’s pressure. However, liquidity is draining inspiration before it can ever form a serious head of steam. That is pushing me more towards patterns that look well-established for range. Perhaps one of the most heavily weighted benchmarks sporting a major range is EURUSD. The general floor is the parity (1.0000) that has draw the attention of every market participants. The upside is defined by the 1.0350 August swing high and multi-month trend channel resistance. Generally speaking, we consider retail trading habits a poor guide to investment views; but the retail crowd may be better capable of evaluating a market that suits such a group’s proclivities. 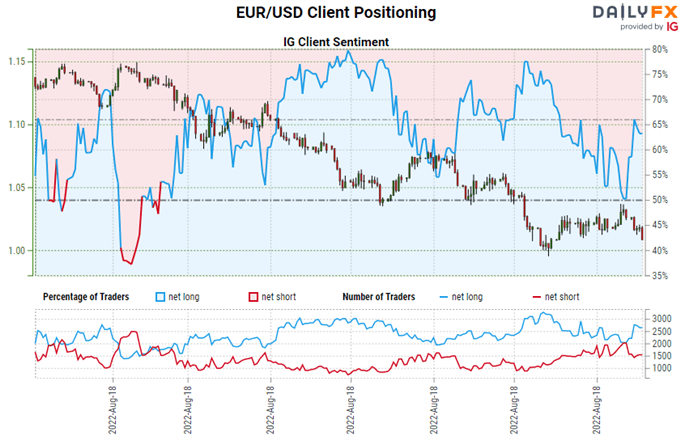 On the fundamental side of congestion, the aftermath of the RBNZ rate decision speaks to a more frustrating truism: that rate forecasts are well priced in and many of the majors are on a similar path. Despite the central banks rate hike and forecast for more tightening moving forward, there has been little-to-no lift for the Kiwi Dollar. The hawks may say that this is just a sign that the outcome was fully priced in, but I consider it a reflection of distortion whereby hikes between the most hawkish players are keeping a very similar tempo which happens to curb the appeal of a currency that is really only considered a ‘major’ owing to its high yielding yet triple-A government deb yield. 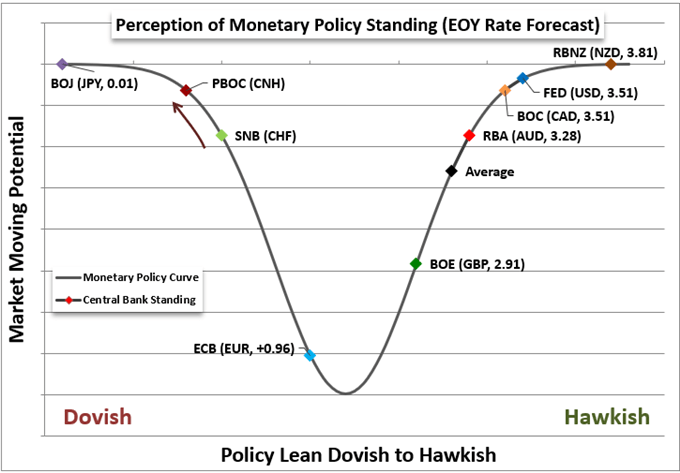 While market conditions are generally suppressive of significant market movements, there seems to be specific event risk that is fostering serious market reaction. One such area of interest is the closely observed central bank policy course. China’s easing to address its local housing troubles is one thing, but the surprise 100bp rate hike by the Turkish Central Bank despite 80 percent inflation, reflects the uneven macro picture we continue to process. This may not seem a world’s market issue now, but beware the carry over latter down the line. 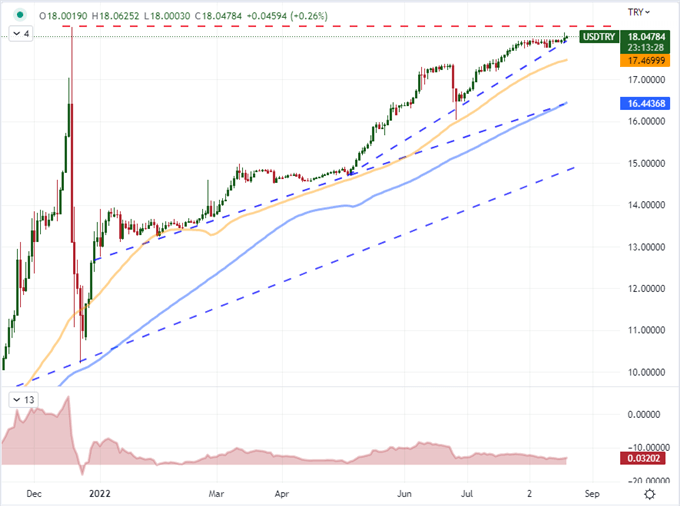 Speaking of event risk, there is next to nothing on the macro docket for release over the coming session – at least not anything that would be considered systemically important. The UK and Canadian retail sales reports are worthy of absorption, but influence of previous and more critical events has likely weighed the market’s willingness to respond to online reports. Looking a little further into the future, there are important PMIs for August due from Standard & Poor’s as well as the Jackson Hole Symposium. What can these events due to market response? That is the focus for event risk for the immediate future. 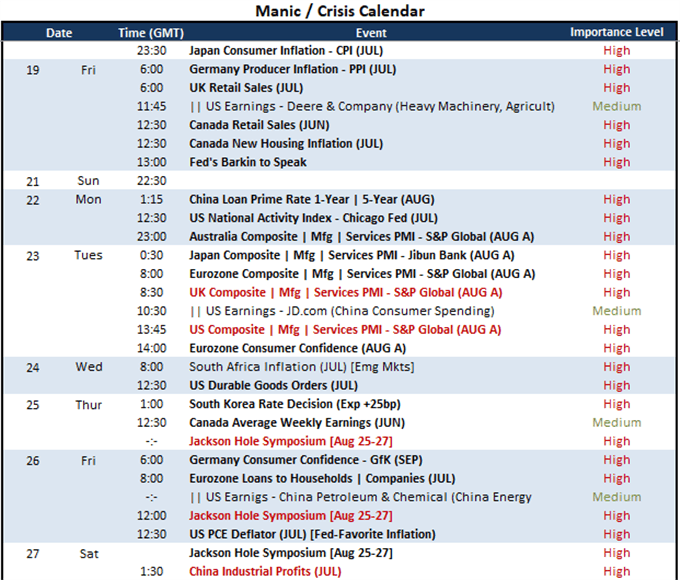