EURUSD Falls on Economic Contraction Concerns, Parity In Focus with FOMC On Tap

Markets Are Stirring to Life as the Fundamental Waves Grow

The broader and more ambiguous a fundamental influence is for markets, the more indistinct and exaggerated its impact. When it comes to the threat of a recession, there remains serious debate around the United States and other major economies ability to engineer a ‘soft landing’; but the evidence continues to mount that significant contraction may ultimately be unavoidable. This past session, we were faced with high profile scheduled events, surprise headlines with an economic context, earnings with a clearly macro bent and as official a global forecast as global investors tend to entertain. All of it eroded the foundation for hope in avoiding an economic slump. Looking to market activity this past session, risk leaning assets seemed to register the fundamental downgrade, but there wasn’t much technical progress that speaks to conviction. From my preferred (imperfect) ‘risk’ stand in, the S&P 500, Monday’s most reserved trading session since the year-end 2021 holiday season transitioned to the biggest single-day drop in a month. There are still important technical support levels to contemplate, which makes for a loaded FOMC rate decision event later today. 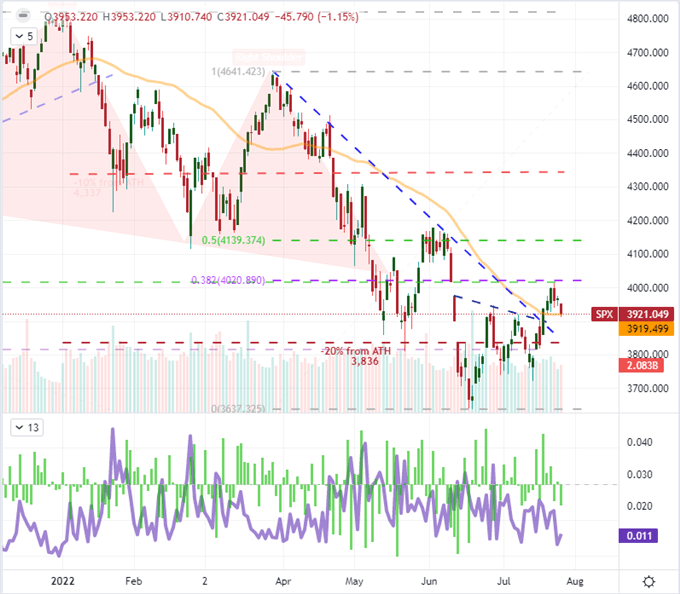 The Risk of a Recession Rose Modestly – Awareness Jumped Sharply

While the focus over the immediate future – the next 24 hours – is distinctly drawn to the Federal Reserve’s monetary policy decision and forward guidance; the weightier issue heading into August is the pace at which official recession’s are approaching. Of the scheduled and unscheduled updates around economic health this past session, the most comprehensive and forward-looking development in my book was the IMF’s WEO (World Economic Outlook). The world’s economic forecast was cut 0.4 and 0.7 percentage points to 3.2 and 2.9 percent for 2022 and 2023 respectively. For the United States, the current year’s projection was cut hardest at a -1.4 percentage point drop (to 2.5 percent), China saw its own outlook cleaved -1.1 percentage points (to 3.3 percent) and the Eurozone got by with a modest -0.2 percentage points decline (to 2.3 percent). These are annual figures, so they don’t cover the loose ‘two consecutive quarters of economic contraction’ definition of a recession, but even that standard bearer has been disputed by the US-based NBER not long ago. Not having a clear definition on recession and a body to designate it makes this a fundamental line that is difficult to follow…and assess its terminus. 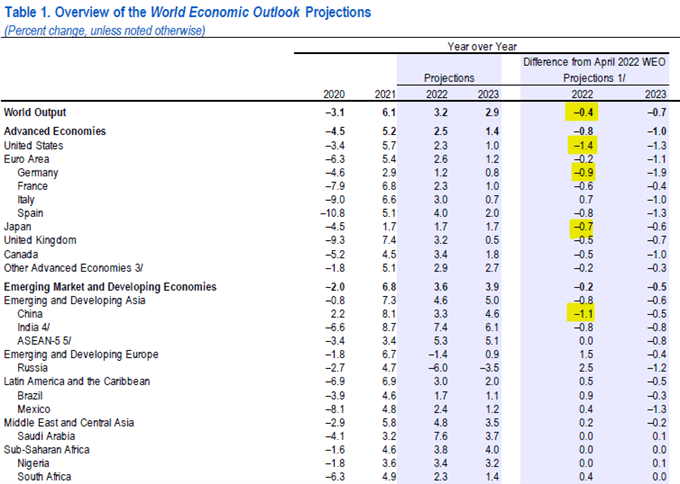 In terms of ‘official’ data with a growth bent, the US and Eurozone 2Q GDP figures due Thursday and Friday will be paid their proper respect through anticipation, but the data will be treated with something of a skewed perspective. If they report favorably, it will be easy for skeptics to default to the more timely data to say that these broader measures are simply delayed. In contrast, the Conference Board’s consumer sentiment survey speaks to current conditions with a bias towards forecasting. The ‘expectations’ component of the measure dropped to a new 11 year low, but it didn’t really change the historical standings. This update is disappointing but not treated as severe (like the UofM June update), but don’t forget the economic impact the collective US consumer has on the global economy. 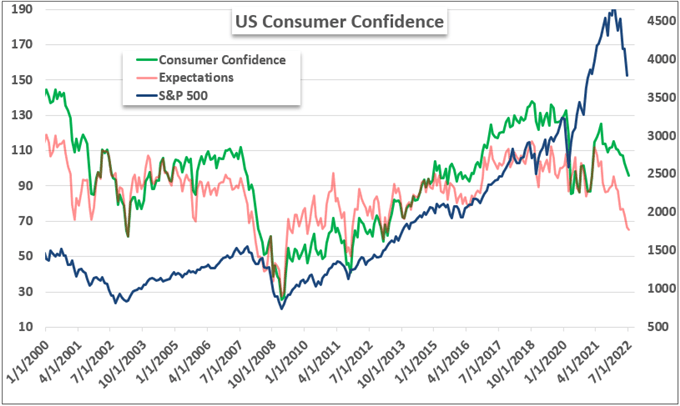 Earnings and the Unconventional Recession Measures

While the IMF’s forecasts and official economic data points offer the convenience of definitive updates, it was the ancillary and unexpected that really surprised me on the growth front this past session. Earnings is typically processed as a ticker-specific read, but the macro aspects of this corporate reporting are where my interests truly lay. In the wake of Walmart’s lower guidance owing to higher costs to consumers, the ‘better than expected’ EPS for UPS didn’t keep the stock in the green. GM outright missed the target between supply chain issues, higher funding costs and more conservative spending trends. For Wednesday’s open, despite the focus to the afternoon central bank event, I will be watching to see how Google and Microsoft trade in early hours. Both companies missed forecasts - $2.23 vs 2.28 expected and $1.21 vs $1.27 expected EPS respectively – with reference to difficulty in spending and a exchange rate costs (high Dollar). Nonetheless GOOG and MSFT were holding up afterhours. After Wednesday’s close, keep an eye on Meta (formerly Facebook) and Ford reporting and keep that macro perspective. 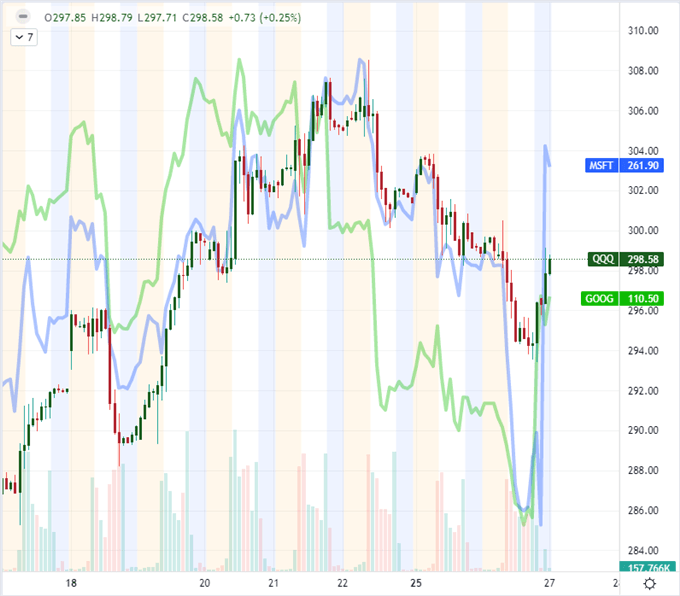 Another impressive market-mover without the creds of the traditional economic calendar event was the headlines from Europe that the region had agreed to ration gas to curb the capital flows to Russia as it extends its invasion into Ukraine. Setting aside the aims of the geopolitical move, this throttling of energy consumption will most likely translate into throttled growth – so much for that the relatively mild IMF downgrade for the region. Notably, EURUSD dropped around 1.0 percent Tuesday, but it wasn’t the Dollar and the heavy speculation around Fed speculation that charged the move. Instead, it was the Euro with its dimmed economic prospects as can be seen in a comparison to EURJPY and EURGBP. Now, parity is once again in easy reach as a very capable event risk is on tap. 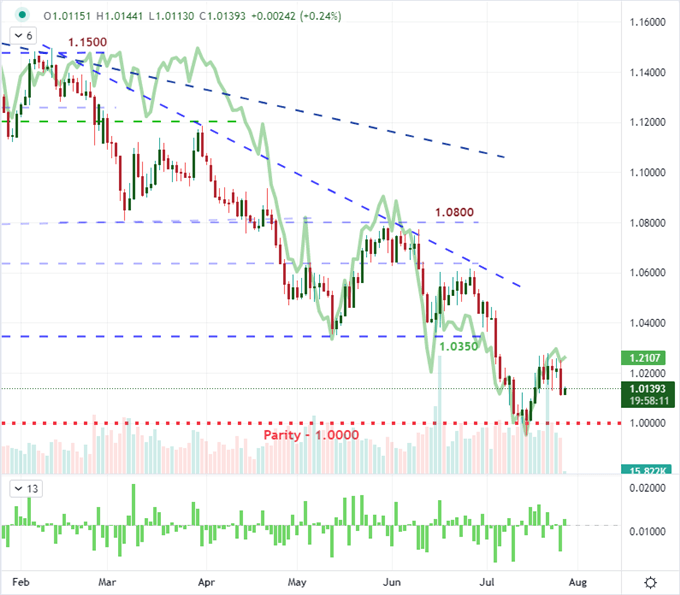 Lots on Event Risk but One Focus

There is plenty of scheduled event risk over the next 48 hours of trade. It will weigh into recession speculation (US 2Q GDP, durable goods), monetary policy stance (Australia CPI) and capital market views (earnings); but the FOMC will be the even that blocks out the sun. For the interim, a major event risk like this will absorb our attention leading into its release and will alter the interpretation of what comes after. That said, these many events are not simply going to be left in the wash of the US central bank. How the scene is shaped for growth and investor confidence moving forward, we will see the bias fortified or altered moving forward. 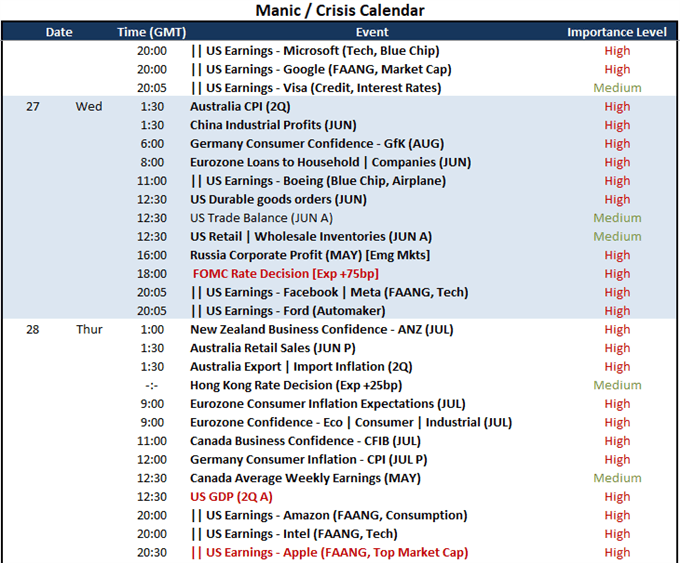 All told, the top event risk for Wednesday’s session is clear. The FOMC rate decision may not be one of the so-called ‘quarterly’ events with updates to economic and rate forecasts, but it nevertheless heavily contentious. We have seen speculation of a 100 basis point rate hike from the US authority hit a peak of approximately 80 percent this past month when the fundamental updates prioritized inflation pressures. Since then, however, the chances have dropped significantly to about a 25 percent probability. The baseline expectation is for another 75bp hike which – as remarkable as it is historical context – may be treated as a ‘in-line’ outcome. It is the peripheral material like the policy statement and Chairman Powell press conference remarks that really holds the potential here. Mind the market’s response. 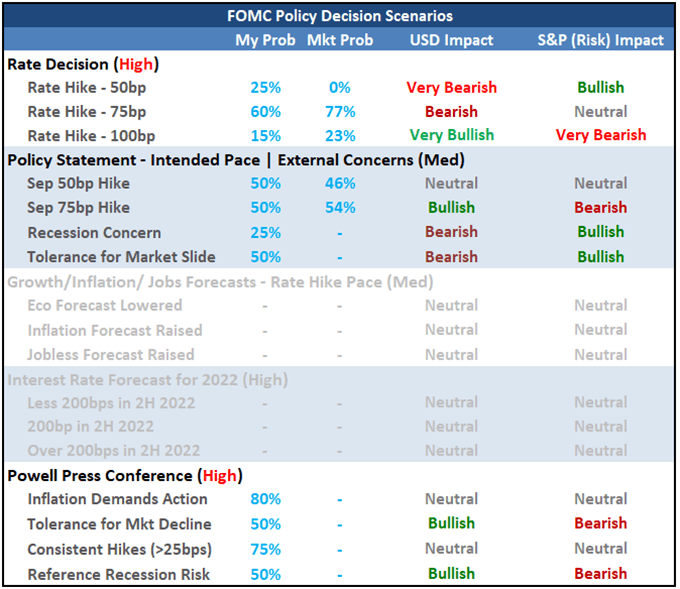