S&P 500 and Company Rising ‘Because Of’ or ‘Despite’ Earnings?

Depending on what measures you track for your evaluation of ‘risk trends’, this past session may have registered a certain bullish persistence. While the Nasdaq 100 led the charge from US indices with a robust 1.6 percent rally, the S&P 500 – with a 0.6 percent advance of its own – remains my central measure. The rally the previous day, Tuesday, offered up a far more impressive rally at 2.7 percent with the first close above the 50-day moving average in 60 trading days. The implications that carries for the view of follow through arguably carries greater weight for market observers eager for a clear trend. Yet, bullish commitment is still a seriously improbable course in my assessment of the market. Not only are we battling the headwinds of seasonal liquidity at the moment, but there remains systemic fundamental issues as well as anticipation for grander events next week (IMF forecast, US GDP, FOMC, etc). For statistical reference of my skepticism, the climb in US stocks seemed to materially deviate from European equities, emerging market assets and carry trade. It is possible that SPX leads the pack, but I generally prefer conformity when assessing sentiment. 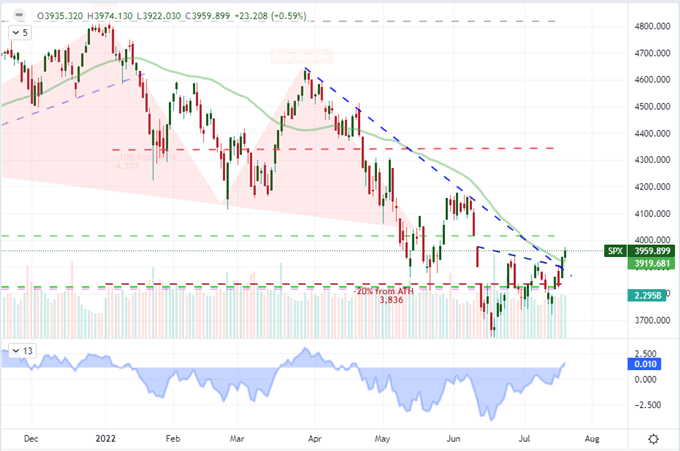 For a near-term speculative charge, the docket was not offering us much in the way of actional event risk this past session – and the Thursday calendar is much the same. The exception to the rule is earnings. While there are a lot of macro themes that we can draw from key stock reporting – well beyond a bullish or bearish view of the ticker in question – my interests are following the most systemic of matters for the financial system. This past session, the attention was on Netflix which managed to rally in afterhours trade by ‘only’ losing -970,000 subscribers while both EPS and revenue fell short of expectations ($2.14 and $7.87 billion respectively). If you discount the NFLX gap, the stock ultimately moved little on the day. That is not a roaring endorsement for a bullish mentality whereby traders are simply looking for any reason possible to rush back into the market and ‘discounted assets’. I will be watching to see how Tesla (TSLA), CSX and Alcoa (AA) trade in the upcoming session with a similar macro interpretation. There are considerable speculative, growth, supply chain and inflation considerations at play with these tickers; but first and foremost, let’s see how the markets treat these shares. 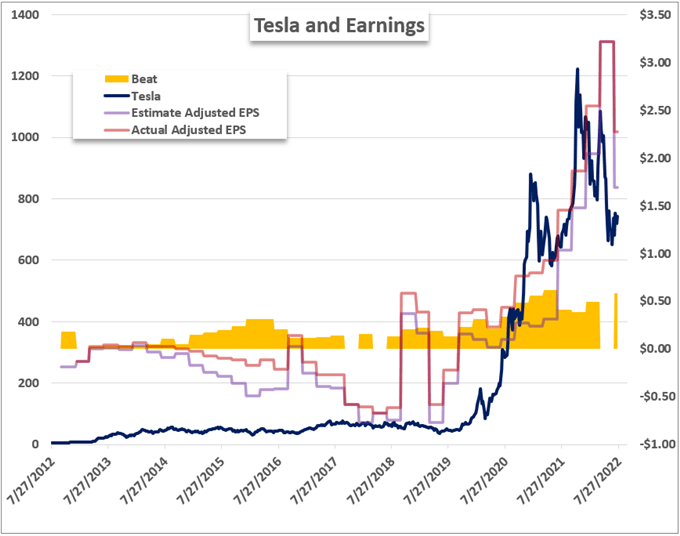 A Fundamental Focus Shift from Growth to Monetary Policy

In the end, we are likely to see the capital market’s overall sentiment trend conform to growth assessments for the global economy, but the interim will be colored by high-level event risk that can stir such themes. I am looking ahead towards the July PMIs from S&P Global due Friday. As good as these measures are as a timely proxy for GDP to key economies, it is end-of-week event risk ahead of ‘official’ growth readings (like US 2Q GDP) and respected forecasts (IMF WEO update). It is more likely that monetary policy is the next 24 hours principal concern. On my radar, there are two major developed central banks and two large emerging market central bank rate decisions to watch. In the latter category, the South African Reserve Bank (SARB) is expected to hike 50bps which may not halt the USDZAR rally. Fulfilling a holding from the Turkish central bank would more distinctly fail to turn USDTRY off its return towards record highs. For a global influence, the attention should be focused on the European Central Bank (ECB) and Bank of Japan (BOJ). 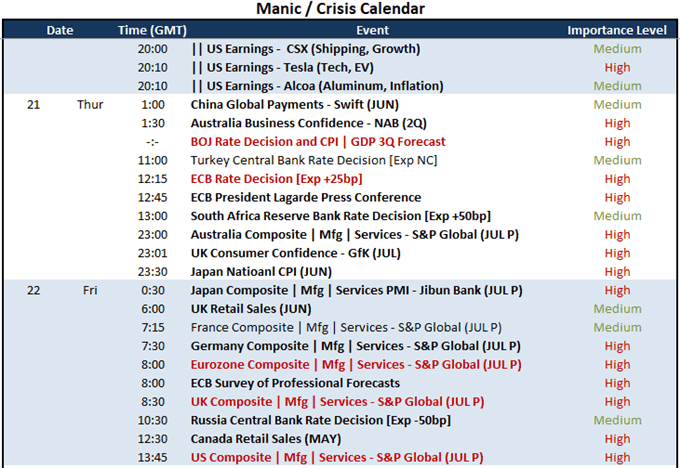 Monetary policy amongst the world’s largest central banks has taken a noticeably hawkish shift these past months. The effort to tighten is a deliberate endeavor as it intends to restrain rampant inflation. That said, while the Fed, Bank of Canada and Bank of England have forged ahead with their hawkish reversals, we have not seen an utter collapse in risk trends raised on an assumption of endlessly-beneficent central banks. That may be a lingering sense of skepticism over the commitment to fight price pressures and stagflation; or it could also be a byproduct of a somewhat bifurcated policy regime across the globe. While the Fed and company are clear hawks, there are very prominent doves as well. The PBOC may be the largest overall accommodator, but the BOJ and ECB are dominant players with more direct connection to the Western world. 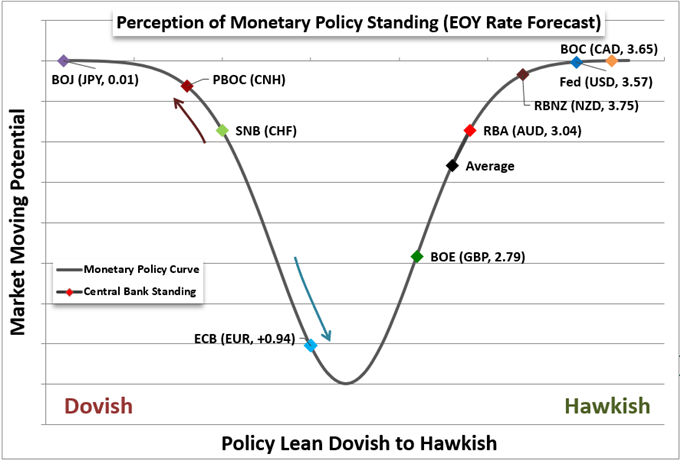 The Key Players for Thursday: Euro and Yen

In terms of influence, a ‘disappointing’ take from the European and Japanese central bank policy decisions could spell a serious fallout for general risk trends, but there is also serious capacity for volatility for more targeted regional assets such as the Euro and Japanese Yen. In the case of the former benchmark currency, we experienced a three-day rally for EURUSD Through Tuesday – one of the strongest in a few years – which is likely a check against stretched risk positions before the key event risk. The ECB rate decision is expected to result in a 25bp rate hike according to the economist consensus from Bloomberg, but there has also been plenty of speculation of a bigger 50bp jump following bigger jumps from the likes of the Bank of Canada. This is the second largest developed central bank in the world. Don’t forget what the implications can be for a pair like EURUSD – even if the ECB is well behind the Fed – or speculative appetite in general that has been built on the narrative that central banks always stand ready to help…investors. At the very least, expect some interesting takes on how the ECB’s actions will channel through its fragmentation approach while Italy suffers its latest bout of political instability. 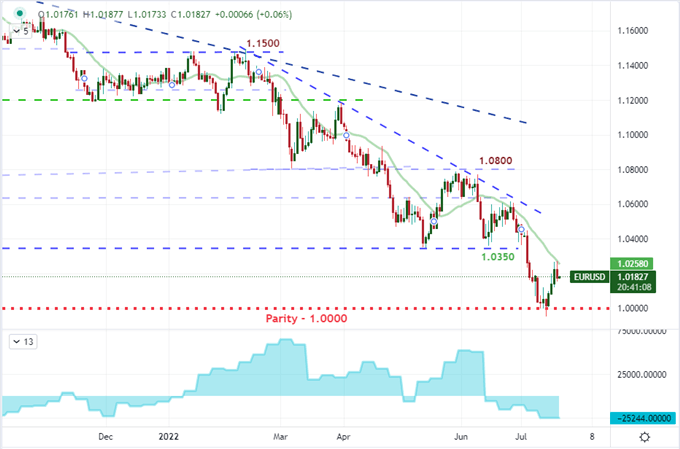 Compared to the ECB rate decision, macro observers are likely to treat the BOJ update with a greater sense of ambivalence. That would not be wise decision. While it is true that there is greater nuance in the speculative forces around the ECB, the Japanese policy model is arguably far more important. The developed world’s third largest player is not expected to alter its policy course, which directly defies the global norms. If that is the course they take, it can create further exchange rate problems as pairs like USDJPY extend 24-year highs. On the other hand, any sign that the policy authority is doing anything other than covering its eyes and pumping stimulus could result in a serious speculative shift. As such, keep close tabs on the updates 3Q GDP and inflation forecasts from the BOJ. 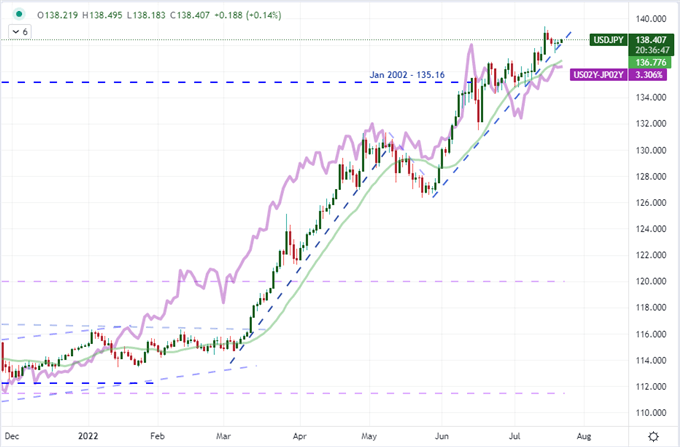