There is little support for enthusiasm for risk taking through the traditional fundamental channels. Growth forecasts continue to deteriorate, inflation is eating away value and the central bankers continue to cast strong warnings that they intend to persist with tightening regimes despite the struggles of those in the capital markets. Nonetheless, one of the most prominent technical reversal patterns to be found among speculative benchmarks stalled out this past session. In particular, I’m referring to the S&P 500’s nearly 10-month long head-and-shoulders pattern which finally produced its technical reversal with a ‘neckline’ break jus over a week ago. And yet, the rally from this past session would distinctly disrupt the pattern by breaking momentum but not really mustering the enthusiasm of the bulls. There is too much discord among other risk outlets and little-to-no foundation for the enthusiastic bull to really lean into a recovery rally. So we should weigh our proclivities: choppy advance or volatile slide. 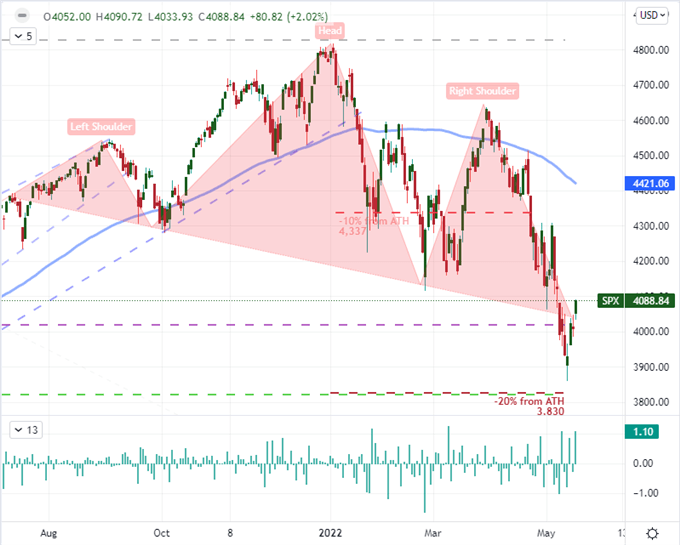 There is so much interest in the direction of the market (understandable) that we often lose site of factors that are perhaps more important to navigating the markets: the penchant for volatility and the ability of persistence for trends. Higher volatility means markets are more prone to turn with little notice with a particular skew of productivity when it manifests in a move to the downside. As it stands now, the reading on a risk of volatility is exceptionally low. Rather than just referencing the traditional VIX index, I’m looking to the ‘volatility of volatility’ measure the VVIX. Though it takes a minute to appreciate what it is measuring, this is a gauge that reflects the propensity of markets to turn from quiet to active rather than just represent our current state. It is worth nothing that the VVIX has dropped back to levels commensurate to the lows we’ve seen back to early 2020. We could read this a systemic shift, but I would argue it is another pullback in a larger range. 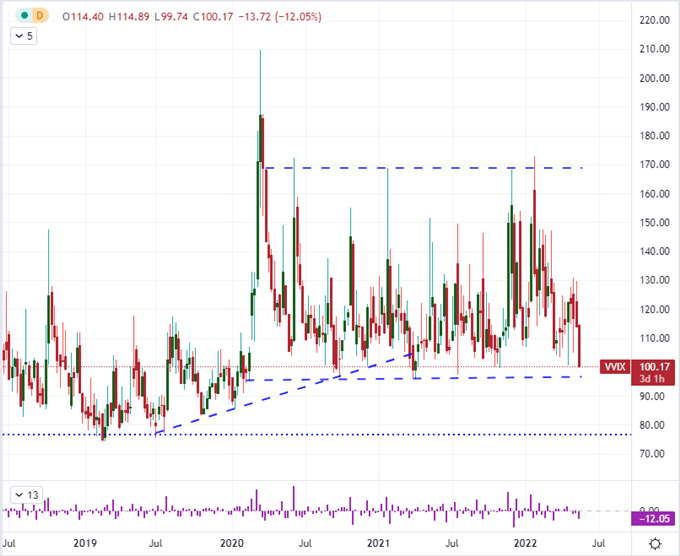 The Fundamental Themes That Matter

Assessing the status of the market is one thing. Tracking the probable catalysts for risk trends moving forward is another. We started off this week with a focus on economic health with a notable downgrade in growth readings for the US (via Ben Bernanke), China (through April data) and Europe (with the European Commission’s forecast); and there was more to digest this past session. Notably, both retail sales and industrial production out of the US would feed the since that the situation is ‘not dire’, but that didn’t really translate into direct market readings of relief. Perhaps the slump from corporate giant Walmart after its earnings has snuffed the move. More interesting to me this past session was the development of interest rate expectations – particularly that in the US. A number of Fed speakers were on tap with a general hawkish measure, but I was most interested in what Chairman Powell had to say given that he reiterated inflation was the number one priority and that he considered what we have seen thus far in markets has been ‘orderly’ – meaning he will tolerate further capital market retracement without changing his monetary policy view. A further 50bp rate hike is priced through the next three FOMC meetings.

What is remarkable to me is that despite the escalation in US rate forecasts – a relative advantage when all else is set equal – the Greenback actually lost significant ground this past session. In fact, the trade-weighted DXY Dollar index suffered its third worst trading day (-0.9 percent) in 18 months. Generally speaking, the US currency has a strong fundamental tail wind, but it has also priced in considerable favor through fundamental projections these past months. Seeing the market loose altitude despite positive news suggests we have reached some ‘saturation point’ for bullish enthusiasts. That doesn’t mean it can appreciate further, but it does suggest lift will need to come through more meaningful levers. 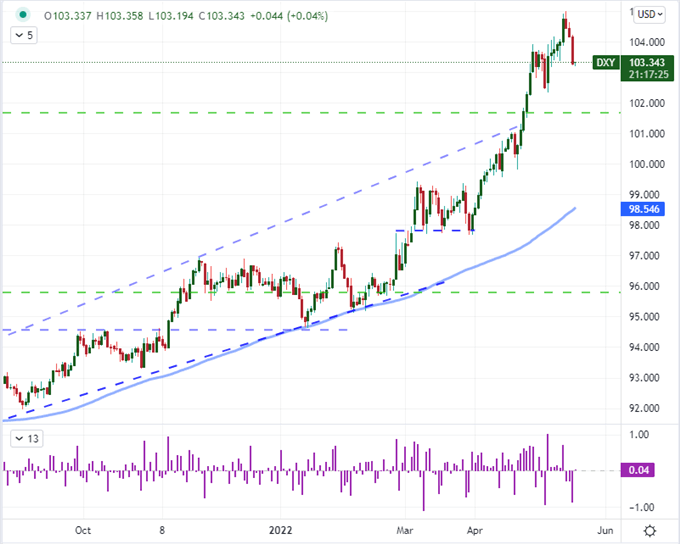 The Dollar-Based Majors that Should be Watched Closely

While I’m dubious of the Dollar’s retreat, I cannot deny its impact in the markets. The DXY measure is a trade-weighted index, so there is little surprise that EURUSD looks like a mirror of the broader measure. The rally he benchmark cross was a significant rally – the biggest in two months – but it doesn’t clear even medium-term resistance. That would be represented in the 1.0635 current range high that has significant history as former support. The Dollar’s slip plays a big role here, but so too did the Euro’s own gain after ECB member Knot supported speculation of a July hike and said a 50bp move should no be written off. What is interesting is that while EURUSD managed to break against the Dollar, the USDJPY cross I’ve monitored so closely has not. The balance in risk trends seems to be counteracting the Greenback’s outright slide. I am interested in most of the major Yen crosses, but USDJPY stands out beyond the pack owing to its ability to prioritize fundamental pressures. 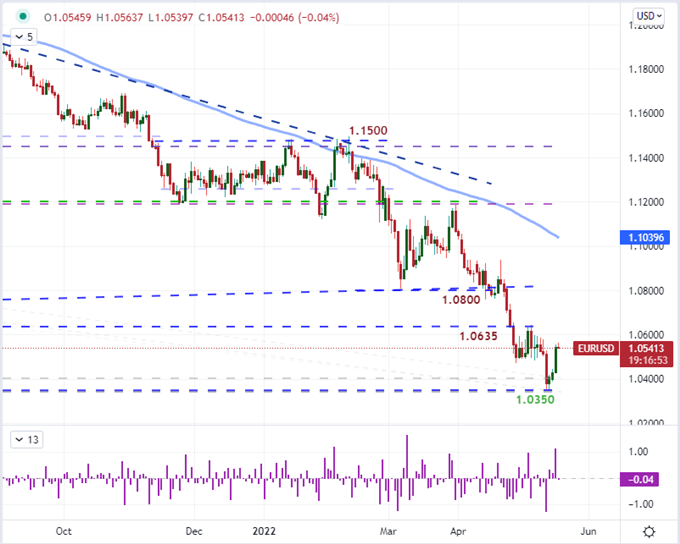 While EURUSD’s move this past session may have stood out, GBPUSD’s rally takes the ribbon. It is worth noting that rate forecasts for the ECB lifted this past session, helping EURUSD; but the Cable was a significantly grander performer this past session. The rally we would register was the biggest since October 2020 and is a dramatic reversal from a poorly established (at least technically) low. With rate forecasts and growth projections playing a role in market bearing, it is worth tracking this dramatic move through the UK inflation statistics’ update. Another pair to watch with a similar mix: USDCAD. If you really want to see a loaded but technically provocative technical pair, consider GBPCAD. 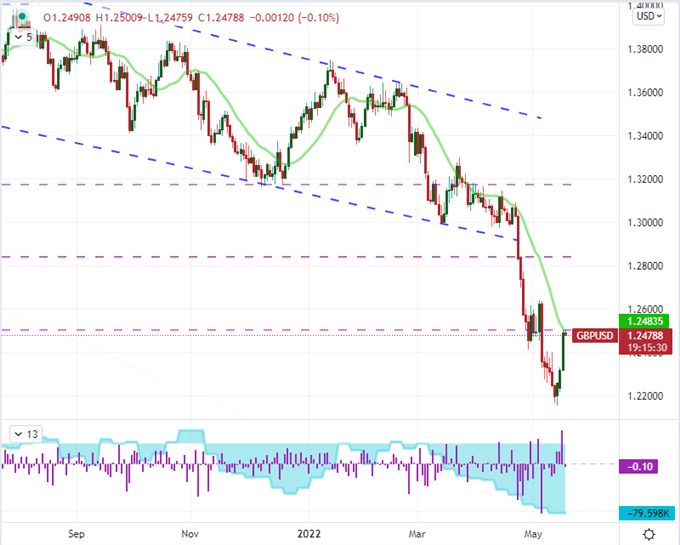