The past decade has shown that us that market sentiment is hardy. In the face of trade wars, economic throttling and even an ongoing pandemic; markets have consistently reverted back to a ‘risk on’ mentality. As such, perhaps it isn’t that surprising that US indices and other sentiment benchmarks charged higher this past week despite the third week of Russia’s assault on Ukraine while the Federal Reserve stated clearly its intentions to drain excess liquidity from the market in a bid to fight rampant inflation. It would certainly be ‘convenient’ for bullish interests to prevail in this traditionally long-only asset class, but the financial backdrop is not nearly as inspiring of conviction as it once was. There are serious issues with forecasts for economic expansion, market returns that are falling behind rising costs and a very public removal of the ‘central bank put’. There isn’t a definitive, singularly important and scheduled event that can set the tone in the week ahead, but there is plenty for traders and investors to chew on. While the incoming feed of market motivators is important to watch, I am worried first and foremost about collective sentiment. For the S&P 500, we will enter the new week with a meaningful technical milestone that can provide a further lift if broken or exact pressure for a reversal. The midpoint of 2022’s range and the 200-day moving average happen to align at 4,470 on the index and 445 on the SPDR ETF. 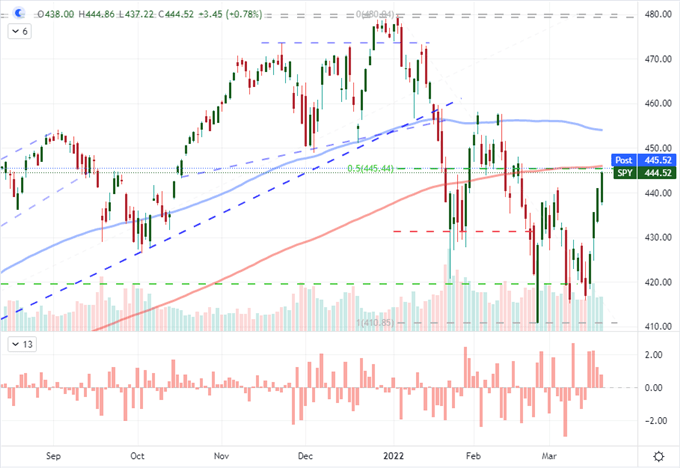 While my analysis is frequently tailored to the next 24 to 48 hours of trade, it worth considering a bigger picture as equity indices and other central assets determine their next phase. In the context of the first quarter of the year, we have seen a sizable bounce in a larger bearish shift – itself a move that is attempting to change tack on the post pandemic bull trend. Though the rebound has been relatively short lived thus far, it was nevertheless an impressive charge. In fact, in each of the four days through Friday, the S&P 500 managed to print a one percent or greater gain on each of the green candles. We haven’t seen such an impressive bullish consistence since early November 2020 after the US Presidential election (which saw a 7-day climb of that magnitude). Before that, we hadn’t see that kind of move since 1982; and there were only a handful of these instances going back to 1930. In short, last week offered an unmistakably bullish performance; but that does not guarantee a long-standing trend. 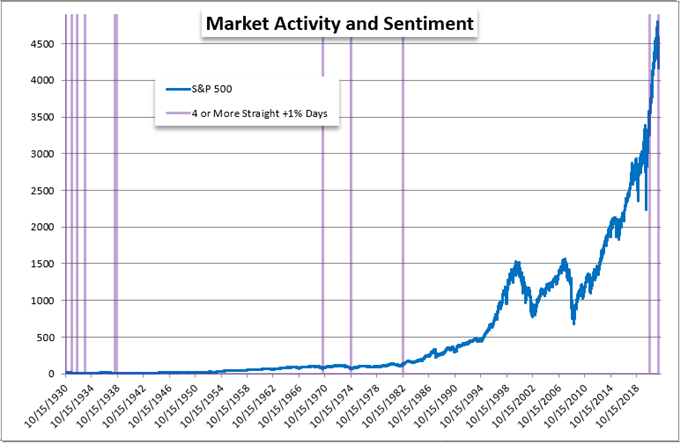 The Two Major Themes to Keep Tabs On

As we move into the new trading week, the top two themes that we have been tracking through March will remain my principal concerns for volatility – whether it express in bullish or bearish movement. The situation in Ukraine remains ultimately unpredictable given that Russia has yet to take efforts to broker a ceasefire seriously. Through this past week, the meeting between US President Biden and Chinese President Xi failed to produce a definitive commitment from the world’s second largest economy to back away from supporting the militaristic aggressor. I’ll keep a wary eye on the headlines to see if peace suddenly breaks out to support a relief rally or if the cumulative sanctions bites into global economic potential to the detriment of risk trends. Otherwise, monetary policy will be the more predictable matter. We are leaving behind a week of rate hikes – by the Fed, Bank of England, Brazilian Central Bank – but there has been noticeably little gain in local currencies or the implications of risk aversion. That is genuinely a surprise, but can we expect another lasting disconnect from central bank warnings as balance sheets legitimately shrink? I think it can last for ‘longer than I think rational’, but it will eventually anchor markets.

Chart of Relative Monetary Policy of the Major Central Banks 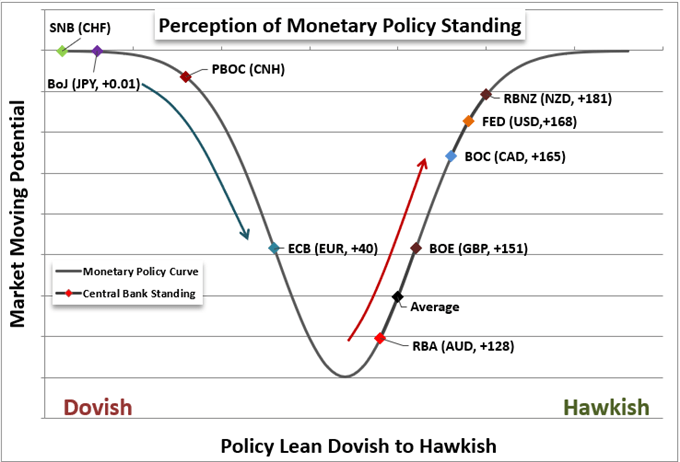 Speaking of monetary policy, the Federal Reserve’s turn at the podium this past week was the most aggressive take overall. While it wasn’t a 100 basis point move like its Brazilian counterpart, the US authority has vastly more influence over the global markets. A 25 basis point hike and an official forecast projecting a hike at each of the next six meetings this year (next is scheduled for May 4th) is very hawkish even in historical terms. Furthermore, the rhetoric around stimulus withdrawal is turning even the doves into raptors. On Friday this past week, one of the most dovish members of the Federal Reserve – Minneapolis Fed President Neel Kashkari – said he supported a much faster reduction of the balance sheet (called quantitative tightening). That will raise long-term rates with previous Fed Chairman Ben Bernanke equating every $150-200 billion in stimulus to a 25 basis point rate hike. The balance sheet has grown from approximately $1 trillion to nearly $9 trillion from 2008 to present. With this ahead, I find it remarkable that the Dollar hasn’t at least pushed a new multi-year high. Yet, with other central banks seen as turning more hawkish, it acts to water down the Greenback’s appeal…but for how long? 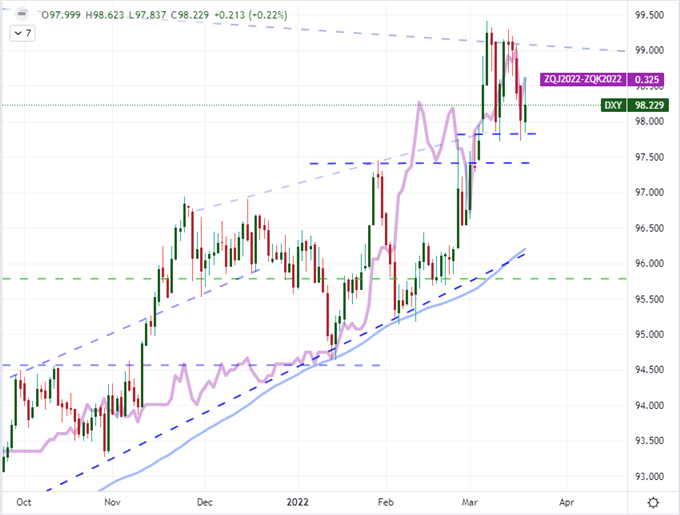 The Other Event Risk and Markets to Watch

Outside of the dominant fundamental and speculative tracks, there is plenty to watch over the coming week. While we may not have a FOMC rate decision, there is plenty on the monetary policy front that is worthy of analysis. For data points, you have updates like the UK inflation data on Wednesday. However, I am paying closer attention to the many central bank speeches scheduled throughout the week. The Fed has the greatest representation among speakers through the five day span with a virtual parade of speakers spanning both the hawkish to dovish ends of the scale. Fed Chair Powell will start it off on Wednesday with a speech at an NABE conference and will speak again later in the week. Heads of the ECB, BOE, SNB and RBA are all due to offer their views throughout the week. Speaking of the UK, I will also take in the Chancellor of the Exchequer’s spring address with updated growth forecasts from the OBR. Another data-led theme to watch will be the release of the March PMIs for the major developed world economies. These are key proxies for official GDP for a period (March) that has been exposed to tumult. 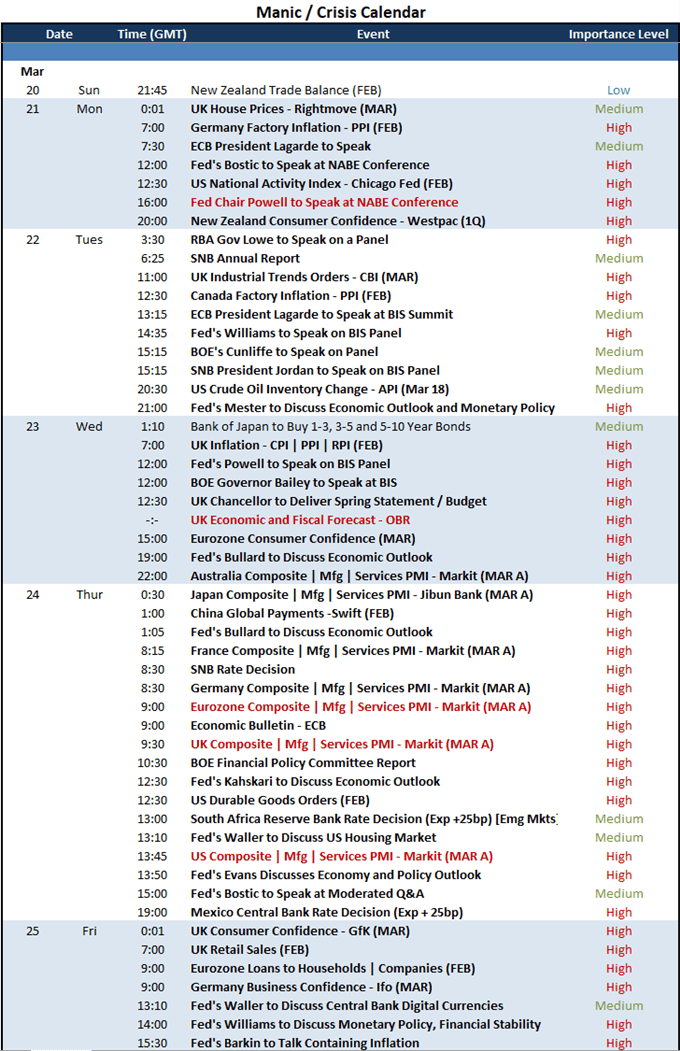 Among the many markets to watch over the coming week, I am most interested in the highly risk sensitive assets. The S&P 500 at the midpoint of its 2022 bear trend is just one of these key measures. The Yen crosses present another vary interesting mix. These pairs benefit risk appetite trends, growing interest rate differentials and high commodity prices. All three have been a factor in the charge we have seen through the past week, but we have seen raw material inflation slow and I am dubious of the continued charge in sentiment. Of these three influences, if risk aversion kicks in, it would likely override the market and pull markets down. That said, I have a lower risk tolerance and will look for confirmation in technical, fundamental and market conditions terms rather than try to pick tops. Among the crosses, I like GBPJPY, CADJPY, AUDJPY and others. However, USDJPY remains the most remarkable in technical terms and retail speculation has been particularly remarkable. Looking at client positioning at IG, 80 percent of those with an exposure to the major pair has a short on. This is a contrarian reading at extremes, but retail traders aren’t always wrong. 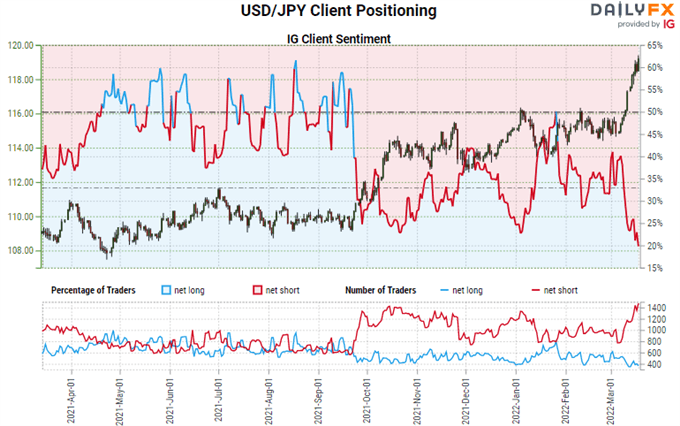