Dollar Reverses Despite High Inflation and FOMC Taper Talk, Where to Next?

Given Ever Reason to Slide, The S&P 500 and Risk Appetite Hold Firm

Typically, the combination of heightened volatility paired with decisive event risk that represents a threat to the structure underlying speculative appetite these past few years would be an effective trigger for the bears to run. And yet, when that typically explosive combination was offered up this past session, there was an unmistakable rebuke of the expected fear that would be expected to follow. Despite the heightened anticipation of an imminent Fed taper following the FOMC minutes and rates hikes after the US CPI data, the S&P 500 and its major counterparts finished the day little changed – recouping morning losses. Lest we presume this to be just a US equities consideration, we witnessed the same resilience in global indices, emerging market benchmarks (like the EEM ETF and USDMXN), most carry trade and even the high-yield fixed income measures. When I see markets absorb overtly bearish news and hold fast, it usually registers as an inherently bullish market for me. However, recent price action suggests the reticence cuts both ways; and resolution is more likely to follow a probability I have found over the years: panic is a stronger emotion than greed. 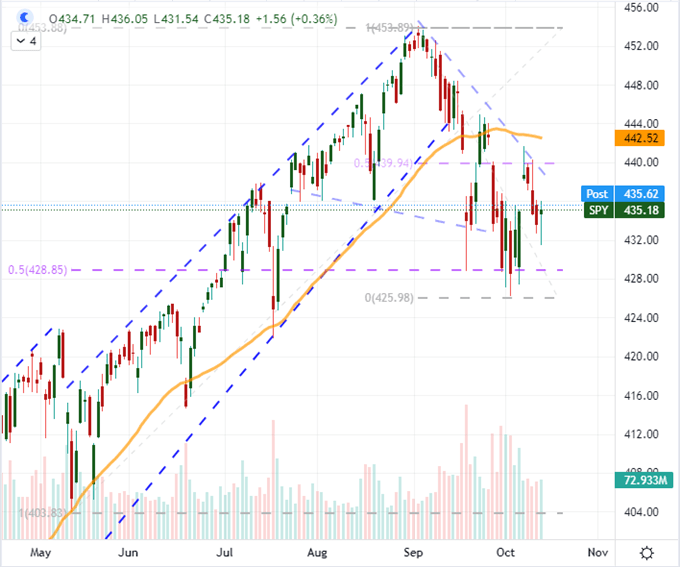 Establishing whether risk appetite is rising or falling in general is the most basic assessment of what is going to happen ‘today’, but gauging the indulgence of speculative appetite can help determine what the score is moving forward. Interestingly, the relative performance of the speculative-oriented Nasdaq 100 this past session outstripped its so-called ‘value’ counterpart in the Dow, lifting the ratio between the two. That keeps us firmly in the stratosphere of sheer speculative drive that only has comparison to the Dot-com boom/bust in historical terms. Notably, we have plateaued in this relationship as compared to the surge and collapse back in 1999/2000, but that time seems to align to the rise of monetary and fiscal stimulus – a structure that is supposedly destined to end. 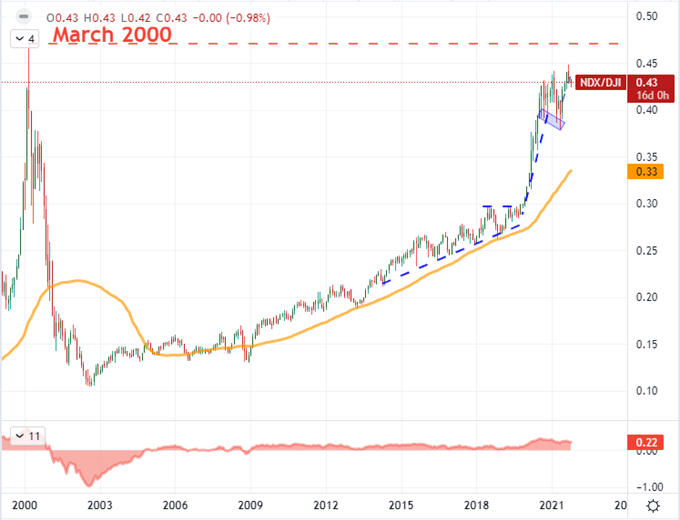 The Fundamental Trouble Is Growing

While markets seemed to put their fundamental blinders on and hold to comfortable ranges, the insights we have garnered these past few days should lead investors to be mindful of what the future holds. The IMF’s semi-annual updates registered as general concern – even though the global economy seems in a very comfortable position post-recovery. From Tuesday’s WEO (World Economic Forecast), the global growth forecast was downgraded 0.1 percent points from April’s update to 5.9 percent expansion in 2021. The US forecast received the biggest hit with a 1.0 percent point cut to 6.0 percent. As significant as this is, it is also fully expected given the course of data these past months and the recognition that the post-pandemic recovery pace would logically have to level out. More of a concern to me was the group’s assessment in its GFSR (Global Financial Stability Report) that a capital market and housing correction was likely on the horizon as stimulus was reigned in. That is not a warning that should be so easily dismissed. 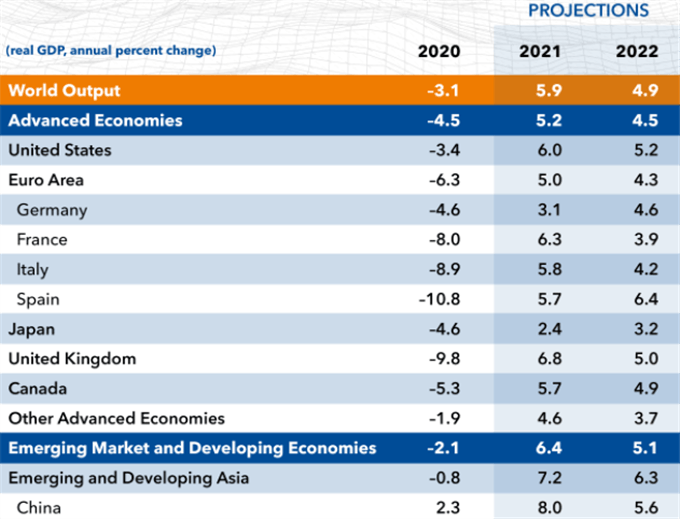 As far as monetary policy (the foundation for our speculative castles in the sky) is concerned, the evidence that the world is shifting towards away from limitless accommodation has gained significant ground in just this past session. The timeline of the Fed’s taper announcement has solidified after Wednesday’s CPI update. The September figures showed an uptick in headline inflation to a 5.4 percent pace and core to 4.0 percent. These are well above the central bank’s target, but more importantly, they are proving more persistent than was expected. That is something that the Federal Reserve acknowledged itself in the FOMC minutes from the last meeting. It seemed from that transcript of the summit that there is general acceptance of a taper call at the November 2nd-3rd meeting so long as the economy or market take a nose dive. However, the suggested $15 billion/month pace could be troublingly limited should the Fed need to hike to head off inflation as they wouldn’t be able to do so practically until September given the timetable of completing the taper by mid-2022 and the waiting period stated previously – both stated necessary precursors to lift off.

Chart of US Headline and Core Consumer Inflation (Monthly) 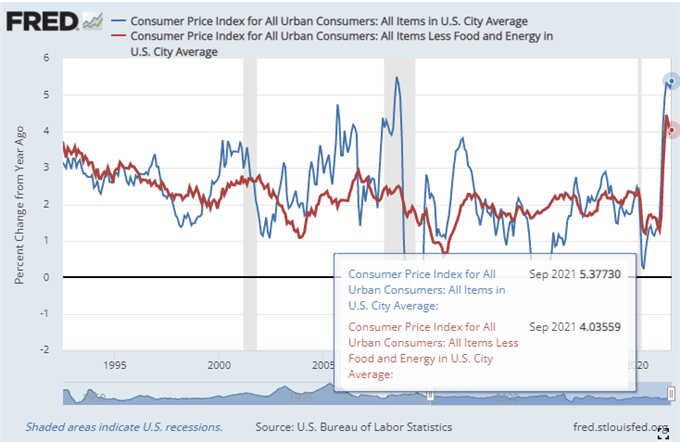 Chart from Fed Economic Database with Data from BLS

US Rate Speculation Rises and the Dollar Tumbles

It was unexpected that risk-leaning assets were not troubled by the event risk over the past 48 hours, but it is perhaps explained by the market’s general habit to default to a buy-the-dip mentality when faced with a systemic question about prevailing winds as well as the broader expectations in the markets leading into the updates. The Dollar’s retreat this past session in the face of a charged rate forecast, on the other hand, is still very surprising. The ICE’s DXY trade-weighted Dollar Index posted its biggest daily drop in five months this past session despite rate forecasts swelling on the combination of the CPI data and FOMC snippets. In fact, the forecast measured by Fed Fund futures jumped up to 37 basis points worth of tightening through next year with probability of a September first go hitting majority for the first time, but the Greenback would slide even against the Japanese Yen. While this may have some ‘buy the rumor, sell the news’ aspect to it, I would not consider it a foundation for continuous drive for a bearish reversal. That would require additional and external charge. 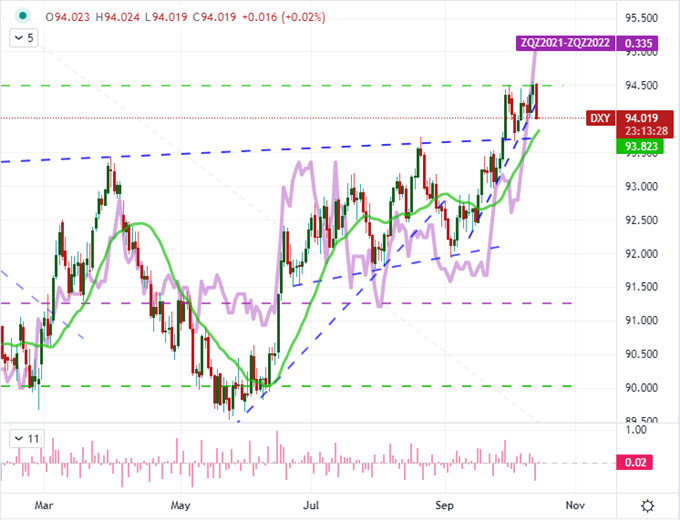 As we look ahead to Thursday’s trading session, it is worth while to follow the fundamental lines that dominated the first half of the week. I certainly don’t believe US monetary policy speculation has run its course and no longer carries any market-moving potential. For that reason, the upstream inflation statistics (PPI) due for release pre-New York open will still be on my watch list, but the various members scheduled to speak are open to greater possible variability. Another theme that will be on many investors’ radars will be the continuation of the earnings season. While there are a number of banks on tap (Bank of America, Morgan Stanley, Citigroup, Wells Fargo), my interest is in a different category. Alcoa and Taiwan Semiconductor Manufacturing Company carry more weight given their implications for inflation and supply chain constraints which currently plague the global economy. Speaking of supply chains, China is a hot topic that should not be overlooked simply because the news has thinned out from the troubled financial center. Reports of further missed payments by Evergrande are noticeably being delayed or are not going out altogether. Meanwhile, other key players in real estate in China are showing serious strain while manufacturers are struggling under government caps and resource struggles. Don’t lose sight of China’s influence. 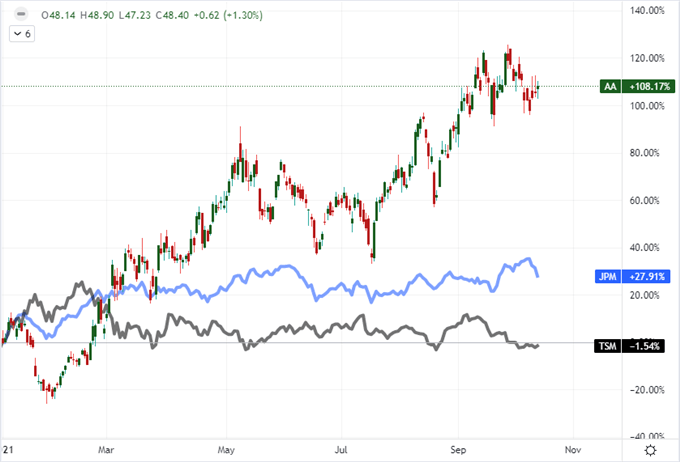