Sentiment this past session was difficult to draw a bead on. On the one hand, the event risk on tap painted a generally-positive picture through the US session between the IMF’s updated global growth forecast, the Conference Board’s US consumer confidence update and after-hours tech stock earnings. Nonetheless, the benchmarks for risk I tend to follow were broadly lower, including the US indices – and even afterhours in the wake of the better figures from Apple, Google and Microsoft. This is likely at least partially reflective of the anticipation and uncertainty heading into the Federal Open Market Committee (FOMC) rate decision due tomorrow at afternoon in Washington. The central bank will likely be exceptionally delicate with its guidance and verbiage, but this market is on tenterhooks. Though not isolated to the US equities market, the major indices I track most closely were in the red but were exhibiting more volatility than anything else. The Nasdaq 100 suffered the biggest slip. After a five-day climb to fresh record highs, the index dropped as much as 2 percent before finishing down 1.1 percent on heavy volume. The intraday reversal generated the biggest ‘lower wick’ since early March – a period when the market was attempting to establish a bottom on a slide. 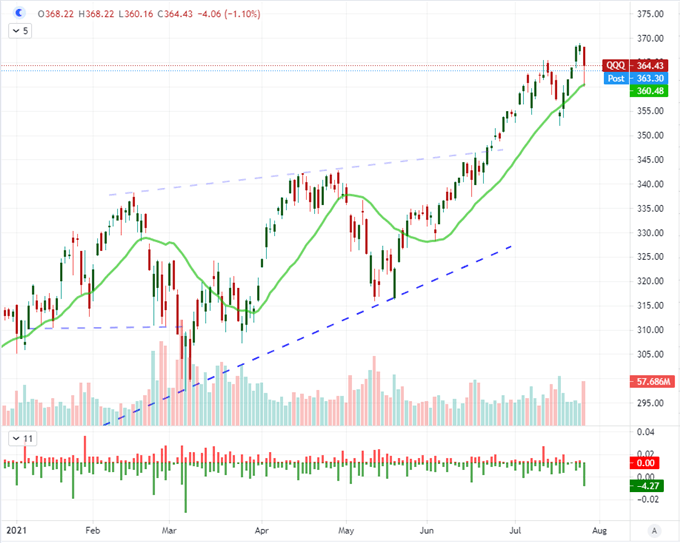 While the slip in risk assets may seem unusual given the fundamental mix this past session, it shouldn’t have been exactly surprising given the form of other speculative assets. The German DAX and UK’s FTSE 100 were both underwater before the recovery during the US session and the Japanese Nikkei 225 ended Tuesday sharply in the red. Other asset benchmarks were under greater pressure like carry trade (eg AUDJPY), junk bonds and particularly emerging markets (ie EEM). Looking further into Wednesday’s, the first opportunity to rouse a bullish retort has been undercut by the after hours trade. All of the major tickers I was watching as key earnings updates beat expectations. That said, the response from investors was split. Google ($27.26 EPS vs $19.35 expected) and AMD ($0.63 vs $0.54) advanced after print while Apple ($1.30 vs $1.01) and Microsoft ($2.17 vs $1.90) dropped. When what should be objective improvements fail to rouse the enthusiasts, something is amiss. 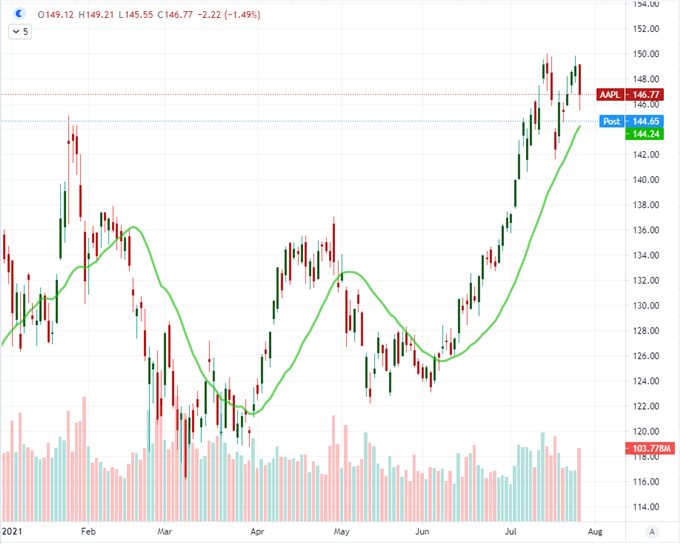 Another fundamental influence that wasn’t paid its full due this past session was the update on economic activity. While data like durable goods orders in the US for June (0.8% versus 2.1% expected) and Chinese industrial profits growth for the same month (66.9% vs 83.4%) matter, the more comprehensive update on this front was from the IMF’s World Economic Outlook (WEO). The global forecast for 2021 was untouched at 6.0 percent but the outlook for 2022 was increased 0.5 percentage points to 4.9 percent. This could be a force for optimism for the explicit concerns around the split in the developed and developing world’s vaccination rates – 40 percent and 11 percent respectively. Further, the concern around inflation proving a persistent threat and even a scenario whereby fiscal stimulus from the US government expediting a Fed rate hike attempts to spin a typical bullish point into a cautious concern. 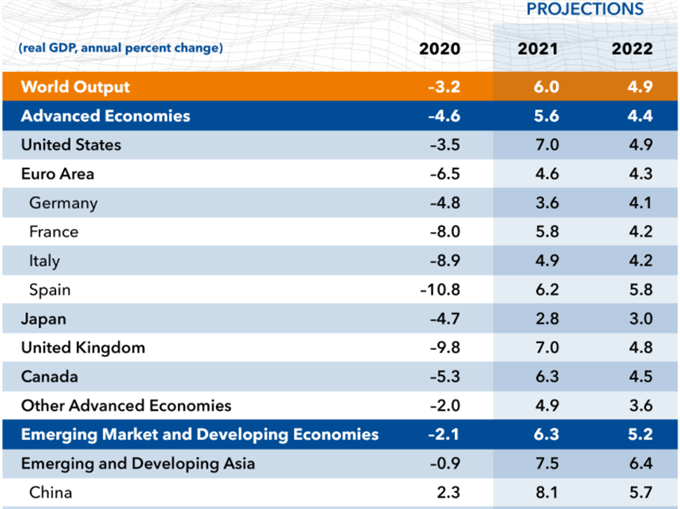 Speaking of the delicate balance of moderating extreme monetary policy that leaves little room to fight future crises and arguably feeds asset bubbles without triggering a speculative cascade that backflows into the economy, we have the Fed on tap ahead. There is little-to-no expectation that the Fed would abandon its message of transparency and slow transition to hike rates at this meeting, but there is a very clear discussion around the timing of the taper – the move to precede the eventual hike. Policy officials have been discussing this matter, but they have offered no official stance given the last rate decision and meeting minutes. There is little benefit of signaling intent to start the process of winddown now, but it could be a strategy to make a meaningful move that can be addressed fairly soon at the Jackson Hole Symposium, approximately a month away. The details matter here for risk trends and its myriad of assets as well as the US Dollar. 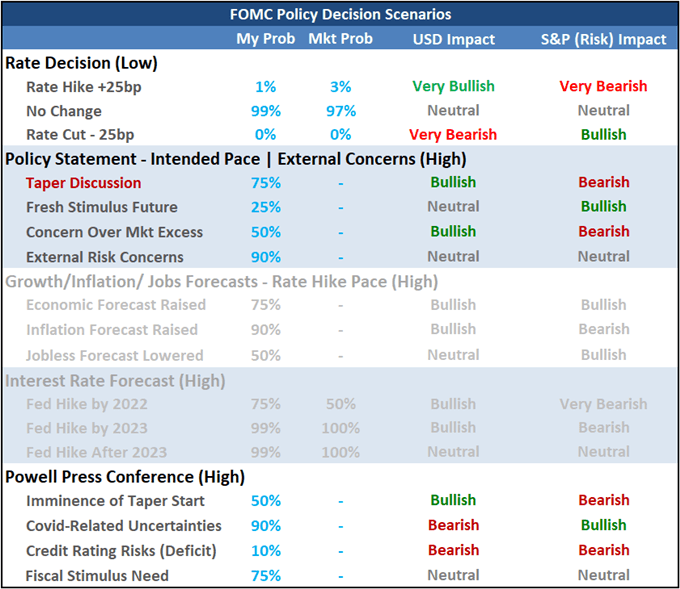 The Pairs I’m Monitoring Most Closely

While I will of course watch risk benchmarks like a hawk (pun intended) through the coming session, I believe the Greenback’s response would potentially be more productive if we manage to generate anything more than a quick spark of volatility. With the false breaks and slow drift of the subsequent retreat on the likes of GBPUSD and USDJPY, these pairs neither represent good range options much less full trend setups. EURUSD on the other hand never fell into that hole of a technical break that was poorly timed with fundamental backing and systemic backdrop. This pair was slowly rounding off its large wedge support and has tentatively broken the past two months’ range resistance, but not officially cleared the 20-day moving average – extending the longest period below the short-term measure since November 2018. The next move with an anti-Dollar push by either pressure or neglect would be a move back into range. Paths of least resistance already have a leg up waiting for confirmation.

Chart of the EURUSD with 20 and Consecutive Candles (Daily) 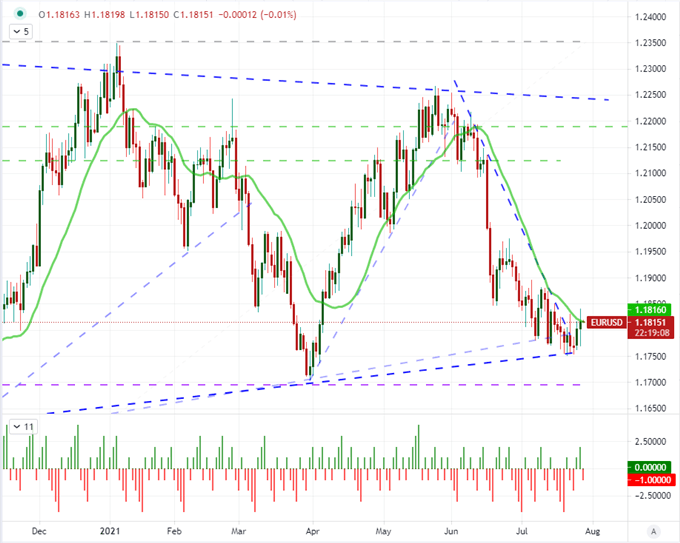 The other pair that I continue to watch very closely is USDCAD. The monetary policy contrast here is far greater as we have seen the Bank of Canada (BOC) taper twice these past few months while the Fed drags its feet. That said, this pair has progressed higher. The break above 1.2600 has yet to stick, but the pullback has stalled above the 20-day moving average. The past four-day range has pushed us yet again into a position of markets exhibiting excessive quiet which raises the breakout risk. That is a convenient position ahead of such a high profile event. And this is a pair that has potential on a break of either direction.

Chart of USDCAD with 20 and 4-Day Historical Range (Daily) 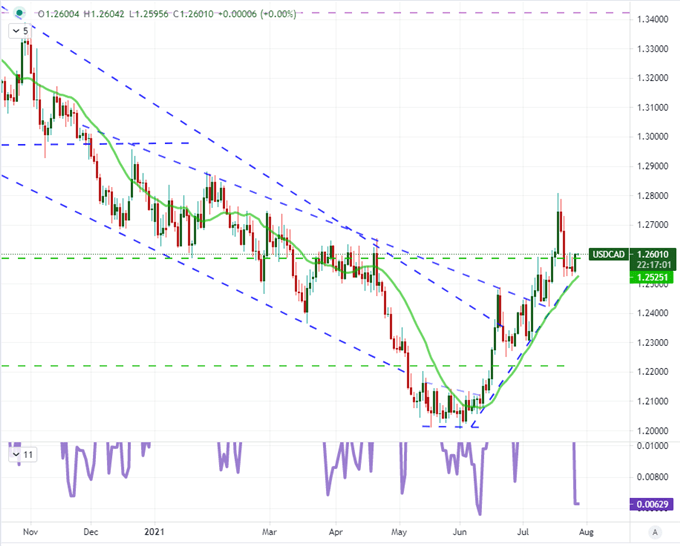