An Unexpected Fire In US Equities

If we were going by the economic calendar, it was looking like we were heading into the full lull of the summer doldrums. What we have seen thus far could not be further from those expectations. A strong downdraft in some of the most closely watched risk assets proved not simply an isolated bout of volatility. The risk aversion proved broad for both region and asset type which goes a long way to raising the threat that this was not simply a short-lived shudder from a thinned market. All traders should be on high alert, but there is strong precedence recently to maintain a sense of skepticism given a host of false starts across the financial system over these past months. It is difficult to override an undercurrent of illiquidity and upend a deep complacency born out of borrowed time and massive stimulus programs. As such, I’m eying the S&P 500’s first break of trendline support stretching back to the post-pandemic recovery and the Dow’s biggest daily drop since October for evidence that momentum is shifting to full panic-led deleveraging. 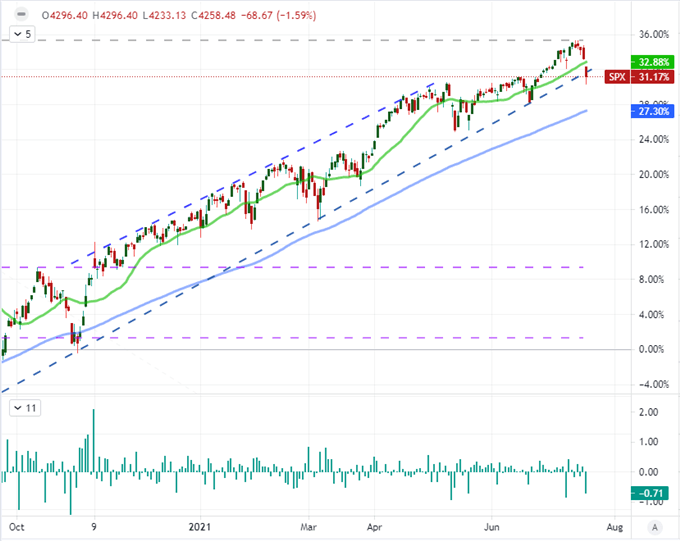 One of the more reliable measures for carrying forward a systemic sentiment shift is to establish a fundamental root to the move. Event risk in the opening 48 hour of this week (Monday behind us and Tuesday ahead) is particularly light and doesn’t get close to hitting the nerve of the more effective themes that have driven the market lately. A growing reference in headlines and in trader circles is the reference to the rising numbers of coronavirus cases in countries like the US that are reopening as the Delta variant spreads. Alternatively, the slowing in growth trends seen in recent data points (and perhaps with Friday’s PMIs) could give weight to the breakdown in crude oil and the US 10-year Treasury yield. Or, perhaps the recognition of a global shift in monetary policy towards normalizing from an extremely easy path is finally catching up to speculators after weeks of building evidence? It is all possible, but I believe this is more of a risk-first move with explanation coming later. This could prove the most capable universal motivation for markets, but it could also snuff out a nascent trend should liquidity dry up quickly. 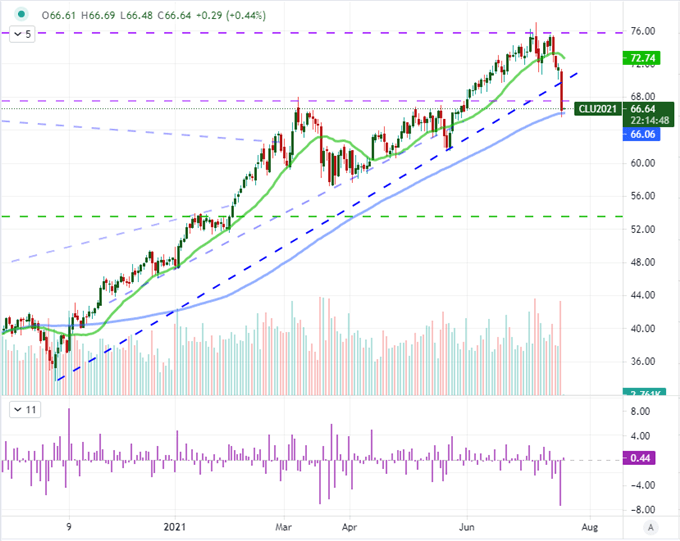 The Breadth and Depth of Risk Aversion

There is perhaps no more fundamental motivation for the markets-at-large than the appetite to add to risk or need to unwind risk. The further we move to the extremes in the scale of greed to panic, the greater the override for market participants distracted by alternative fundamental matters. So, while I liberally use shortcuts to gauge sentiment when short on time – such as the course settings for the S&P 500, my sanity check before I am drawn in by a large move is to evaluate the correlation across major speculative assets along with the intensity of their collective move. Below offers a visual of the coordination in risk unwind along with the productivity of the downdraft. Even without distinct technical levels applied, it is not difficult to see the tentative breaks. This certainly has my attention going into Tuesday, but it doesn’t have my conviction that we have dove into a self-sustaining trend. 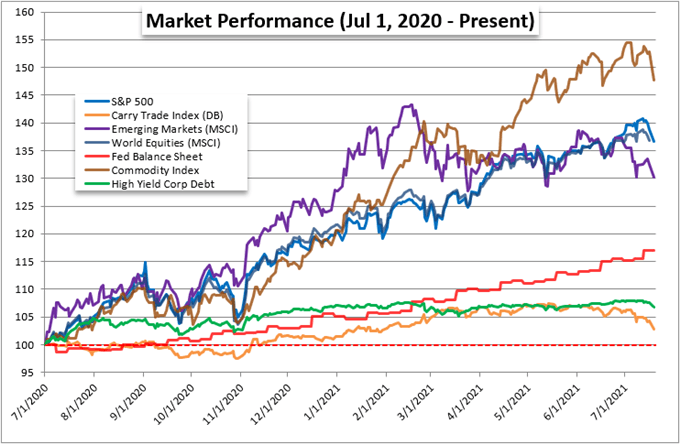 Visualized another way, the below intensity curve helps me better assess the standings of conviction. When risk trends take command of investors the world over, it can be difficult the momentum that results. However, getting that traction in the first place can prove quite the feat. While there was some moderate risk aversion to end this past week, the truly comprehensive move didn’t register until Monday. After correlation and intensity, follow through is the most important feature of a productive trend. At what point does one call a trend? That’s up for discretion, but at a minimum I would look for a second day’s follow through. 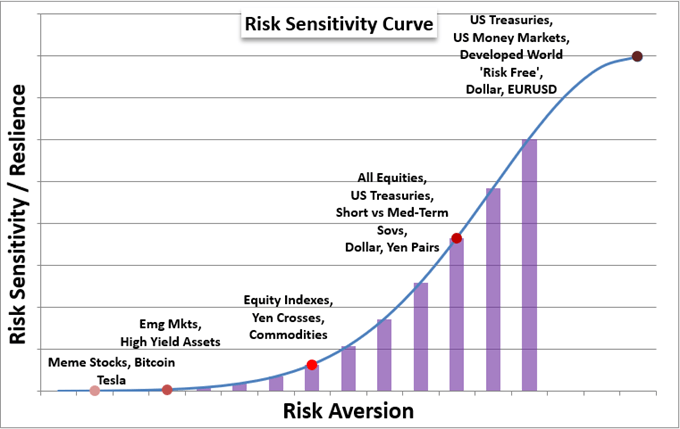 While much of the interest through the opening session of the week may have gone to indices and other overt risk measures, I was also keeping an eye on assets that orient more towards the haven side. In particular, the FX market’s Dollar and Yen crosses were of particular interest. For the Yen pairs, there was a broad enough slide (the Japanese currency rising) that it would also pull down USDJPY. That is a combination of two generic havens, but the Greenback usually appeals in more extreme scenarios. If we were to look at the Dollar by itself, the DXY trade-weighted index struggled to push higher. That said, it is heavily weighted towards EURUSD, a pair that is rooted more in its liquidity rather than its ‘risk’ contrast. If there is a second day of risk aversion, however, the smallest 10-day range in 18 months is likely to provide a critical break. 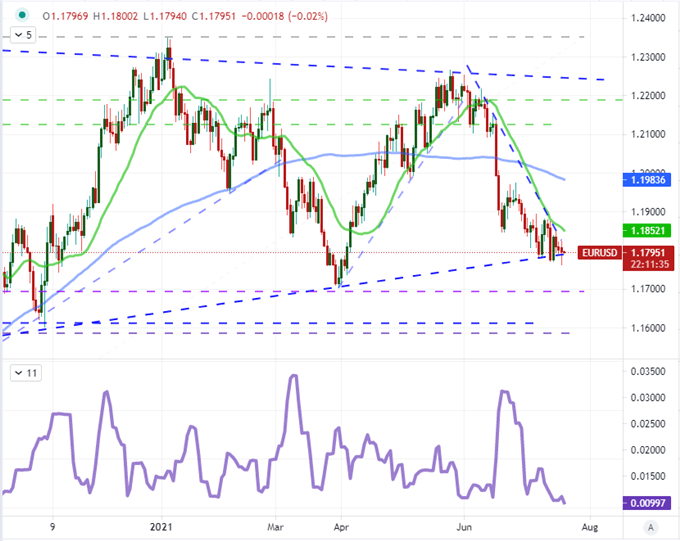 Elsewhere, managed to produce some impressive bullish breakouts against key counterparts. GBPUSD isn’t particularly known for its contrast on the risk spectrum, but it seemed tuned to the day’s volatility. A break of 1.3700 has brought the pair to a six month low by way of a prominent trendline support breakdown and subsequent clearance of the 200-day moving average – the first slip below this measure in 257 trading days. 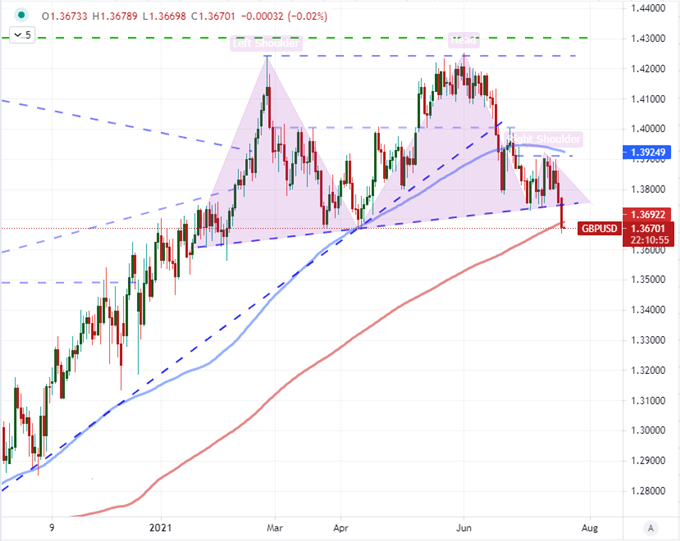 Another incredibly impressive break in the Dollar’s favor came from USDCAD. Already measuring out progress – like the AUDUSD’s head-and-shoulders break a month ago – the ‘Loonie’ cross similarly cleared its own 200-day moving average over a similar time frame as well as the historical midpoint for the pair at 1.2600. For scale this is perhaps the most impressive clearance. Yet, for it to truly matter, there needs to be follow through. A break alone, even one as steeped in technical renown as this, is no guarantee of trend. 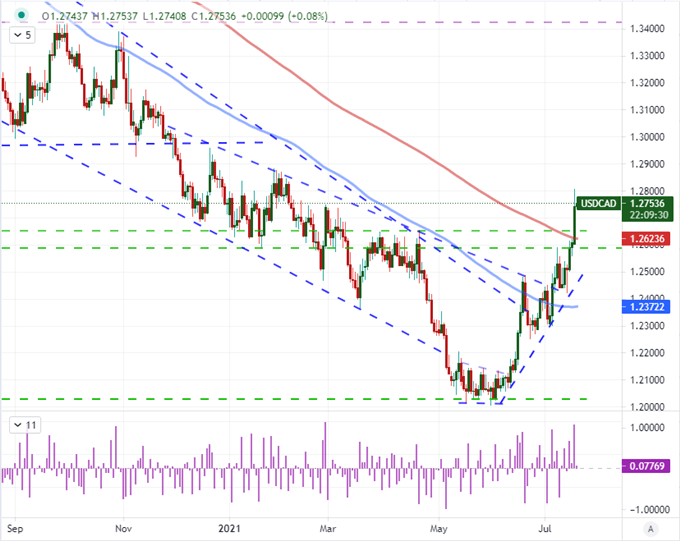