Risk Appetite Charged by a ‘Disappointment’ in June Employment?

This past week ended with a very distinct extension of the rally in US equities and overdue pullback in the DXY Dollar Index. The move was helped along by scheduled event risk – the June NFPs – but market conditions were likely a bigger influence in the unorthodox volatility. In the twilight hours of active trade before an extended holiday weekend, the S&P 500 advanced 0.8 percent on Friday – the biggest single-day rally in two weeks. Far more remarkable was the technical feat of a 7th consecutive trading day’s advance. We haven’t seen a run of this duration since August. Further, there haven’t been long bull runs since April 2019. This adds to the perspective that these markets are stretched in the short-term – which only adds to the longer-term exaggeration. The June employment data that closed out this past week likely helped this move along by suppressing expectations of an imminent taper and rate hike announcement, but the general complacency across the financial system likely did more to indulge the zombie-like advance. 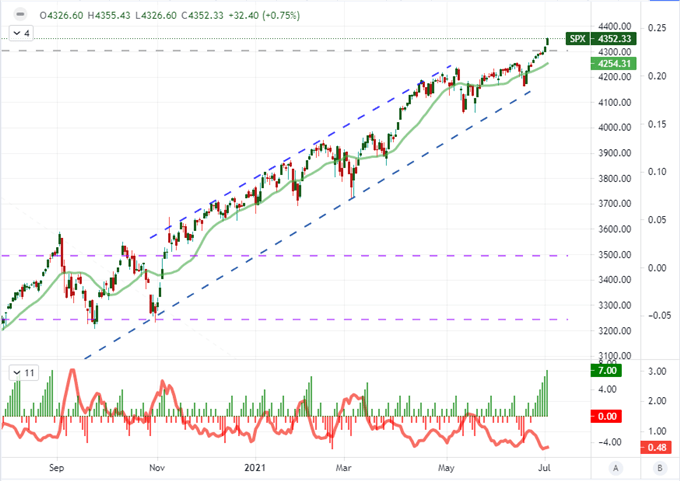 As for the past month’s employment statistics, the data crossed the wires Friday with a noticeably better-than-expected print. The 850,000 jobs added to the economy was an impressive 150,000 more than expected. In context of the severity of surprises since the pandemic, this is not exactly an extreme reading. Nevertheless, it does register as a stronger backdrop for the world’s largest economy, and could thereby be read into as a further charge for the Fed to act in order to head off an overheated economy. Yet, the additional stats from the employment report seemed to subdue the optimism and in turn cull expectations of an imminent hike in monetary policy tone from the US central bank. The unemployment rate unexpectedly ticked higher to 5.9 percent while average hourly earnings growth slowed in the month of June to a 0.3 percent expansion. That doesn’t exactly make the case for the central bank to maintain its extreme accommodation through the indefinite future, but it does ease pressure for a move ‘as soon as possible’.

Chart of NFPs Estimates and Actuals with Difference ‘Surprise’ (Monthly) 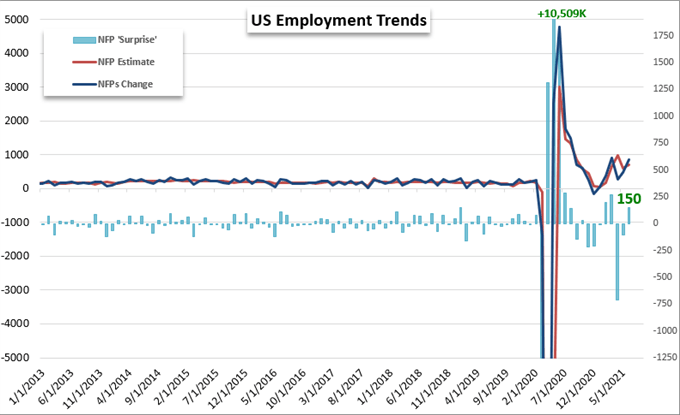 The Top Systemic Influences for the Week Ahead: Fed Rate Speculation and Seasonality

When evaluating the risk performance to end this past week through the filter of US interest rate forecasts, we can draw a more comprehensible view of the Dollar’s retreat to end this past week. The DXY Dollar Index dropped Friday to break an impressive 7-day rally – the longest charge since February 2019. An NFP beat would seem to support the Greenback, but a slip in rate speculation would hurt the benchmark. From Fed Funds futures, we can register distinctly the pullback in interest rate anticipation from the US central bank. Through week’s end the forecast out to December 2022 was pricing in 20/21 basis points worth of rate hikes (80-85% chance of a standard hike) when just a day before the tally was up to 24/25 basis points (certainty of a hike). This theme has proven an effective driver even in quiet market conditions. It is worth keeping close tabs on its development through the coming week for broad fundamental guidance. 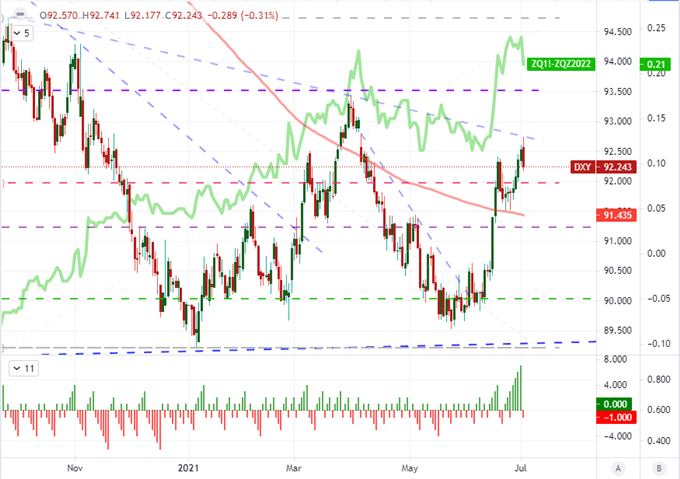 While rate speculation is an effective fundamental driver and technicals are generating considerable interest among market participants, market conditions remain my top consideration for how markets are likely to move in the week ahead and throughout July. In the week ahead specifically, the docket is noticeably lighter than the what we have seen over previous weeks and the US exchanges will be offline Monday in observation of the Independence holiday. That is likely to distort the ranks’ ability to generate systemic trends. Historically speaking, this month is known to experience a further easing in volume while volatility remains traditionally low. However, I am taking pains to remain purposefully alert to any underlying changes in conviction. There is a lot of corollary to be drawn between our current course and the extreme quiet of 2017. Yet, realized inactivity doesn’t account for the strain behind the markets as the markets teeter on extreme levels of notional and thematic leverage on the hopes that this support structure remains in place for the indefinite future.

Chart of Monthly Seasonal Performance of S&P 500, Volume and VIX 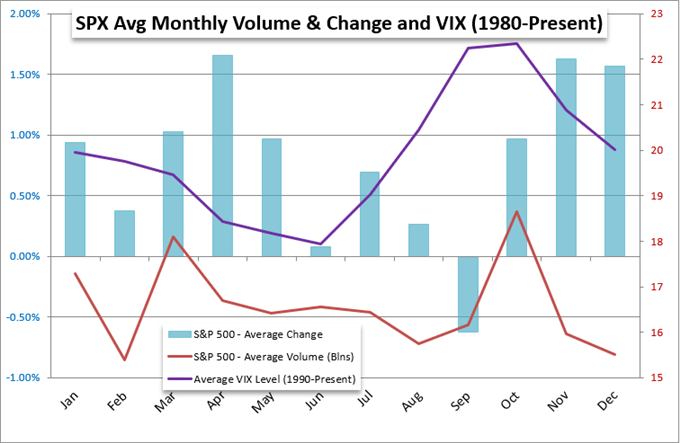 Overall, my expectations for activity for the markets into the coming week – until definitively set on a different course – are an extension of the moderate conviction in a tepid bullish bearing. That helps me to sort out what fundamental events and technical developments I consider to carry tangible weight. On the economic docket, there are few scheduled events that seem like they can strike a serious nerve like US interest rate expectations. Instead, high profile events look as if they will have more success generating short-term volatility. Notably, the ISM US service sector activity report and RBA rate decision seem capable of stirring some response from their respective markets – and in the first half of the week which is noteworthy. This combo aligns nicely to AUDUSD which made a technical move this past week which looks like a progression on a much larger reversal off the 2021 head-and-shoulders pattern. The chart suggests we could be on the cusp of a big and long-term turn with event risk backing the move, but market conditions reset my expectations that volatility without commitment is the more likely path. 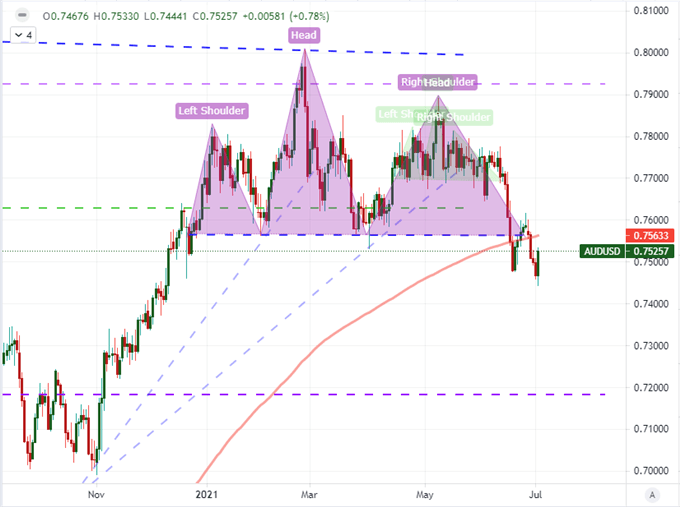 If a systemic trend is an improbable event, it is probably a better approach to find those markets that are more aligned to range-based scenarios. EURUSD may be one of the best staged liquid assets for exactly that picture. The pair put in for an impressive 450 pip tumble over the past month and yet it stayed uncontrovertibly within its broader range. The bottom of this technical pattern is in the 1.1775/1800 vicinity which we are pulling up from after Friday’s intraday low. Traversing this pattern looks far more manageable given the circumstances than trying to fight the prevailing currents.

Chart of the EURUSD with 100-Day Moving Average (Daily) 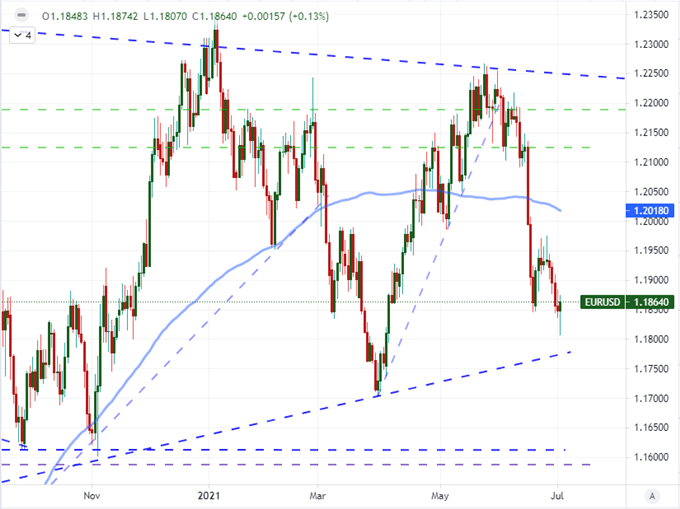