When the Tail Wags the Dog

The start to this new trading week presented an extraordinary measure of volatility for capital benchmarks like the S&P 500. While the guide to speculative appetite managed to close out the first session with a fresh record high, it didn’t come without a remarkable intraday reversal. In fact, the session began with a modest gap higher to bridge the weekend to shortly tumble into an acute slump. In a nearly 1.6 percent tumble registered in less than 45 minutes, it would seem that fear has seized the broader market. And yet, from this abrupt implosion, the market would work its way slowly but steadily towards recovery to close out a large ‘lower wick’ on the daily candle that spoke to exceptional volatility matched by serious speculative indecision. Though this was the picture for arguably the most heavily traded US index, it wasn’t exactly the depiction of intent across all regions and asset classes. It seemed that anticipation for systemic matters due later in the week allowed for a liquidity gap in the interim that led otherwise limited markets for systemic influence to exert an impact that stretched far wider than many of us would have expected. 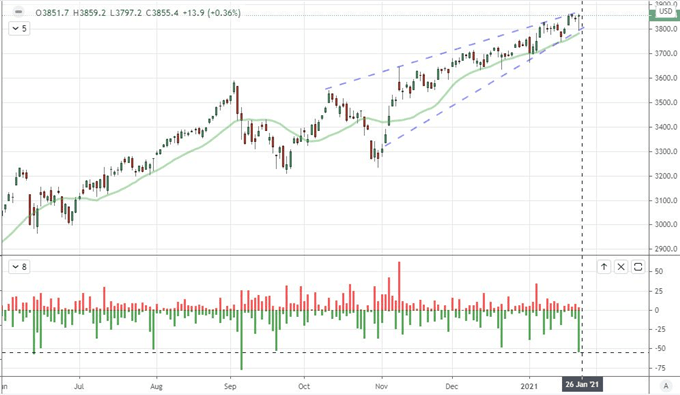 Liquidity plays a critical role in market movement. Sometimes, when market depth is thin either through a broad fundamental balance or in advance of high-profile thematic releases, the it is possible for concentrated speculative efforts to wrest control of deeper currency through otherwise more constrained means. There is major event risk due this week starting with the upcoming session’s run of GDP-related updates, but Monday’s session would leave us between the weight of record highs and questions of fundamental appropriateness in this position. Therefore, some of the most popular trades among coordinated groups like those in social media and Reddit boards seemed to lead broader markets to heavy swings (read more on the rise in retail trading and what it may signal). While the S&P 500 posted a larger ‘lower wick’ indicating an intraday reversal from lows, the Nasdaq 100 once again outperformed with a record high relative to its broader counterpart. This alongside a notable lack of consistency in ‘risk on’ for global markets and alternative asset classes suggests we weren’t witnessing full blown conviction. 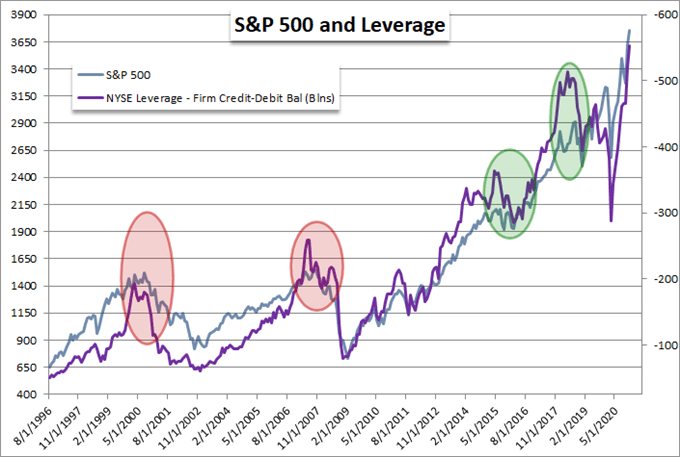 Similar to what we have witnessed from Tesla shares and Bitcoin over previous weeks and months, it seems that we are witnessing a concentration of speculative appetite for particular assets driven by the convictions of a more concerted group within the broader market range. Through this past session, electronics retail company GameStop was once again the standout for the day. At one point, GME was up nearly 150 percent on the day on over 175 million shares in volume. That was double the SPY S&P 500 ETF volume for the same session. While there is a fundamental argument in support of the company’s gains made by those bulls with conviction, the full heft seems to be driven by community in areas like Reddit and Twitter in a bid to upend the most heavily shorted stock in the US markets. When there isn’t a systemic theme dragging the markets along one way or the other, battles among markets segments like these can very well arise. 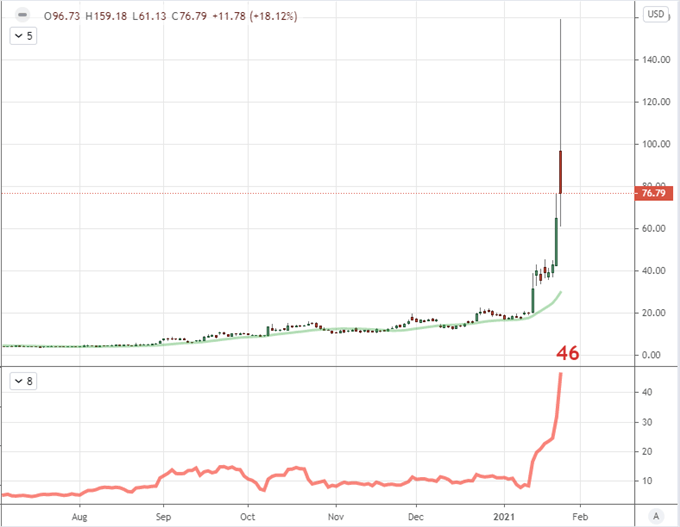 Retail traders are exerting an enormous influence over recent market activity – and more than just extending the already prevailing bull trends behind the major US indices. In the absence of active engagement by the deeper pocketed groups that anchor intentions to growth, rates of return or more prosaic matters; we find favorites among the smaller participants seem to garner greater traction. In addition to Gamestop, there were stories of inexplicable (according to the company) activity for Blackberry or AMC movie theaters. This seems perhaps a natural shift in focus from Tesla and Bitcoin which had led the way in previous weeks. With this lead, it perhaps becomes more explicit that risks are elevated which raises the threat of correction. From my poll to end last week, more than half of those that participated said they believe the next bear trend (20 percent correction from highs) from the market would happen within the next six months. 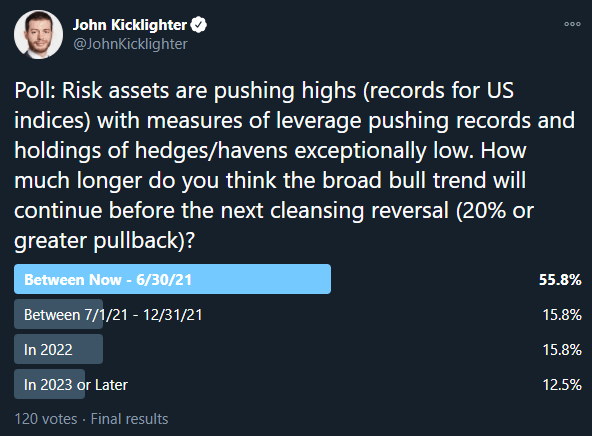 The interest and activity from traders is perhaps not particularly remarkable given incredible consistency of bull markets these past years – going so far as to quickly recover from the pandemic-led fastest market slump on modern market record. Despite the job losses an unexpected economic outlook, trading activity continued to rise this past year. In fact, looking at Google search trends, interest in “day trading” in the United States hit a record high late last year and is once again in an aggressive upswing.

Google Trend Search Interest for ‘Day Trading’ in the US 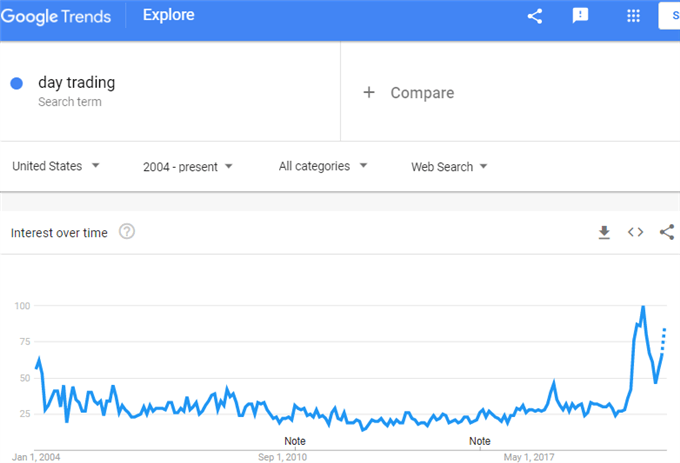 Yet, the enthusiasm doesn’t simply mean that market participants are taking the rally on faith alone. In fact, alongside the search for “day trading”, there has been a parallel charge in concern (search volume) for “market bubble”. As much recognition as there may be for the distortion in speculative appetites, that doesn’t mean the bubble has to pop. As the saying goes: ‘markets can remain irrational longer than you can remain solvent’. 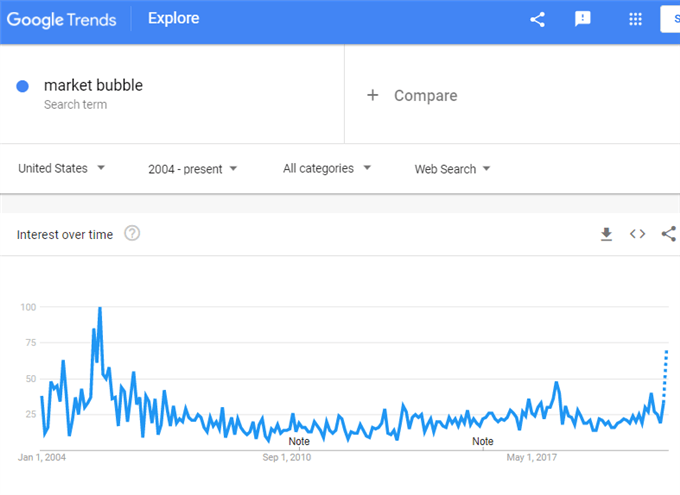 Moving forward, the steep market swings borne from appetite and opportunity will be confronted with stodgy but influential competition. Most notably, we are heading into scheduled economic event risk that speaks to the general health of the global economy. Most notable on my list Tuesday is the IMF’s World Economic Outlook (WEO) report which can foster or thwart the optimism among global investors. Given the efforts by governments and central banks – most recently the US – recently, it may very well be that these projections continue to improve which could keep the activist community traders in play through Tuesday’s session – at least until the next run comes in Wednesday’s combination of the FOMC decision, Global Financial Stability Report and Tesla earnings. Alternatively, if the outlook takes a turn for the worst, it may very well pit a waver in large investing interests against the socially-led traders. 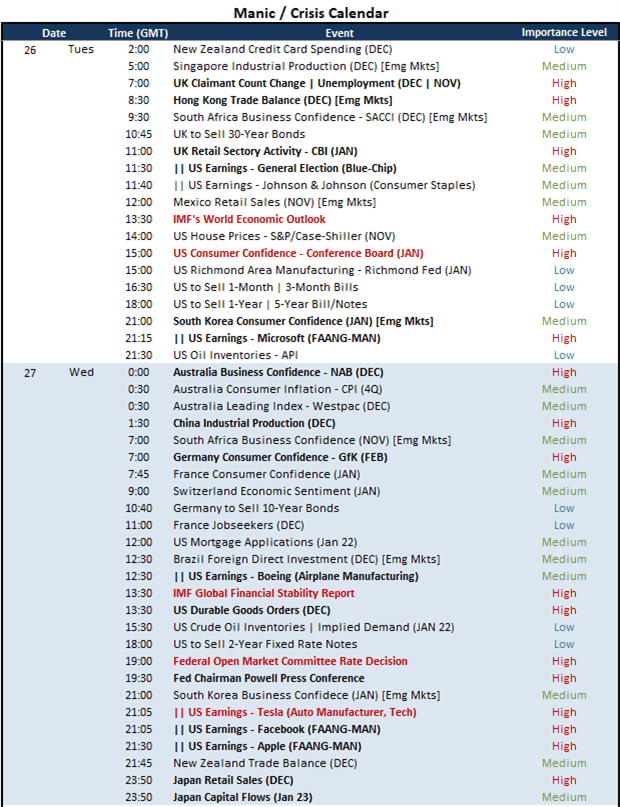 While the likes of Gamestop and Tesla may continue to exert pressure from bottom up, I will not lose sight of the systemic fundamentals that continue to wash over the markets. Perhaps a less distracted channel for the big picture matters is the US Dollar. With the Senate approving Janet Yellen to the Treasury Secretary role Monday, the picture of stimulus in the United States has solidified significantly. The question now is whether more eternal infusions of capital is bullish owing to the levers for near-term growth or bearish as was the equation historically due to the boost in inflation expectations to water down the local currency. Looking to EURUSD, it doesn’t see the market is settled on how it will read the situation. 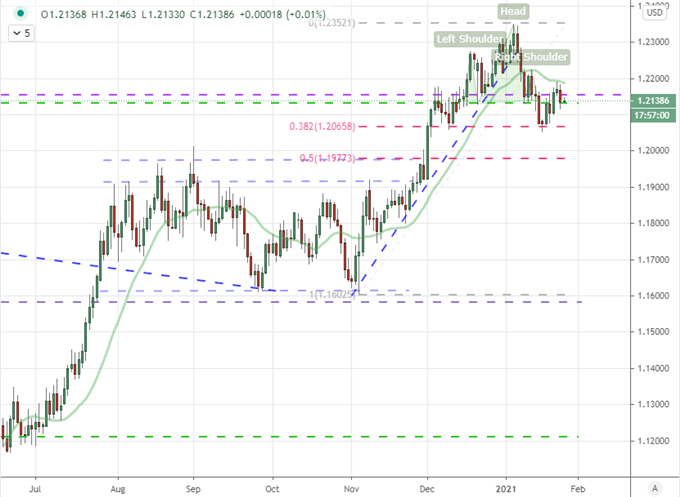