Risk Appetite Struggles Until Bulls Take Over In Twilight US Hours

The week has opened to an uneven start. Though momentum was firmly at bulls’ backs before the weekend with the additional push from the surprise 2.5 million net jobs addition to the US payrolls, confidence was notably lacking for traction Monday morning. From indices to emerging market assets to carry, there was a material break in the momentum from Friday. With economic updates warning of deeper recession and a growing dependency on monetary policy with the Fed dead ahead, speculative conviction would reasonably slip traction after the weekend. Yet, by the US afternoon, that enthusiasm would return – and not just for the S&P 500 and Nasdaq 100 (the latter of which pushed a fresh record high). There was an unmistakable risk appetite across the board through Monday’s latter hours which will set expectations high for Tuesday. 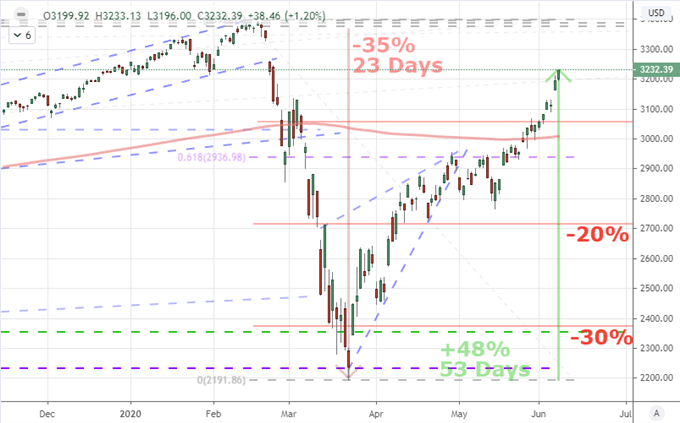 I like to look at speculative appetite – bullish or bearish – through a measure breadth. Through the closing hours of Monday and opening drive Tuesday, there was an unmistakable charge in sentiment. Through the Asian and European sessions Monday, risk aversion stretched through indices, emerging markets, carry and more. The retreat was tepid with a moderate gap lower on the open for the likes of the S&P 500, but there was limited follow through. Yet, by the time the US session took over after the German DAX and UK FTSE 100 closed, a measurable optimism had set in. We can see the shift in tone from Asian to European to US benchmark. And yet, conviction still leaves much to be desired. Not all assets were struck with the overwhelming sense of enthusiasm. Yen-based carry pairs for example took a dive Monday with USDJPY and CADJPY threatening to retake their 200-day moving averages. 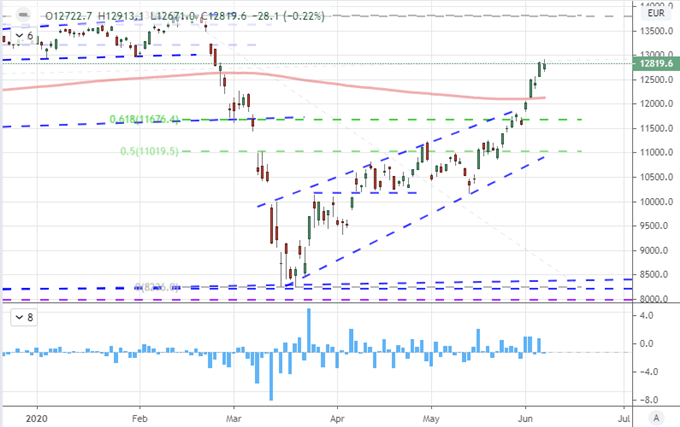 To keep risk trends moving, a focal point of conviction is the best possible motivator. The deteriorating relationship between the US and China is one such outlet. That said, the USDCNH continued it slide lower through Monday, following a scenario whereby the Yuan tended to gain when relations between the two economic powerhouses improved. With the Chinese May trade report posting a record surplus in Dollar terms – enough to rouse Trump administration accusations – while component figures dove (like a -16.7% drop imports) it was the worst of both worlds. 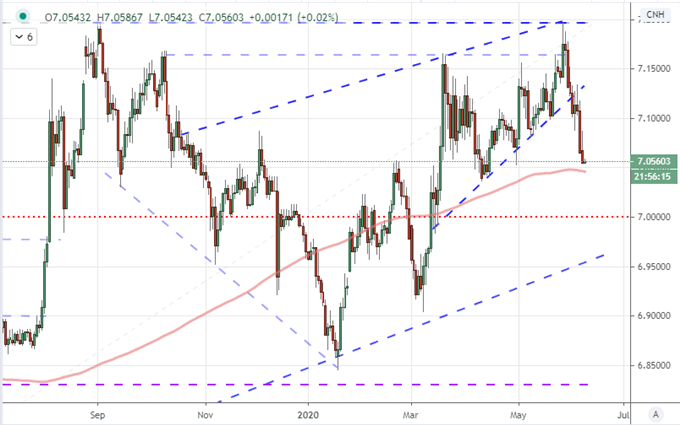 The outlook for the economic recovery is another outlet to keep track on. This past session, the World Bank updated its Global Economic Prospects to project a painful -5.2 percent contraction – the worst contraction since World War II. The NBER would also announce that the US economy (the world’s largest) tipped into official recession beginning in February. This is a painful assessment, but one that the market has discounted. But, how much of the future is already accounted for? Whether investors and citizens appreciate it or not, they are operating on the assumption that the pandemic is behind us and economic recovery can continue unencumbered. That said, in a poll I ran on Twitter, two-thirds of respondents believe a second wave of the virus spread is ahead. To ward off that material economic impact, either we need a vaccine or governments will refuse to shutdown for a second time. Neither is particularly reasonable. 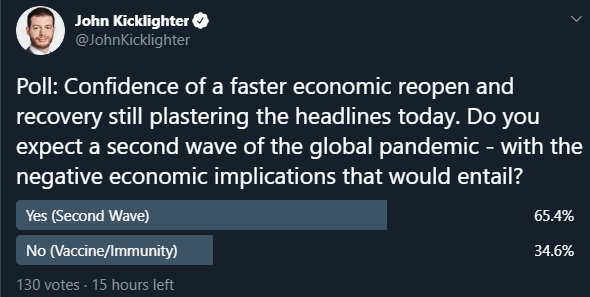 Among the more remarkable performers to start this week, the Euro took a front seat on my radar. That is largely owing to the major currency’s momentum through this past week. While Friday showed a loss of traction for the likes of the EURUSD, EURJPY and EURCHF; there was a more material slide Monday. The most impressive cross on my radar was the EURJPY which had run nearly 9 percent from its low in early may to Friday’s doji candle peak. ECB President Lagarde offered an update following last week’s 600 billion euro stimulus upgrade, but she didn’t exactly add more to speculators to draw from. 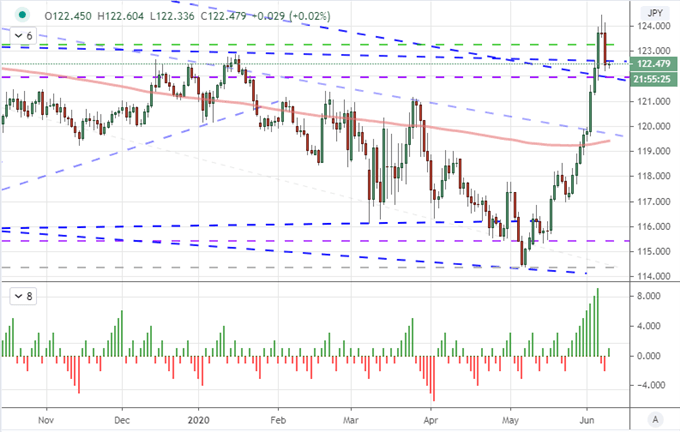 At present, the name of the game is anticipation. With sentiment starting to waver, investors in both US-traded assets and abroad, the attention is on what the Federal Reserve can do to carry speculative appetite forward. The European Central Bank may not have held any sway over sentiment leading into last week’s policy update, but their upgrade has likely aligned some degree of assumption for ‘more’ to fair winds moving forward. The US policy authority announced some upgrades to its Main Street program this past session, which may serve as a temperance heading into a ‘status quo’ update from the central bank. At present, Fed Fund futures have discounted negative rates, but there remains a significant risk for which investors are taking up serious responsibility for in their participation. 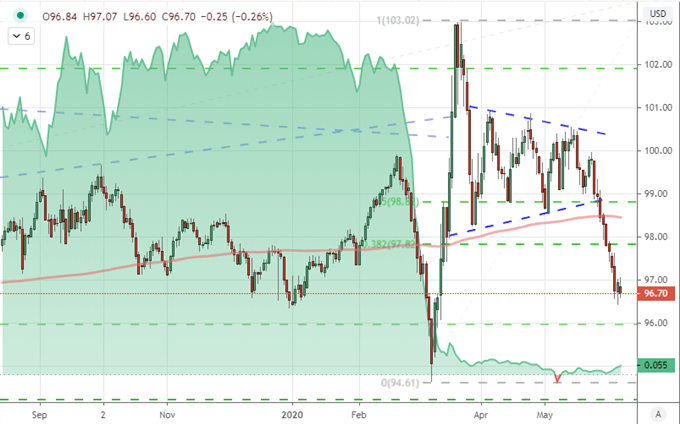