Why the Biggest Dow Rally Since 1933 Isn’t So Impressive

There is eventually a break in all driving trends, and Tuesday’s rebound from risk-sensitive assets was no exception. Taking stock of the day’s bearing, there was a very explicit bid across those battered markets that tend to track an appetite for higher return at the express sacrifice of greater safety (in other world’s ‘risk assets’). Nowhere was the charge more remarkable in my estimation than through the benchmarks for US equities. The advance was palpable for all the key measures I follow, but the top performance was put in by the Dow with an astounding 11.3 percent boom. That is the biggest single-day percentage rally for the ‘blue chip’ benchmark since 1933, easily outstripping the 9.3 percent S&P 500 rally or the Nasdaq’s 8 percent move. For those that want to read into the disproportionate move, this could be deemed a more systemic appetite for depressed speculative favorites, but I believe this is more appropriately a rudimentary speculative bounce with a little more targeted influence through unique fundamentals. 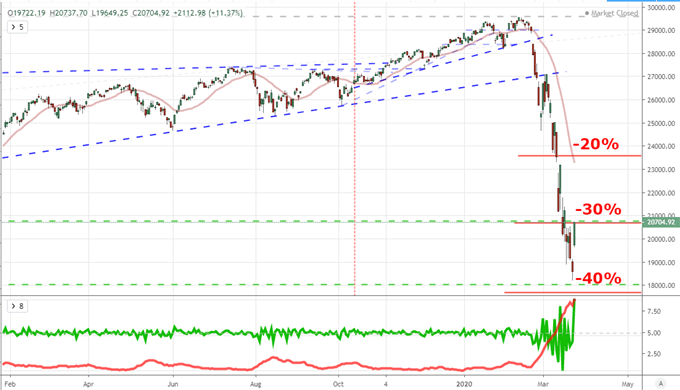 What is worth noting about the particular intensity for the Dow is that the US index has also set the pace with its tumble these past few weeks, stretching almost to a 40 percent correction from record highs. We discussed yesterday the disparity in pace leaning towards the tech-heavy Nasdaq as a possible indication of which industries’ revenues will be more heavily hit by the economic throttling that results from the coronavirus fight. The same considerations may hold in explain Tuesday’s rebound with US President Donald Trump remarking that he ‘would not let Boeing go out of business.’ The airplane manufacturer has lost its status as the principal component of the index, but it is still one of the vaunted 30. Meanwhile, a jump from across the spectrum of speculative measures I like to refer to still gives an encouraging bolt of optimism where little enthusiasm has been able to develop. Then again, a break in the clouds does not always indicate the end of a storm. 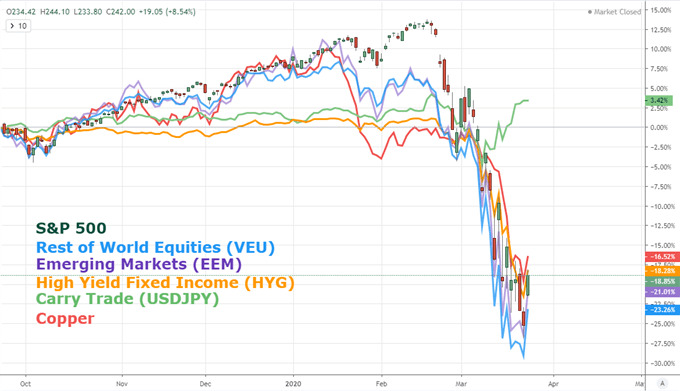 Beneath it All, Volatility

There is plenty of fundamental fodder that can be used to cast serious doubt on any nascent recoveries for the broader market, but my concerns run more rudimentary lines than the collective doubt surrounding the fight against the impending global recession. My true misgivings lay with the level of volatility underlying the market. Elevated activity in the financial system is a resounding signal of uncertainty. Priced based volatility – which is pushing post GFC (Great Financial Crisis) highs – has yet to break its fever, and the check higher actually extends that troubling trend. Further, the implied (expected) measures of future indecision through measures like the VIX and its asset-determined counterparts continue to hold in dangerous territory.

Chart of the VIX Futures and Volume (Daily) 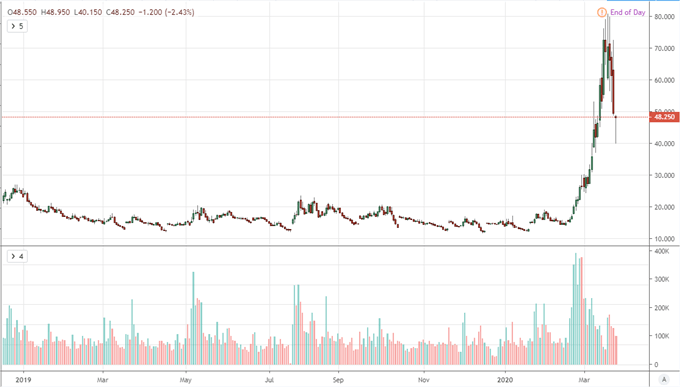 Considered another way, would the Dow have put in for such an exceptional rally if the market were not already moving at an exaggerated clip? It is unlikely. A dramatic decline earns an equally-leveraged correction. Follow through in a recovery remains a difficult achievement. At its core, volatility is a reflection of uncertainty and instability. That does not align well to a sense of confidence that is necessary to draw funds back into the market ready to weather the fundamental uncertainty that lies ahead. More likely, any sign of fresh trouble – or even a shortfall in curbing the pain in principal fears – will send market participants back into a tailspin of despondency. 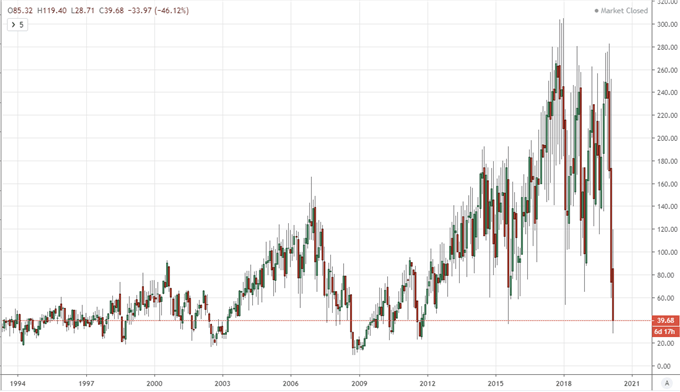 While the turbulence of sentiment in a complex financial system is my primary concern, that doesn’t mean we are operating without a fundamental guidance. On the favorable side of the coin, optimism gathers around a historic global response by policy officials to stabilize the economy and markets. The list of stimulus efforts around the world has grown very long indeed, but the Federal Reserve’s move into purchasing a wider list of debt represents a likely plateau of capacity. Central banks have not been the group slow to respond however. That honor goes to the world’s governments. Stimulus programs from Japan and throughout Europe have attempted to establish a mooring, but the United States is the yardstick; and thus far, the touted $2 trillion stimulus program that is meant as a key component has yet to receive Congressional approval.

As the government response is debated, leading data is starting to offer a glimpse of just how troubled the forecast is looking. Tuesday’s theme on the economic docket was economic tempo established in the March PMIs for Australia, Japan, the Eurozone, France, Germany, the UK and the US. They were all miserable figures in historical terms, but the US data again stands out thanks to the country’s larger scale. A recession awaits the world and its largest component; so a plan that does not account for that scale of pressure may prove a doomed effort. The question we are evaluating for the immediate future though is whether speculative assumption has already raised the bar for US action to a point where it is impossible to live up to expectations?

Chart US Composite PMI from Markit with US GDP (Monthly) 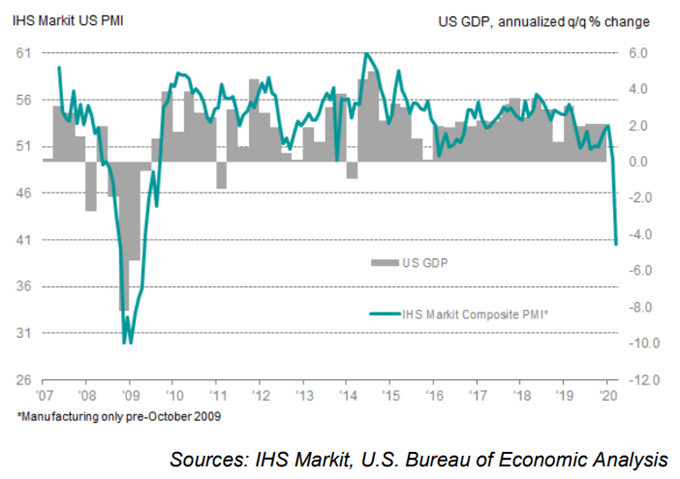 Chart from IHS Markit with Additional Data from the BEA