It has become somewhat routine to see US indices start new trading weeks with a strong charge. Rather than a sign of burgeoning growth or return potential into the foreseeable future, this has become an almost default speculative drive born of appetite for momentum and supported by enough complacency to tamp down any serious concerns that arise from a closer evaluation of the risk-reward the world has to offer. Taking further stock of the quality in risk trends to start this new week, there was a notable mix in performance between high-yield and more 'blue chip' risk. Even the US indices which have set the pace for speculative were not on the same page. The Dow gapped higher at the start, but it did not muster enough conviction to place a new record high like the S&P 500 or Nasdaq. That comparative performance - a ratio of SPX to Dow or Nasdaq to Dow - reinforces that the appeal is for momentum above almost anything else. 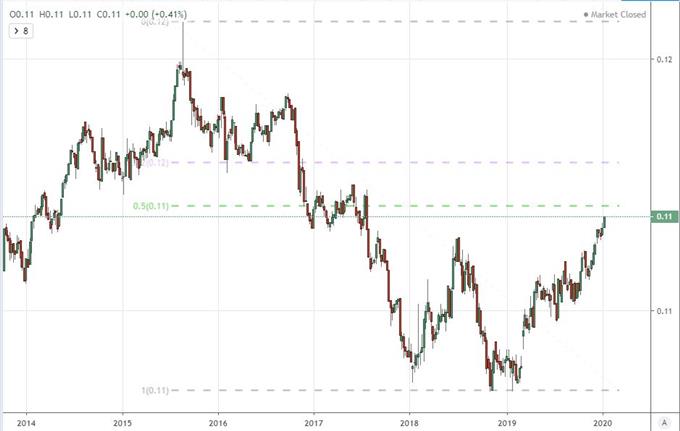 I've made the case many times before that the uneven performance of risk assets is clear in the disparate appetite through exposure. Opportunism favors the momentum that is already established and not discounted assets. When push comes to shove, the markets that fit in the latter category keep coming up short. It is this question of conviction that I'm considering as USDJPY and a few key Yen crosses challenge their respective multi-year resistance levels. From this second most liquid cross in the currency market, we are closing in on the upper bound of a large wedge formation that stretches back six years (at least through the support leg). If these markets are truly lacking for genuine conviction, skepticism on meaningful follow through is warranted and opportunities of fundamentally-supported risk correction would make for interesting opportunities. Consider also EURJPY and CADJPY which are similarly challenging views of technical break. 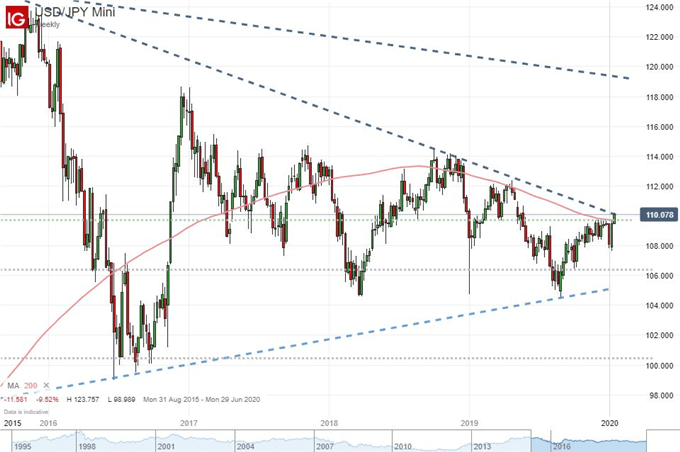 Of the three principal themes I continue to follow for the global markets, trade wars was the unexpected highlight of the past session. The attention is pulled forward to Wednesday when US and Chinese officials are due to sign off on the long-anticipated Phase 1 trade deal. Unless the agreement falls through or is deferred - both would take a serious toll on risk trends - this is an event that is already heavily priced in when it comes to speculative lift. Therefore, anticipation for its contribution to extending the rally for US equities or the EEM emerging market ETF is probably over-exaggerated. AUDUSD is more closely associated to the event, but the lift from the exchange rate is straggling markedly from the relative performance of USDCNH (inverse correlation). With the US Treasury Department announcing it was reversing its 'currency manipulator' designation against China, it is not surprising that the more direct exchange rate is sliding. Keep tabs on USDCNH and mind expectations of the global reach. 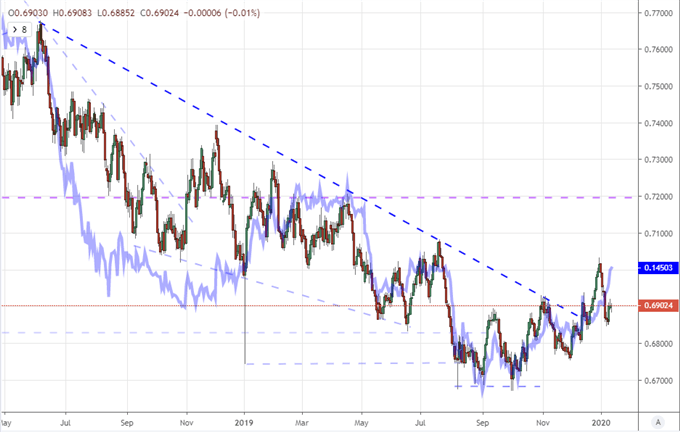 As for the other two, principal fundamental themes, there is still traction for which we should be mindful. For monetary policy, there were two Fed speakers this past session that delivered an optimistic outlook but warned of the fragility of growth moving forward. In particular, Boston President Rosengren repeated the all-too-infrequent warning that extreme accommodation was encouraging excessive risk taking by investors and business across the spectrum. Meanwhile, ECB President Lagarde, it was reported, called on central bankers not to discuss the review of the central bank's policy approach until she had a chance to officially announce it next week. The Fed is also due to update on its review later this month. Ahead, growth will continue to draw closer scrutiny. Following Monday's UK monthly GDP update, we are due the Japanese economic sentiment survey, US small business report and late this week the 4Q China GDP release. Some of these measures carry more localized potential while few have systemic heft.

Chart of US Recession Probability Via NY Fed 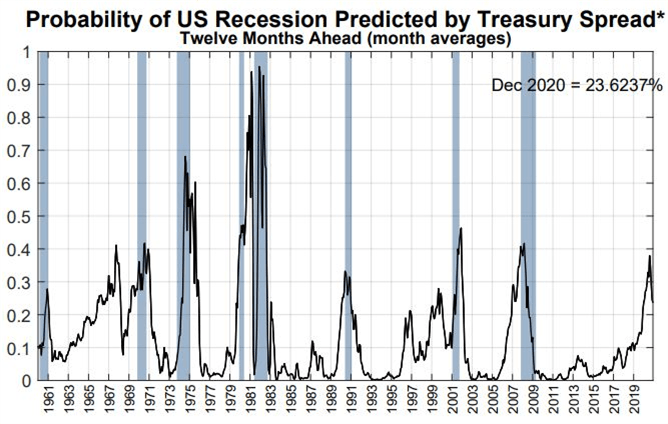 Sterling Moves to the Cliff After Data Run, Dollar Readies for its Own Mix

Looking for more significant movement in targeted areas, the British Pound was under the influence this past session. The government reported November monthly GDP had contracted -0.3 percent in a performance that many are willing to hang on Brexit uncertainty (which many hope will have been resolved after the General Election). The most recent trade balance and manufacturing activity report were similarly troubling. In turn, the probability of a BOE rate cut has moved up measurably. Another MPC Member, Vlieghe, has suggested in a recent op-ed that he is considering a vote for an easing should economic conditions soften further. Overnight swaps through year end see a 25bp cut as a certainty (110%). In the meantime, a range of pairs like GBPUSD, GBPCHF and EURGBP have moved into break territory. Watch closely. 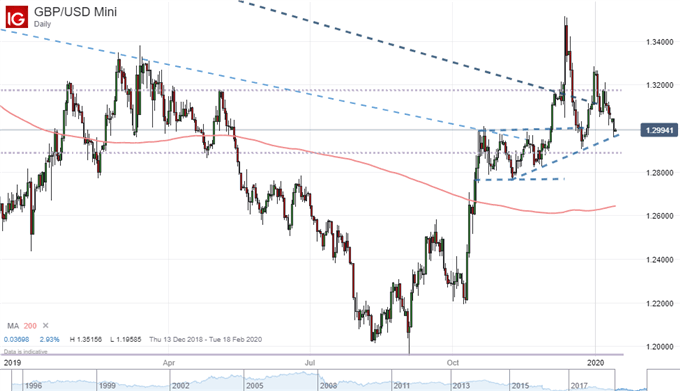 Through Tuesday, the scheduled event risk will be most pressing for the US Dollar. The benchmark currency is moving in on a run of meaningful event risk that has proven market moving at different times in the past. I remain somewhat skeptical that the mix will leverage serious amplitude in this particular run when the role of the Greenback is under so much scrutiny. Of the list of high-level reports, the US consumer inflation (CPI) figure will draw the most attention. This is the market's favorite price gauge and thereby an over-worked Fed forecasting tool. Moving that needle is unlikely. I will pay more attention to the US small business sentiment survey from the NFIB and the US economic optimism survey from the IBD, but their chance for market moving is substantially lower. Perhaps the US earnings run that starts Tuesday will offer some relative leverage? If the technical bounds and general market conditions hold, the Dollar is one of the most appropriate range candidates out there. 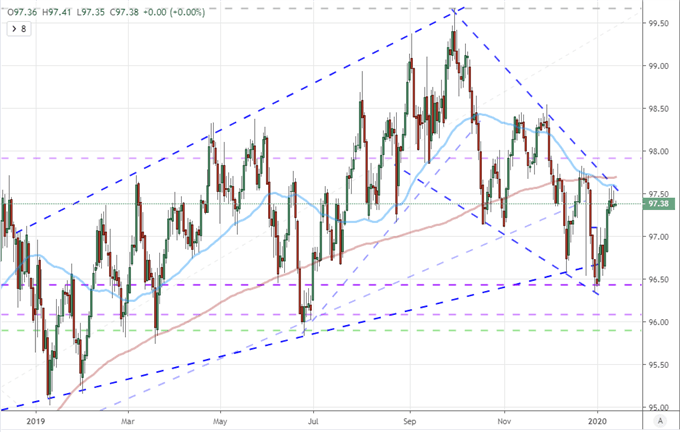