S&P 500, Gold and Oil Put In for Enormous Volatility and Short-Term Reversals

The US-Iran Situation Explodes and Then is Defused

I recorded a video yesterday, but had to nix it shortly after wrapping owing to the unexpected surge in uncertainty and volatility following the unexpected escalation of already-strained relations between the United States and Iran. Since the former launched an airstrike in Iraq that killed a top Iranian general among other this past Thursday, the market has been holding its breath waiting for retaliation. That response finally came Tuesday evening after US markets were closed. Two waves of rocket attacks on a US military base. Risk assets dropped immediately while havens soared as everyone awaited the casualty report and President Trump to execute on its supposed pre-planned response to any efforts seeking retribution. When it was reported that there were no US service member casualties, market participants started to see the possibility of an 'out' for both sides to call it a day, but that decision rested with the White House. 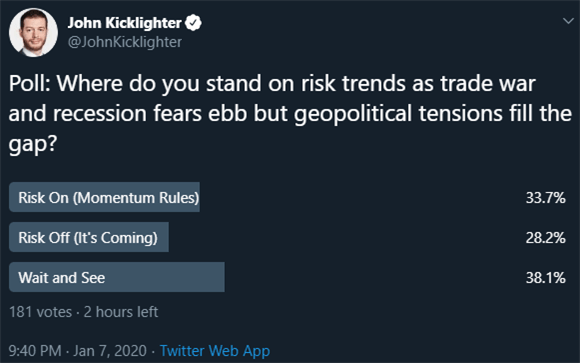 A tweet Tuesday evening from President Trump struck a tone of unexpected reticence and almost optimism, but that didn't soothe fears by itself. "All is well!" remarked the President in social media, but it was the vow to make a statement Wednesday that set anticipation. In early New York trading hours this past session, investors waited impatiently for Trump to make his speech - in true dramatic form, he kept us waiting an exceptionally long time. Yet, when he spoke, Trump referenced diplomacy alongside the requisite tough persona standard with his administration, well balanced against his Iranian counterpart. So long as there isn't an explicit follow up action from either side - there were some rumbles in reports - the market will be urged to return to complacency. That is showing through in the market's interest to revert to speculative reach through this past session. 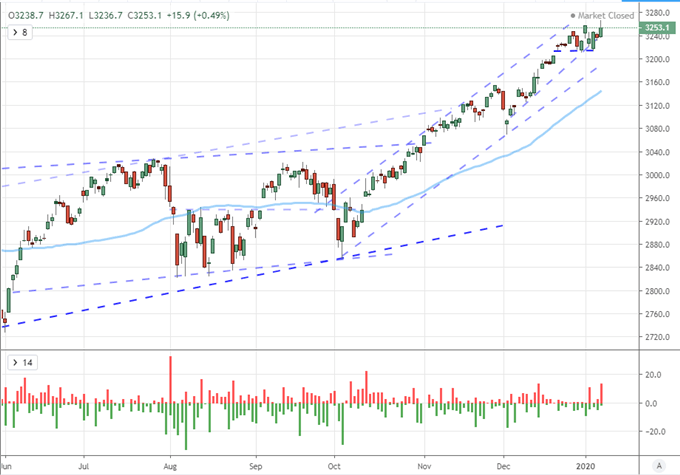 Potential Registers Most Heavily in Geopolitical Threats, But the Field is Wide

Taking stock of the market's response to the past five days of extreme uncertainty, we certainly haven't registered the degree of risk the situation warranted - but that seems par for course. In just the past session, the volatility between Iranian retaliation and the verbal stand down was unmistakable. The result for my preferred benchmark risk measure, the S&P 500, was a reversal from a tentative breakdown back to an intraday record high - an incredible turn of events. In fact, we swung between a 10-day low to 52-week (and record) high within a single day which is unprecedented - a stat pointed out SentimenTrader. That wasn't even the most impressive performance on the day. Safe haven leader gold posted it biggest intraday reversal (upper wick) and daily range since the US Presidential election in November 2016. Meanwhile, oil registered a tail and daily range that was the largest and second largest in five years respectively. Exceptional moves.

Chart of US Crude Oil and 1-Day True Range (Daily) 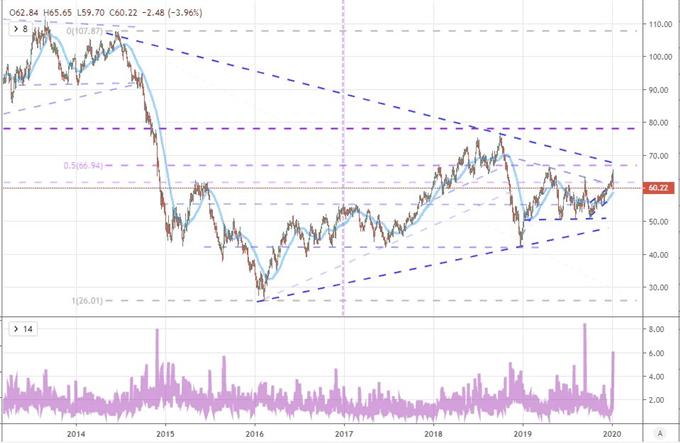 It is natural, given recent events, that geopolitical tensions is considered the most potent of systemic themes. There is a cognitive bias referred to as recency bias that suggests investor give greater weight to the most recent influence. That norm is born out in the survey I conducted among traders in Twitter. The wide-ranging potential yet severe impact of the US-Iran tension is an understandable global risk - as is the anticipation for the US Presidential election in November. However, we cannot lose sight of the other persistent risks plaguing the market in unstoppable waves. On trade war, we are waiting for next week's Senate vote on the USMCA and the signing of the Phase 1 deal. Thereafter, a self-imposed US-France/EU deal is due on January 20. For concern over growth, the US ISM service report bought some time, but the World Bank updated its outlook this past session with yet another round of notable downgrades. 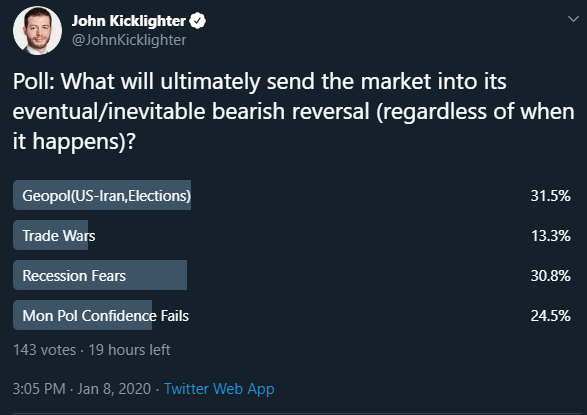 Capable, Scheduled Event Risk is Light but for Friday NFPs

If we are looking for catalysts that can reasonably set off systemic trends - much less circumvent these currents to urge volatility all on its own - there is very little on the docket that I would hold in such high regard. European data offer German growth and EU employment reports which can move the needle on economic outlook and ECB anticipation, but the probability is low. Fed speak is worth watching, but I am not setting expectations particularly high. If we were to keeping running until we hit an overwhelming force in event risk, we would run right up to Friday afternoon's NFPs. The jobless report for the largest economy carries weight in growth and Fed rate forecasting, but I am skeptical of its seismic pull short of an overwhelming miss. Since this is a situation of anticipation, the market impact is more heavily a hurdle to activity than a reliable driver. 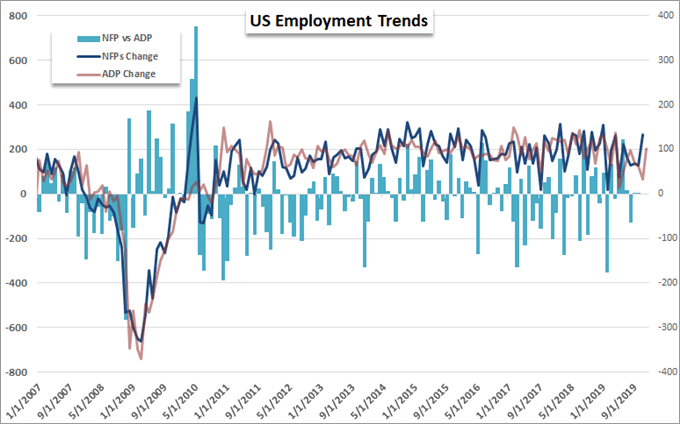 Chart Created with Data from Bloomberg by John Kicklighter