{{GUIDE| BUILDING_CONFIDENCE_IN_TRADING|How can you find confidence in your strategy?}}

Heading through the final weeks of 2019, we are facing an inevitable wind down in liquidity. That doesn't ensure that volatility will be held in check - as a shallow market can amplify sudden developments severely - but it is the most probable course for the market to follow. This is an ideal time to start consider the key themes, risks, opportunities and more through 2020. DailyFX has written our first quarter 2020 forecasts for the major currencies and financial market benchmarks which will be released early next week. What we focus on in this movie is my view on the top fundamental 'risk' for the major currencies and asset classes heading into the new year.

Dollar: The Most Fundamentally-Challenged of the Major Currencies

The world's most liquid currency - and arguably its most liquid asset overall - represents a quandary. Its restricted progress through nearly two years represents one of the most throttled periods for the benchmark in its history. In my opinion, this is not a function of a dearth of fundamental influence but instead an overabundance. There are too many systemic and local matters vying for the Greenback's attention that it keeps the currency contained. That spell is likely to break in 2020 just by both sheer statistical probability and by an inevitable crack in a unreasonably calm facade of the financial system. What is likely to command the Dollar's attention? Given the depth of indecision, I believe nothing short of systemic risk trends will dictate a clear move. A crisis-level risk aversion may finally trigger the absolute haven appeal of the USD, but anything short of that severity may actually cut the relative growth advantage and Fed outlook, thereby weighing the currency. 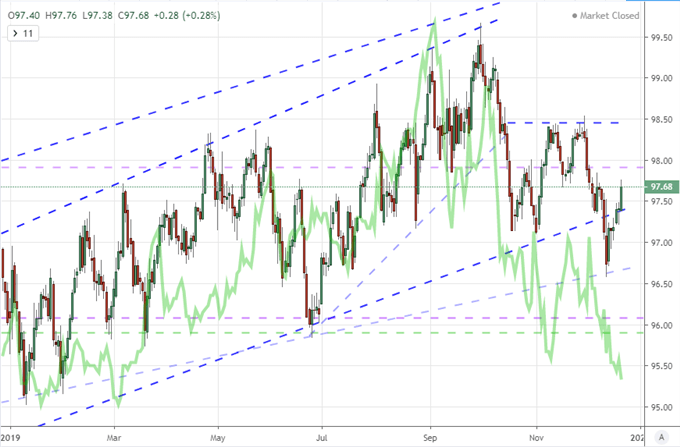 For the world's second most liquid currency, it can be difficult to pull the Dollar out of the equation. Yet, looking at an equally weighted Euro index, the past year's performance looks much the same as EURUSD. The Euro has slowly retreated without triggering any sudden accelerants along the way. For this currency, there is an unmoored risk connection, a Brexit connection and more localized issues that will factor in. That said, the true variable is in the ECB's monetary policy. The group has quickly shifted from tentative normalizer back into an explicit all-in dove. Given the return to QE and willingness to push the negative deposite rate further into the red, it was clear the authority was willing to push the envelope. Failure in the effectiveness of ECB policy would be an acute problem for the Euro in 2020, but it carries far more pressing issue with global markets. 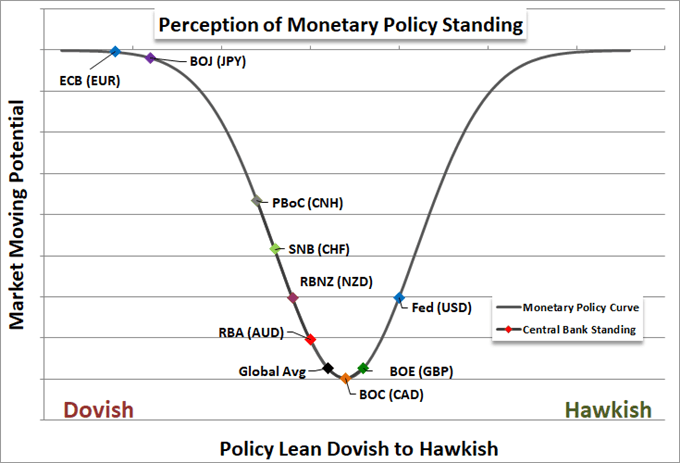 When it comes to the Yen, monetary policy has been a very prominent theme over previous years. Much to the Bank of Japan's chagrin, however, their influence has faded quickly to the backdrop. A constant effort to expand the stimulus border has drawn a belief that the Japanese authority has lost its influence over local inflation, economic expansion and capital markets. That in turn leads the Yen back to its more rudimentary role as a funding currency for carry trade - which shares many of the same qualities as a 'safe haven'. If risk aversion kicks in early through 2020, I will look to pairs like USDJPY to respond readily. 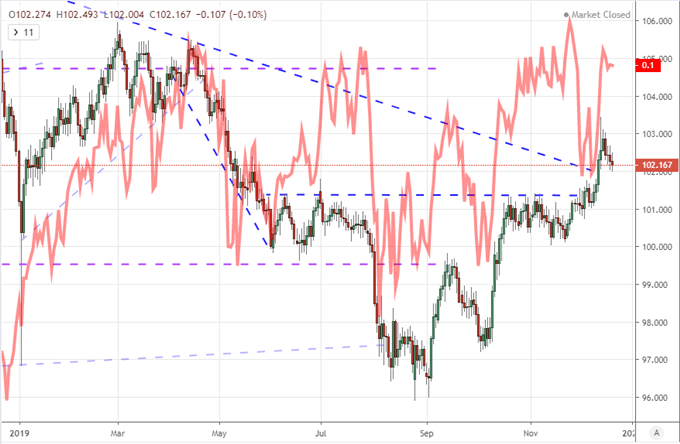 Pound: Brexit is the Key Driver for a Fourth Year Running

After the UK election earlier this month, there are those that likely were hoping that it would be a new day for the British Pound. Having followed optimism to skepticism around the pressing Brexit, many likely believed that the UK election win for Prime Minister Johnson and the Conservative Party would finally present a clear path for the troubled Brexit scenario. That in turn could help push the focus on something else material to the Pound that wasn't quite as straightforward in its bearing. Instead, Johnson's insistence that no extension to the negotiations around the transition should be granted beyond December 2020 only restores the concern. In the year ahead, Brexit is due remain a principal driver. 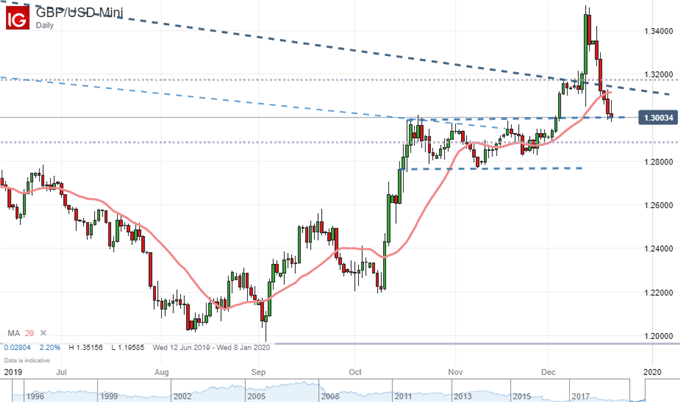 Chart of GBPUSD from IG

For the Australian Dollar, there is a growth and risk appetite relationship to expect out of its long-term standing as a funding currency relative to the other high-credit rating majors. That said, we aren't facing traditional carry-founded risk based trends and global expansion of merit is not the norm. This shifts the focus for a benchmark like the Aussie. Given the correlation of AUDUSD to the USDCNH (Dollar-Yuan), it isn't difficult to highlight the baseline driver. China's health, and thereby trade wars, should be the immediate focus for traders in this particular corner of the FX pond heading into 2020. 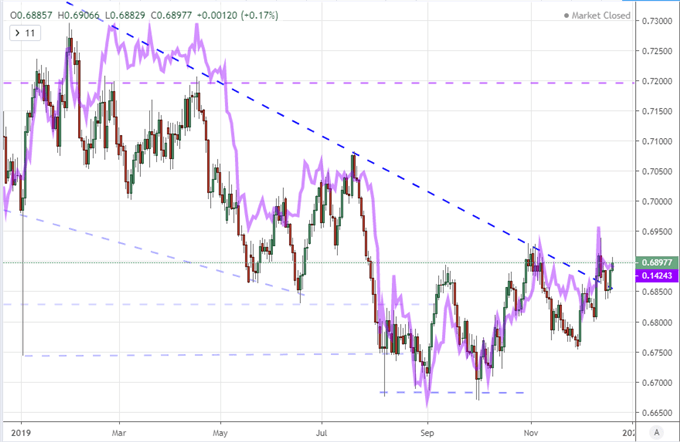 In evaluating a range of risk-leaning assets across the global financial system, there is a range of performance that seems to depend on the ubiquity of the asset in question. At the top of the list is equities. Given how familiar this asset is in portfolios, it makes sense that there is a leveraged demand for stocks whether risk trends are bolstered by reliable or unreliable means. Growth, dividend, trade relations and other more mundane measures are a distant second to raw investor sentiment. In particular, I am partial to the US benchmarks. And, if you want to be particular about the most representative baseline, the S&P 500 is the most heavily traded derivative index. 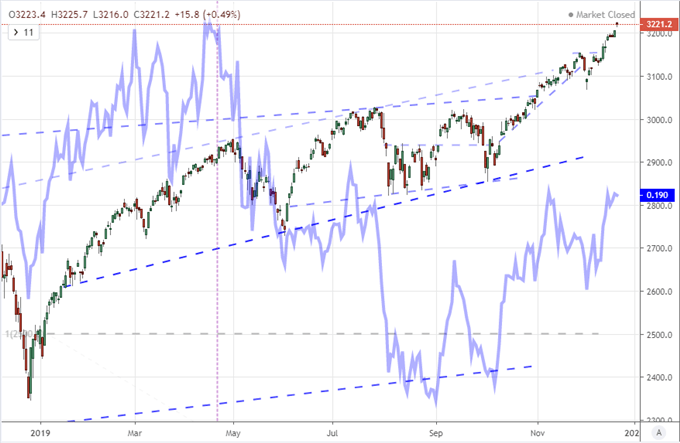 Crude Oil: Return to the Textbook Supply-Demand (More on the Latter)

As far as finding key fundamental drivers goes, oil may be the most readily accessible asset in the mainstream. Risk trends certainly plays in here, but the real driver is more textbook. Supply-and-demand is what the old hands talk about when it comes to this market. For crude, there is a lot of headline space dedicated to talk of supply influence; but in reality, demand is showing the greatest influence for momentum and direction. Given the influence of oil as a fuel for economic expansion, this is ultimately a market dependent on traditional global growth expectations.

Chart of US Crude Oil with 20-Day Moving Average (Daily) 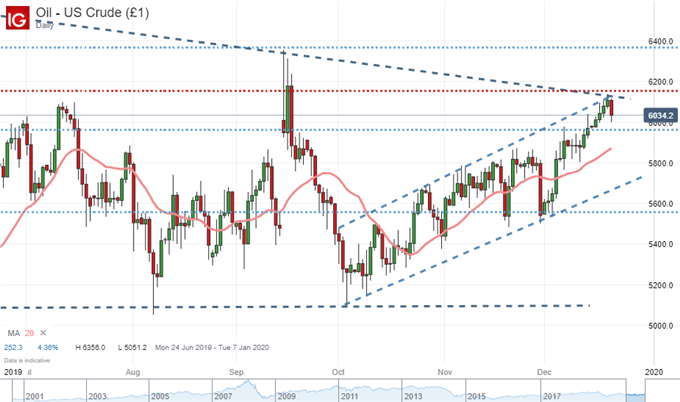 Finally, gold is perhaps one of the most referenced benchmarks - next to Dollar and S&P 500 - in my day to day analysis. The precious metal plays many roles depending on what is happening in the global financial system. As it stands now, the combination of questionable risk appetite and extreme efforts of the world's largest central banks positions this commodity as a benchmark for a more severe break of financial instability. Should risk trends collapse and draw skepticism over the ability of central banks to maintain calm, the precious metal will be one of the few outlets that can promote reasonable stability. 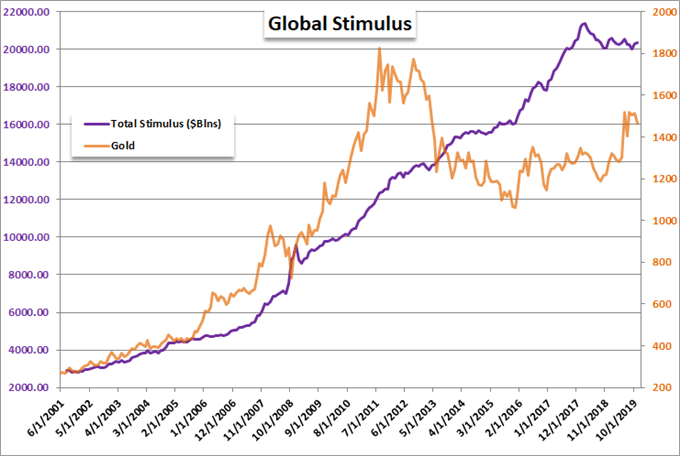