We ended out this past week with a remarkable statement from the market's favorite benchmarks for speculative appetite: US equity indices. Despite a slow meandering through most of Friday's session, the Dow, S&P 500 and Nasdaq all caught an impressive bid before liquidity drained for the weekend to notch record highs across the board. Setting record highs is a milestone that will generate its own momentum through sheer virtue of the attention it draws with dedicated headlines compounding the speculative follow through. Further, as the best performing risk-oriented benchmark, there is a haze of enthusiasm that hovers over the market even as the vast majority of the markets trade at a far deeper discount relative to their own records.

Chart of the Dow and Opening Gaps (Daily) 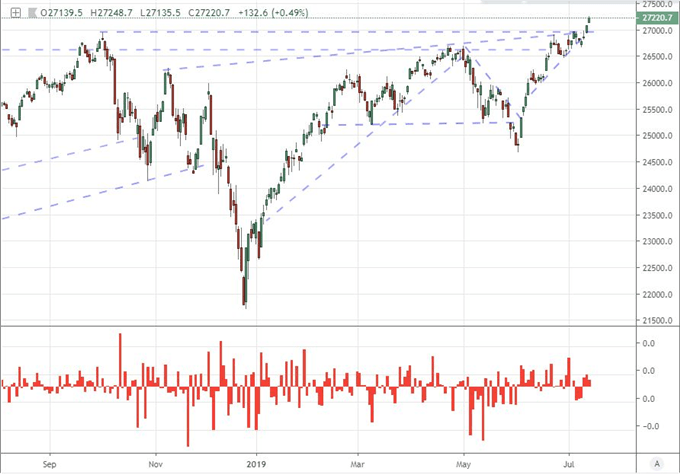 In fact, a look to the relative performance of benchmarks between the US indices to global equities, emerging markets, carry trade, commodities and more shows the Dow in a very unique position. In fact, the signposts for most of these other assets are not even pressing monthly high - much less records. That is a problem as it suggests there is not much enthusiasm for investor appetite generally but rather a targeted opportunistic effort to squeeze 'a little more return' from a segment of the market that is drawing greater and greater appeal for its momentum alone. That is innately a temporary source of lift and a distortionary one at that. Eventually these divergent assets will converge; and the farther apart they are, the more substantial the collapse in excess premium. 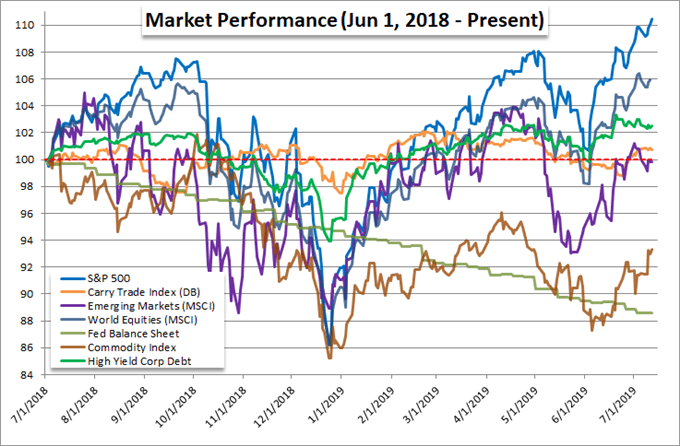 While speculative appetite can act as its own justification, the market is not as easy to placate as it once was. There was certainly a fundamental source of this past week's isolated enthusiasm. The various cannon fodder for Fed rate cuts - Chairman Powell testimony, FOMC minutes, various Fed speeches - seemed to solidify anticipation of external support from the world's largest central bank. Multiple rate cuts this year is a high probability and a cut in July is very likely. That said, the ardor affording certainty to a move at the end of the month and a 22 percent chance of a 50 basis point cut is beyond over-indulgent. It is hard to raise expectations beyond the current setting, which means the present forecast will have to be sufficient to carry a trend - which is antithetical to the financial system's general state. So, as we pass into the interim period between Powell's testimony and the actual rate decision on July 31st, will US indices maintain their position of superiority to the general market? I wouldn't be too confident in that scenario. 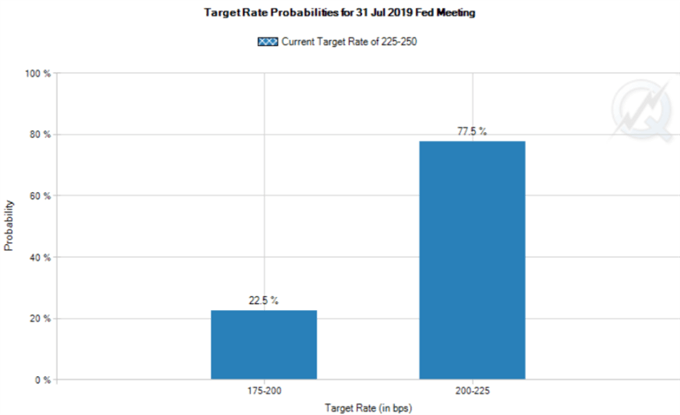 Without Fed forecasts throwing its weight around with monetary policy speculation, it is is unlikely that this theme extends any momentum through the coming week. As market participants seek alternative sources of fundamental motivation, they will land upon themes that are signaling a consistent deterioration in health. If we are going by scheduled event risk, this week's top listing comes at the very beginning of the period: China 2Q GDP. The world's second largest economy is expected to report a further slowing of its generational pace of growth to hit a clip that is the most anemic in nearly three decades. Given the bombastic references to the economic miracle in this particular country, the fallout could prove more significant than the market has accounted. Furthermore, Singapore's (the 34th largest economy in the world) painful -3.4 percent quarter-over-quarter collapse in 2Q growth reported Friday sets a worryingly low bar. 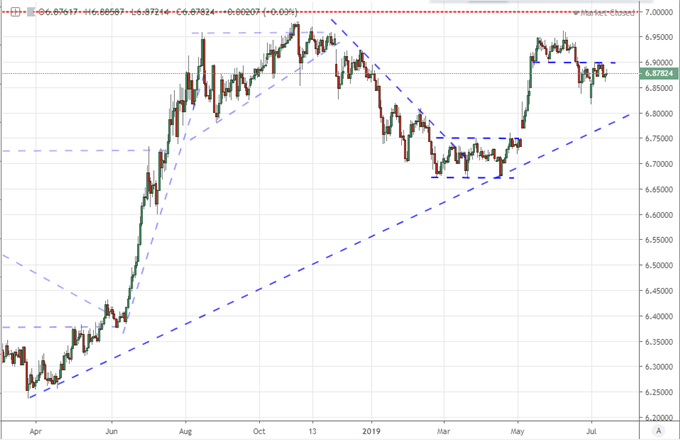 Aside from the official Chinese growth update and some isolated data points from the developed world calendar, another economic story for this coming week is the kick off of US quarterly earnings. Microsoft, IBM, Netflix, Johnson & Johnson and the major banks are just a few highlights for the run of updates that are scheduled. GAAP is a flexible medium for crafting beater-than-expected reports; but the leveling out of consumption, the fade in consumer sentiment the cold winds from trade wars are slowly but surely lacing their way into Corporate America's performance.

A resurgence of trade war issues is another pressure point for bullish intentions. US-China negotiations are supposedly ongoing, but the threats have noticeably increased since the G-20 Summit when a further immediate escalation in US tariffs on an additional $300 billion in Chinese goods - and the retaliation to such a move - was averted. China announced it would sanction those US companies involved in the arms sale to Taiwan and President Trump repeated his belief that China was using monetary policy to artificially benefit its own economy. A tip into a currency war is the most prominent risk between these two. Meanwhile, France's decision to pursue a 3 percent digital tax against large (mainly US) tech companies, with the UK contemplating a 2 percent levy and the EU investigating the situation; the risk of a steadily escalating course of retaliation can develop between the US and Europe. 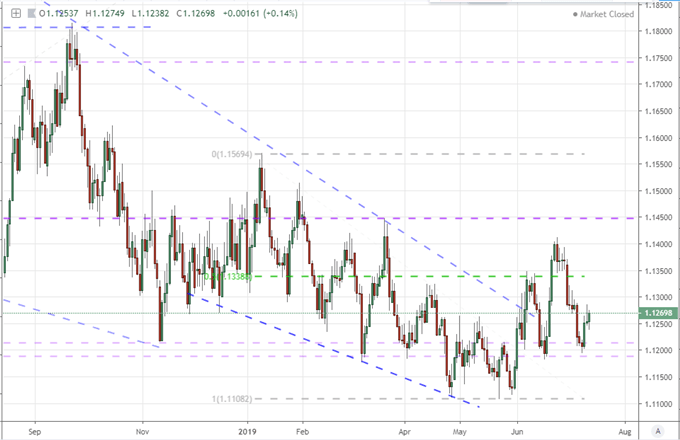 For technical pacing, the potential for trends is generally very low almost regardless of where you look. Given the uneven footing for risk trends, the likes of the Dow will struggle to fulfill the 'breakout with follow through' that most traders pursue. Yet, this isn't the only place where practical conditions simply can't live up to the technical promise. The Dollar is in a similar position. While EURUSD is firmly within range, GBPUSD has pushed an exceptionally stretched run, USDCAD recently slid through 1.3050 support while breaking a H&S pattern and AUDUSD is tracing out the stages of a very prominent inverse head-and-shoulders pattern. All provocative yet all subject to the market's current laws of physics. 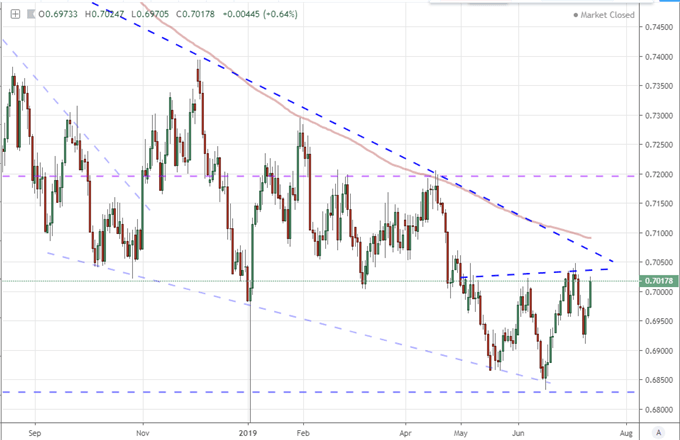 One asset that could stray from the pack and make a true run for it is gold. The precious metal draws appeal from a number of fundamental wells that all collectively come to the same conclusion. Either fundamental conditions continue to weaken naturally which pushes us closer and closer to full risk aversion that in turn leverages the appeal of gold's safe haven properties. Otherwise, the central banks will successfully step in to fill the value gap once again by indirectly devaluing the world's most liquid currencies collectively to render stimulus which prompts a flight to 'cash with stability' that will migrate out of traditional currency and into this anti-fiat. Keep tabs on gold. If trade wars worsen, growth drags and/or monetary policy efforts accelerate, the case for the commodity strengthens. 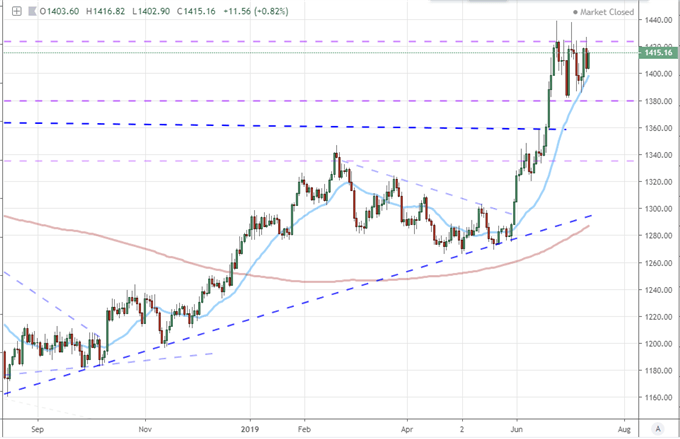 Looking elsewhere across the FX market, there are a few highlights that can earn some short-term charge, perhaps enough to jump start a measured swing that stands out in these restrictive conditions. In fact, when there is a more concentrated and early-in-the-week spark, the potential for a decent run is far better. That said, the New Zealand 2Q CPI reading can prove meaningful enough through further carry reduction if inflation softens further. The Australian Dollar's top local listing is the Australian employment data; but if China allows for a significant shift in its local data Monday, the implications for the Aussie can be substantial. Then there is the Canadian Dollar which doesn't have the most concentrated event risk, but the climb these past weeks put it in a stretched position against comfortable ranges. We discuss all of this and more in this weekend Trading Video.