If any of the major fundamental themes that we have been tracking these past months was already in command of the market's intent - direction and intensity - this past session's headlines could have shaken the market's refusal to commit to a clear course heading. Alas, both skepticism over the robustness of recent developments and the market's slipping back into the habit of utter complacency has found provocative headlines less able to establish the clear fundamental traction so many expect and even yearn for - most would prefer trend over volatile indecision. This past session, the most overt thematic stir would come through growth considerations. The Chinese 1Q GDP figures starts the weeks-long stretch of official government quarterly growth figures that are spread out for weeks over the season. Few still judge country's updates on a like-for-like basis relative to the other major economies' updates, so the official 6.4 percent annual pace didn't stoke immediate enthusiasm. This was a 'better than expected' reading owing to the official forecast for a slip to 6.3 percent which would set a fresh multi-decade low pace, but it doesn't carry much enthusiasm beyond averting deeper pain. The monthly data (retail sales, jobless survey, industrial production, etc) draws the same degree of skepticism. As caveat-laden as Chinese growth is, the general state of growth influence over risk trends is fighting an uphill battle against liquidity. For that reason, it is reasonable to maintain a similar expectation of restraint heading into this week's final fundamental flush with April PMI figures.

Another theme of merit and depth that is coming up short on market influence is the sway of trade wars. Once again, China was crowding out the headlines this past session with reports that negotiations were near some critical inflection point. According to unnamed sources quoted by the WSJ, the two sides were heading for an agreement to be struck sometime towards the end of May. That would be encouraging, but we have seen this same time frame floated in the past weeks, so presumably this is just a questionable air of 'confirmation' that a possible course is solidifying. What's more, we have seen confident statements of clear timelines in the past fall apart under political strain. It is therefore little surprise that the market treats these rumors with serious skepticism. The same uncertainty is being applied to reports that the European Union (EU-27) has agreed to negotiate with the US on trade moving forward. That suggestion was circulated Monday, but the optimism neither spread to equities (risk) nor EURUSD. President Trump weighed in on the suggestion saying the commitment to only discuss industrial goods didn't suit his intention with the auto tariff threat circulating in the background. Where USDCNH and AUDUSD were teased by these themes, no trend intent seemed imminent from either - and the implications for broad risk trends didn't seem even seem to register. 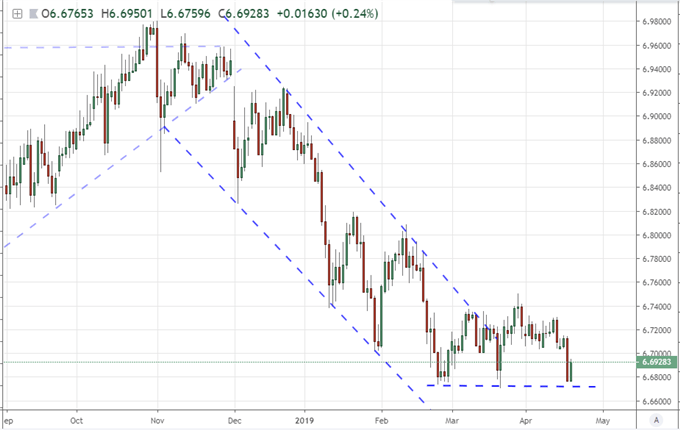 There's Your Problem, You're Low on Liquidity

Risk trends this week have proven notoriously uneven and generally lacking. Yet, from a wider comparison of risk assets, it remains clear that there is a preference not for value but rather the outlier potential for sustained momentum for momentum's sake. We can see this at work in the comparison between the US equity indices. The Dow and S&P 500 have struggled with any semblance of direction since the week began. In fact, the S&P 500's range Wednesday completely enveloped the tepid scope of market activity the preceding three trading sessions. Given how restricted the past day's range was, that does not inspire volatility conversations. The outlier seemed to be the Nasdaq which gapped higher on the open for a sixth straight trading day, the most recent effort pushing the tech-heavy index to a record high. While follow through was nonexistent, the disparity with the blue-chip and broad indices is remarkable. Over the past years, the technology sector has outperformed all others which has afforded it significant speculative prestige - a seemingly self-endorsing appetite. We find this same contrast between US indices and equities the world over or emerging markets or junk asset any number of risk metrics. In other words, sheer speculative appetite seems to control the day. 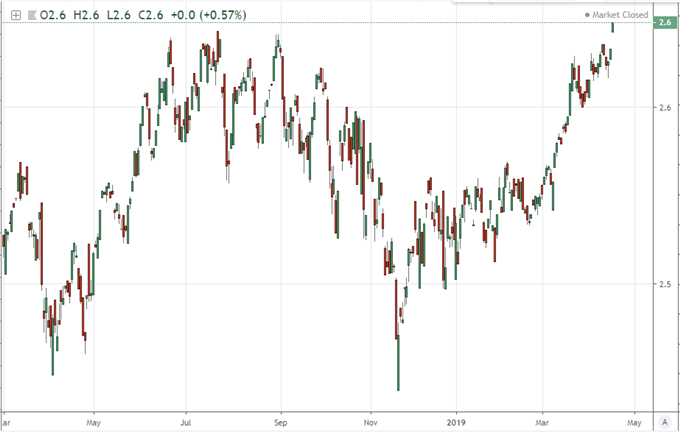 While there is an overt flaw in the market's appetite for risk assets, this fundamental inequity is not what presently holds the financial system up. The real issue this week is the drain in liquidity that we are dealing with. While not all markets will be close, the US and Europe will be offline on Friday (and the latter will be closed into Monday). That will severely limit the depth of the markets ahead which will almost certainly cap intent found on the basis of speculative appetite itself. Historically, there is a strong correlation between market volume and volatility - though there is considerable debate over which leads the other. I'm of the belief that the leading factor depends on the circumstances. If we are to project a record high from the S&P 500 or Dow, that would imply a serious level of market-wide intent if there would be any hope of follow through. Mustering this against our troubled economic backdrop would be hard enough if markets were topped off. In liquidity-drained conditions, forging such a move is nigh impossible. That is not to say we may not see the shallow conditions amplify volatility. Yet, any breaks should be eyed as prime candidates for failure.

With a struggle in the market backdrop ahead, I suspect little different from the most liquid currency market participants. Yet, with some of these benchmarks, there are more overt signs that an eventual break is inevitable and more likely violent when it does come to pass. I've mentioned before that the 40-week range for the DXY Dollar Index is sporting one of the most constrained ranges in history - only a period in the Summer of 2014 and a spat back in 1996 offered up a more powerful sense of restraint. Yet, 40 weeks is a medium-term signal. Consider from more recent weather patterns the scale of price action over just the past 10 trading days. This span relative to current spot is also one of the smallest we have seen in a long time. Breaking from of such engrained lethargy is not easy, but it is far less likely to occur during such a truncated period market activity as the holiday conditions we are dealing with ahead. Just as the trade balance failed to the Greenback this past session, I am not setting my expectations high for the retail sales and April PMIs on tap Thursday. 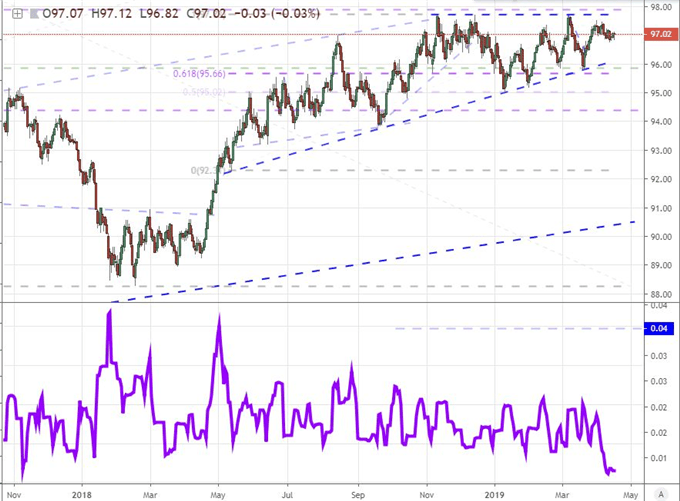 The other 'majors' are facing restrictions all of their own. For the British Pound, we were already struggling with the unresolved Brexit threat through the recent agreement by the EU-27 to extend the deadline for Article 50 discussions another six months to October 31st. Normally, this news would stir hope that more time would allow for a compromise to eventually by found, but the speculative interests have grown far too hardened to observe such optimism. The UK inflation figures had little impact on the Sterling, so I don't expect much more from UK retail sales or the Bank of England's (BOE) credit conditions survey. Brexit uncertainty is an effective disincentive. Meanwhile, the Euro has shown little proclivity for any fundamental influences - even those systemic issues that we track. The PMIs through Thursday are likely no different. If you set your expectations to volatility primarily, it is less likely that you start with unrealistic beliefs that the market just can live up to. That said, the Canadian Dollar's positioning for favorable growth and financial conditions as well as the Aussie Dollar's slide despite the Chinese news should make for interesting marks. We discuss all of this and more in today's Trading Video.