In a replay of the previous session, risk trends put in another concerted effort to charge speculative appetite through the day's open only to lose traction before New York closed out the candle. Once again, the bid was a broad one with global equities showing no geographical bounds to the appetite while reflection on alternative assets (emerging markets, sovereign yields, commodities, carry) signaled it wasn't just a move for stock traders. Yet, as convincing as the breadth of bullish interest may have been, the retreat into the US close was just as clear. The S&P 500 illustrated this well. The benchmark index opened with another exceptional gap higher on the open - for the biggest such back-to-back jump I saw on a visual inspection in recent history - only to lose all the progress made during active trade. Unlike the previous session's reversal, the subsequent change in tack didn't 'close the window' (the technical term for retracing the initial gap). This pace of two steps forward and one step back suggests there is definite hesitation to escalate the painful bouts of trouble these past few months into a systemic bear trend during a month that is historically a period of restraint in activity level and advance in speculative assets. On the other hand, the intraday reversals reflect exactly the underlying volatility that keeps market participants on high alert. When market conditions are stable, there is a greater resilience to fundamental catalysts. Yet, when the backdrop is so tumultuous, there is far greater potential for simple jolts to balloon into more systemic moves. Traders watching equity indices for their sentiment cues should also include volatility measures for a more comprehensive assessment.

Prime Minister May Survives a No-Confidence Vote, Back to a Fraught Brexit

This past session, there were a few fundamental themes that the market would dip into. Hands down, the most consuming headlines were those fixed on UK politics. For once, we were offered a break from the ongoing Brexit spectacle as investors watched for the results of an important vote in Parliament. A no confidence vote was called on Prime Minister Theresa May's leadership against the backdrop of a sharply divided government where conservatives have claimed a shortfall on the explicit withdrawal promised after the referendum and a more restrained group placing greater emphasis on access to Europe's economy and financial system. When the prospect of a challenge was still just rumor, the Sterling slid as yet another layer of complication was added to an already-opaque situation. When the vote was confirmed, the Pound actually started a steady march higher as at least some terms were clear while certain scenarios were trimmed. That preparation in turn muted the market's reaction when it was announced that the Prime Minister survived the vote with assurances that she would not stand on the next election. With that uncertainty out of the way, the calculus returns to May's terms for 'her Brexit play', no deal or no Brexit at all. The same troubles remain, we have just spent a few precious days on distraction. The questions now are: will the EU make any further concessions now that they will not have to deal with a more aggressively conservative counterpart or whether the possibility of a second referendum will receive any further serious consideration. 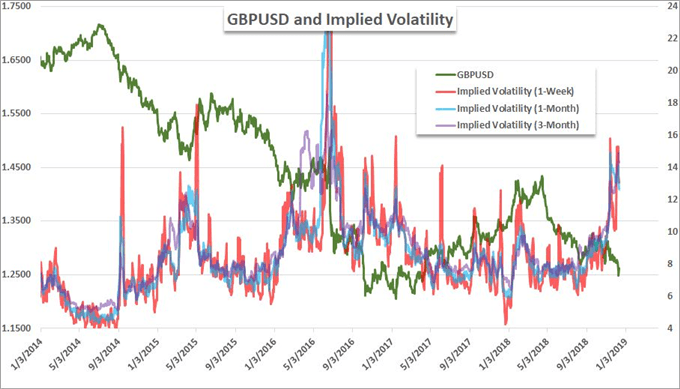 Looking ahead to the final 48 hours of trading this week, a single currency clearly earns the rank of the most fundamentally at-risk major. The Euro has dealt with a number of themes through rumors, headlines and pure speculation; but we finally reach events that will establish clear milestones on particularly important matters for the shared currency. The more reliably black-and-white event will be the European Central Bank (ECB) rate decision. While we will readily register whether the group holds rates and cuts off its Quantitative Easing (QE) program as previously planned, the market is more highly tuned to the bank's intent amid a broader shift in global policy. This will put the focus on forward guidance. This is the same consideration for the Federal Reserve - the rate hikes themselves generate little reaction. Rather, it is the adjustment to forecasts for future moves that earns the market's attention. On that front, the notable downgrade in hawkish ambition from the BOE and BOC with heavy speculation of the same from the Fed, the market will clearly expect a softer tone from the ECB. It is not so easy to set a bias on the European Union's summit. The group's leaders are due to meet over two days to discuss a range of topics, but Brexit and budgets are at the top of the list. Italy's Prime Minister reportedly suggested their budget proposal has been lowered to a 2.04 percent deficit to GDP ratio target, but the may still run afoul of their counterparts' acceptable range. Meanwhile, France's Macron has vowed to boost spending to soothe rioters and the result is expected to below beyond the 3 percent threshold. This will be an interesting conversation. And, just to make sure that there is always uncertainty to deal with, Euro traders should also consider the spillover influence of Brexit along with the lingering threat of US tariffs following the Trump administration's rejection of the EU's trade reform proposal. 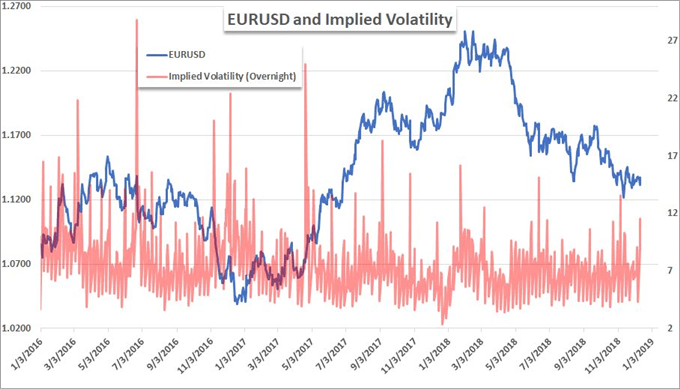 Trump Weighs in on the Fed, Kiwi is the Best Stretched Candidate, Alternative Commodities

For the immediate future, volatility and European currencies earn closer scrutiny. However, these are not the only bouts of activity to expect throughout the financial system. The US Dollar is clearly awaiting a very specific event risk - next Wednesday's FOMC rate decision - but that will not protect it from outside influences. Anticipation of that policy decision will be difficult to muster with Fed members in the blackout period before a meeting and data like the CPI update this past session offering little to force a policy shift one way or the other. While the market may be uncertain on intent, President Trump has not been shy about its expectations. He said Tuesday evening that it would be a mistake for the group to hike at its meeting next week. That won't stop that outcome, but if he truly is troubled by their efforts, he may start to consider offsets where he actually has influence - like talking the Dollar down. In contrast to the fixation of the Greenback, the New Zealand Dollar seems almost completely unburdened by its own fundamental issues. It isn't that there aren't concerns, it is instead that they seemingly hold little sway over its performance. If, however, the market does see a rebalance on speculative position as is common through the end of the year; perhaps the Kiwi's remarkable run will provide the spring board for such a corrective move. In commodities, the is little movement to be found on the key assets I keep regular track of. Gold refuses to catch any reliable traction but it should nevertheless be kept under watch should risk aversion kick in in earnest given its unique haven properties. In the meantime, silver is carving out a more reliable range pattern. In similar fashion, US crude oil has stuck to the range it has developed these past few weeks following an incredible tumble the past two months. US inventory numbers was simply not significant enough to rouse the energy product to pace, but its close cousin natural gas managed a noteworthy technical break when it cleared the lower leg of a clean wedge. We discuss all of this and more in today's Trading Video.