Sentiment never really hit a full bullish stride this past session, but it did start off on a strong footing through the US open. Though there were a host of unresolved issues across the globe, the markets were willing to ease back on the gas to allow for some much sought-after speculative drift - appropriate for the conditions this time of year. There was some fundamental weight applied to this pseudo-enthusiasm early in New York trade when rumors that negotiations between US and Chinese authorities had led to a noteworthy breakthrough from the otherwise steady state of deterioration in the superpowers' economic relationship. It was reported - and later confirmed - that China would reduce its tariff on imported US autos from 40 percent to 15 percent. If this headline was left to do its work without further commentary, speculative interests would likely done the bullish work for officials. Instead, the good will it could have earned was undermined by reports that the US was looking to condemn Beijing for hacking and economic espionage - with possible sanctions and indictments. This is something done when pressing a negotiation to a 'win' not the more appropriate compromise it will ultimately have to be. Ensuring any lingering bullish confidence was crushed, President Trump held a very public debate with the leading democrats from the Senate and the House in which he said he was ready to shut down the government if the border wall was not funded. In market terms, this resulted in another sharp gap higher for the Dow and S&P 500 to start the trading day followed by a full reversal of those short cut gains. Once again, it is important to recognize the maintenance of exceptional volatility even when the markets refuse clear direction. 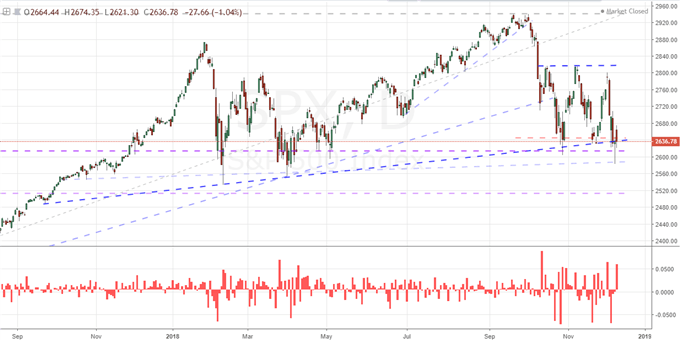 Markets are on high alert when it comes to another critical fracture in the Brexit proceedings that could ultimately prove the ultimate trigger to unrestrained panic in Europe over the regional financial stability. Following the string of maladies that lead to the Prime Minister's decision Monday to cancel the Parliamentary vote on her Brexit plan, the markets were eyeing her trip to Brussels with a healthy dose of skepticism over what she would be able to achieve. Trying to ensure a viable path that could meet both the needs of May's countrymen as well as the remaining EU members without having bounce back and forth between the two groups with little progress each trip requires regular contact and discussing the breaking terms. That said, May's most pressing work seems to be at home where neither her fellow Conservatives nor the Labour opposition are willing to back the PM's efforts which they see as giving up the benefits of membership while still holding many of the obligations. While she was out of town, the rumor mill was running on overload. Multiple news outlets reported sources suggesting enough 'letters' had been sent to raise a no confidence vote against May. As of early Asia trade, this news was not confirmed through the proper channels, but the market certainly doesn't see the threat as mere rhetoric. The chance of a confidence vote is rising quickly if polls are to believed, and such a course will generate just as much uncertainty as the push towards a no deal or any other scenario. Be careful trading the Pound as the headlines now determine market direction and intensity.

There have been a number of fundamental threats circling the Euro for some time. However, their abstract nature and the lack of immediate time frames for escalation allowed investors to simply look the other way and instead use the shared currency as a counterpart to more troubled majors. Well, that convenient substitute value is fading quickly as local issues grow more numerous and overt. Italy was already a problem for the region with the country's populist government refusing to backdown from a budget that has set spending targets that are well in excess of what the EU is willing to even entertain. The initial 2.4 percent forecast has come down supposedly to 2.0 or perhaps even 1.9 percent according to recent reports, but that is still we beyond what its counterparts' are willing to consider given the scale of Italy's debt and the austerity its more economically- and financially-troubled peers have maintained. Well, this united front of pressure on the singular profligate member has diminished further with France's Macron deciding to capitulate to protestors demands and increase fiscal support for French citizens. The EUCO meeting on Thursday and Friday willbe particularly important to keep tabs on against this backdrop. Meanwhile, the European Central Bank (ECB) decision will tap into lingering concern that the group is preternaturally late to policy cycles to render their efforts less effective. If President Draghi and his colleagues back out of tightening before it starts, those 2017 gains the currency is still holding on to will start to bleed off more quickly. 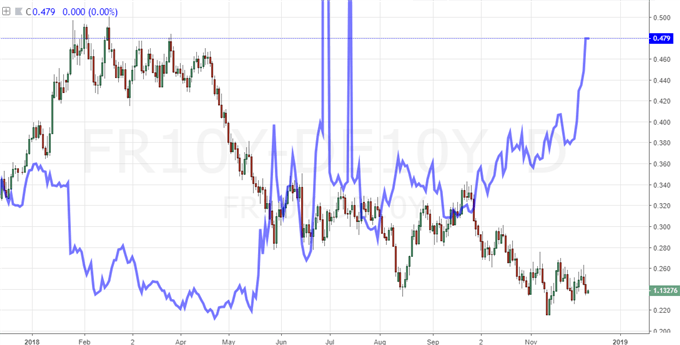 Dollar and Gold Ready to Play Benefactors, Crude Remains a Barometer, Kiwi Get Out of the Fundamental Winds

If the Euro and Pound are under steady pressure, there are few alternatives for the market to seek safe harbor. The Japanese Yen is a benefactor in risk aversion that fuels carry deleveraging even though there wasn't much carry to pursue. Another ancillary haven, the Swiss Franc, is an option but more specifically for the Euro. In a more concerted outflow of investment capital from these deep sources of speculative liquidity, the Dollar is the only truly deep end of the pool. It wouldn't be the first time the Greenback has drawn most of its strength from motivated counterparts. And, if the Dollar's own issues prove systemic enough to discourage incoming safety flows, it will be time to shift the casual observation of gold to a new gear of focus and intent for hedging purposes. Considering crude oils persistent lack of fundamental traction up through this past session - following a near-two month tumble - it is perhaps better now to evaluate the commodity as an economic signal rather than pine after it as a difficult-to-interpret trade vehicle. Such difficult should also be considered for the New Zealand Dollar. The currency has held its approximate 8 percent gains across board these past few months despite the volatility in risk trends and fade in global monetary policy views. What was particular interesting this early Wednesday were remarks by RBNZ Governor Orr who suggested the currency has been tame. We discuss all of this and more in today's Trading Video.

Scale of Haven to Risk Currencies and Assets