Was the S&P 500’s Tumble a Financial Tsunami Signal or Necessary Adjustment?

There was no mistaking the intense turn 'risk trends' took through the US session Tuesday. Already on a weak footing with a tepid European session preceding it, the American indices opened with moderate gaps lower to start their day. That was a reversal of the Monday's jump triggered by news that US President Trump and Chinese President Xi had agreed to halt further escalation of their trade war for 90 days so the superpowers could negotiate with less overbearing pressure. Given that was the motivation for the initial rally (with notably restricted follow through during the active session Monday), it should come a little surprise that the attribution of the tumble the subsequent day fell on the same fundamental shoulders. As the New York session wore on, there was a notable increase in bearish intensity that maintained pressure through much of the day. Ultimately, the S&P 500 and other key indices closed down around 3 percent - one of the worst single-day losses for the US equity market of the year. Questions over the lack of details in the US-China trade deal was one reason given for the slip - and one which Treasury Secretary Steve Mnuchin reinforced. Then there was the suggestion the US yield curve flattening - and even inverting in certain portions of the spread - was a recession signal that was stirring acute fear. However, I think the acute drop through the specific session signals something more practical - and thereby potentially more limited. The US markets will be closed Wednesday in memoriam of former US President George HW Bush. This break in the market will act to disrupt any momentum in risk aversion that may take. At the same time, the market closure against a backdrop of frequent fundamental surprises likely raised enough anxiety to encourage speculators to square their short-term, heavily-risk skewed position to avoid unforeseen disaster. In that context, the sharp decline makes sense without insinuating immediate follow through.

Ultimately, whether or not a speculative drive is roused through the thinned trading conditions of the upcoming session or even in the days following likely still depends on the collision of speculative intent and capable fundamental catalysts. The frequency of volatility bursts through 2018 and a meaningful drop in various risk assets over the period sets the tone for more systemic deleveraging. Yet, the catalyst to achieve that total capitulation has yet to be found - though we aren't lacking for candidates. On the trade war front, the US-China agreement is still being probed by market participants who are concerned Chinese officials have not confirmed the encouraging perspective of US negotiators. There is already considerable skepticism by an increasingly pessimistic investing rank that this pause will fail to yield the genuine break through that would bring its plague to an end. The drain in liquidity will help lend a temporary sense of stability to this general risk just as it will offer unique relief to the US Dollar. The Greenback took a blow this past week when Fed Chair Powell made remarks that registered as deliberate adjustment to the forward guidance mechanism. If indeed there is a strategy to acclimate the markets to a slower path of rate hikes, we would certainly have seen it in the remarks from the central banker at his Joint Economic Committee testimony in Congress Wednesday, but that meeting has been cancelled. In the meantime, the flatting yield curve from the market suggests that moderation may be permeating the market's outlook regardless. The Dollar may lack an explicit catalyst, but don't grow too confident in its capabilities with mere respite.

As we face difficulties in gaining a clear bead on risk trends and Fed policy for the Dollar, there are no questions as to the asinine convolution surrounding the Brexit situation. Already struggling to establish whether the situation is improving or worsening, further complication was added to the mix this past session. The MPs ruled Tuesday that Prime Minister Theresa May's government was in contempt of Parliament for not sharing full legal guidance on the divorce plans and proceedings. To follow up on that ruling, the body voted 321 to 299 to give itself more sway over the decision of next steps if they decided to vote down the Prime Ministers plan already agreed in principal with the EU - something that seems very likely. Given this course, the EU Court of Justice's ruling that the UK could unilaterally reverse the Brexit progress seems increasingly like a coordinated effort with an intentional end game. Meanwhile, Bank of England Governor Mark Carney spoke before Parliament defending his warnings and economic/financial assessments for different Brexit outcomes. He shot down suggestions that he was fueling hysteria and said instead that he provided the analysis that was requested of the central bank. This convoluted fundamental scenario could play out any number of ways moving forward, but until the path is clearly illuminated, it can lead to difficulty with trading the currency as it remains prone to interminable starts-and-stops.

When it comes to monetary policy, the Federal Reserve isn't the only game in town. While there are few other major central banks that could be labeled hawkish in any degree of intensity, there is always speculation of next moves to provide individual currencies with lift or retreat - and perhaps contribute an adjustment to the global influence of monetary policy on speculative appetite. The Reserve Bank of Australia (RBA) reiterated its commitment to hold course this past session - ensuring the lack of interest from a currency that was once a leading carry currency. It is increasingly speculated amongst rate watchers that the group won't start to 'normalize' until 2020 or later. In contrast, the Bank of Canada (BOC) is due to update on its own policy in the upcoming session. Unlike the RBA, Canada's policy authority is already on a hawkish path. Yet, the probability of a hike at this gathering is seen as very low. That doesn't render this event incapable of moving markets however. If the central bank's rhetoric maintains perspective of the 'second most hawkish' major central bank, the Loonie response can be significant as it has been in general retreat over thepast few months. Elsewhere, commodities are attempting their own revival - though that effort will be complicated by commitment to the next risk phase. Crude oil would be naturally troubled by a slide in markets that reflects poorly on economic activity forecasts. OPEC is due to meet soon with Qatar leaving the oligarchy and Russia a 'plus' member who is seen as a producer that may scuttle collaborative production cuts. As for gold, the haven shift is a traditionally favorable one, but conditions need to hit a particular note to fully inspire the metal. Fear that highlights the precarious lack of options by major central banks against the backdrop of their intense efforts to devalue the major currencies would do the trick. We discuss all of this and more in today's Trading Video.

Probability of Rate Hikes by Mid-2019 for Major Central Banks 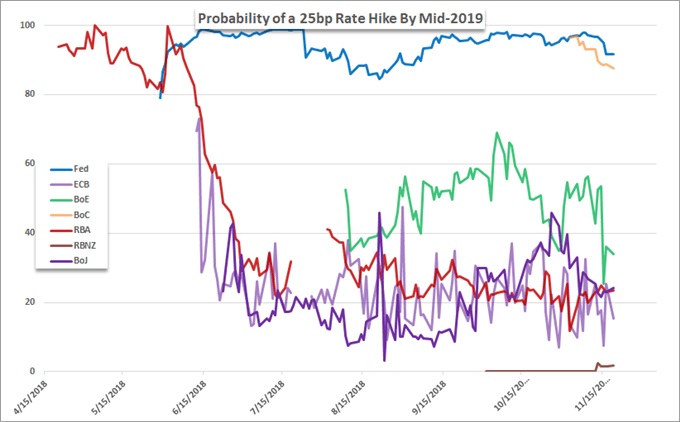