So far this week, there has been a hesitant drift higher for assets that depend on speculative appetite for lift. Yet, where there is a general course for the market, conviction remains predictably elusive. It would be a considerable risk for the wider financial markets to build up a long-risk exposure heading into this Friday-Saturday G20 meeting given the importance that is being increasingly heaped upon the event. US President Donald Trump raised the stakes this week when he hedged a tepid confidence that a deal could be struck with China to defuse the ongoing trade war by saying he did not intend to delay the increase in the tariff rate (10 to 25 percent) on the $200 billion tranche of goods at the end of the year, and that the net would spread to another $267 billion in Chinese goods if an agreement was not found. The markets have struggled to maintain their remarkable complacency in the face of this global risk, but add enough pressure and the dam will eventually collapse with a flood of other previously overlooked concerns (normalized monetary policy, lowered growth forecasts, rising deficits, etc) following in its wake. It is this backdrop against which we should gauge how much confidence an afternoon bounce in equity indices, carry and alternative asset ETFs (EEM, HYG) really deserves. That said, the reticence still seems to be working in both directions. Trump reiterated his threat to remove all subsidies to General Motors (GM) this past session for proposed use plant closures and his Apple (AAPL) tax was still being discussed in equity circles. And yet, tickers were holding fast Tuesday. 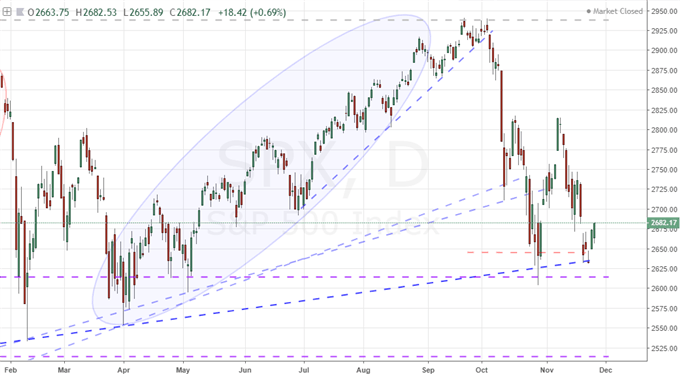 Rate Hikes are Not the Fed's Primary Monetary Policy Tool

The Federal Reserve has tightened its benchmark lending rate range by nearly 200 basis points and it has rolled off billions of assets from its bloated balance sheet. Yet, neither of these policy measures is the central bank's primary tool. That designation goes to the group's expert use of forward guidance. From the perspective of monetary authorities, the most effective implementation of policy is executing a change to money supply and other channels without generating a strong, unintended response from the financial system. Rate hikes that are surprises can trigger volatility. Sudden change in an unorthodox stimulus program can send shudders through credit. When the objective of policy in the developed world increasingly leans towards normalization - I would argue out of necessity - the central banks are swimming against the current of risk trends threatening to fracture a fragile confidence in the speculative markets. Somehow, the Fed has managed to chart its exit from extreme policy without triggering fears along the way. In a remarkable turn of events, the Fed now faces more risk in throttling back on its pace of 'gradual' rate hikes. Unexpectedly, downshifting well-established forecasts would signal a sense of concern over the future. It is this scenario that we have seen subtle hints of recently. Just this past session, new FOMC board member Clarida issued a warning that tightening too quickly could cut the economic expansion short. If there is a genuine effort to finely tune this policy tool before the December Fed decision (and updated forecasts) makes it explicitly clear, we should expect to see some tangible remarks registering intent. If there were any person that could register that level of conviction, it would Fed Chair Jerome Powell. He is due to speak in the upcoming session on bonds and the economic implications of this key market. Another stray element to this equation is the perception of the President's criticism. If it seems to the market that the Fed is bending to the government's displeasure, it could carry trouble for its perceived independence for some time to come. 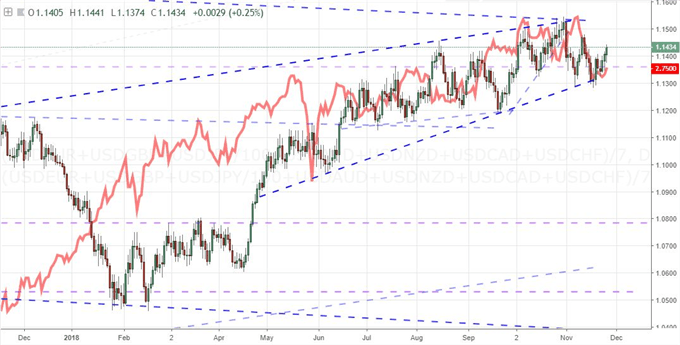 If the markets are a good barometer for the state of sentiment around critical fundamental themes, it was clear from the Sterling this past session that confidence in a workable Brexit deal had cooled significantly. The Pound dropped through the session with an equally-weighted measure of the currency dropping right back down to a range support that has firmed up over the past year. Reports from Parliament leaned heavily towards a sense of skepticism that Prime Minister Theresa May's deal that was backed by the European Union would make it through. The (likely) December 11 Parliamentary vote on the deal will prove a potentially critical date for the Pound to commit to a genuine direction. In the meantime, the US President swung his proverbial scythe through the good will of another trade partner when he suggested the trade deal could hurt UK-US trade. Ahead, the heat will be turned up on the Brexit theme - though it won't be an event that gives a decisive course setting for the uncertain future of these important relationships. Instead, the Bank of England's (BOE) financial stability report and stress test results will remind the markets of just how much economic and financial pain could result from an unsavory 'no deal' or 'crash out'. The group has made no pretense that this course will magically leave the UK unscathed but the warnings have been conveniently overlooked by the market rank thus far as there remained 'plenty of time' to make fine adjustments. This late in the game however, we find speculators are much more cognizant of poor outcomes from this gridlock. Even 'worst case scenarios' are being taken more seriously, and the MPC (Monetary Policy Committee) will not be subtle in its evaluation. The question is how closely will the market will pay attention. 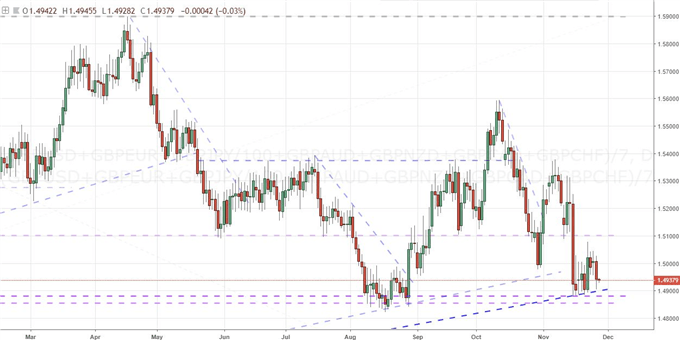 As the Dollar and Pound carve out unsteady courses, the Euro could stand in a position to take advantage of the capital flight - if not for the fact that it is struggling with its own fundamental issues. At present, the back and forth in the Italy-EU budget standoff is top concern. It seemed to start this week that there were signs of thawing between the obstinate parties. Reports of the Italian Prime Minister softening his language towards the commitment to the 2.4 percent spending to GDP budget target offered a modest hope that this existential threat to the shared currency could be resolved before it hit critical mass. And then Deputy Prime Minister Salvini stepped back in to ensure the coals under the conflict were maintained. There are few definitive dates to countdown to on this theme, but there are explicit milestones towards a critical monetary policy update for the ECB. Ahead, we have the Euro-area sentiment surveys (the Italian versions were concerning) and Friday brings the central bank's critical duo in CPI and unemployment. Receiving far less fanfare, the New Zealand Dollar is holding steady after its multi-month rally and this morning's Reserve Bank of New Zealand (RBNZ) financial stability report. The central bank struck a notably more optimistic tone over its assessment of domestic issues but it was still voicing concern over growing global risks - such as trade wars. The Kiwi remains a currency that defies conventional fundamentals which is an unusual state of affairs for markets of late. If we wanted to take that disconnect to the extreme, crude oil remains the most divergent market amongst the major asset classes. While the commodity has spent the past few days consolidating the most recent leg of its extended tumble (Friday's 7 percent drop), the course is still firmly set to the bears. The market will eventually find a bottom, especially after such a dramatic drop in price and net long speculative positioning. And yet, it doesn't have to happen immediately or on the basis of typical events like the OPEC meeting coming up. We discuss all of this and more in today's Trading Video. 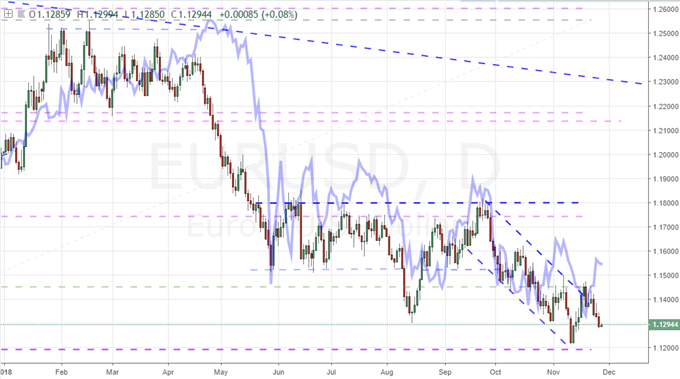