There was another modest break in the trade war clouds this past session, but pulling up slightly from a global growth nose dive doesn't seem to excite speculative appetites like it once did. After weeks of escalating tensions between the United States and China, United States and the EU, the United States and NAFTA members among others; there was finally a modicum of respite. Reports ran the headlines that President Trump would not push forward with the most aggressive actions against China when it came to limiting the country's investment in the American technology sector. The market is starting to gain serious concern amid the 'two steps forward, one step back' approach to negotiations the US is favoring. The fact that the world is not following the fastest track towards a breakdown in trade relationships does not absolve the fact that we are seeing barriers erected while capital benchmarks are still within close reach of record highs that long defied the pull of fundamentals. With President Trump's threat of a 20 percent tariff on European autos, his warning of a $200 billion tariff bill escalation on China and calling out US corporations for responding to the trade wars (like Harley-Davidson), it is clear that enthusiasm has to be filtered through stricter fundamental reviews. 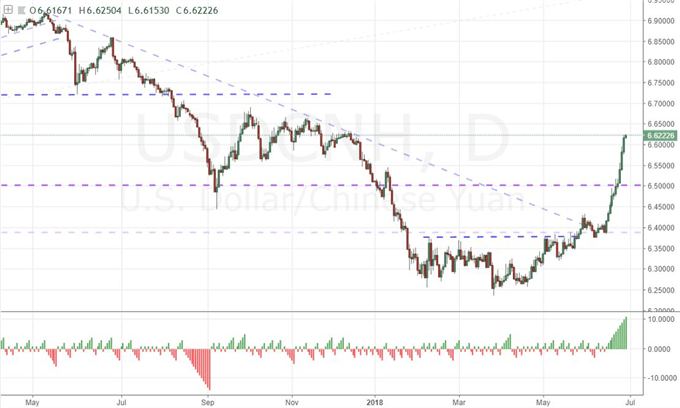 When the headlines around the United States' easing off the most intensive threats against China were fresh, there was some speculative recovery showing through the capital markets. While equities trading in the Asia session Wednesday was somewhat uneven, there was a more uniform and robust bid behind benchmarks in the European market from the likes of the DAX, FTSE MIB and FTSE 100. Even the opening moves of the US torchbearers was commanded by the bulls. The Dow seemed to be making another effort to turn two weeks of retreat and the S&P 500 was pressuring short-term resistance. That effort fell apart dramatically before we even reached the afternoon transition. All the major indices shifted from a tepid bullish day into a sharp decline. The Dow stood out for its large 'upper wick' (or 'upside tail') secured through the intraday turn while the tech-heavy Nasdaq extended its retreat from a much higher starting point. There was similar struggle outside the world of shares with the EEM emerging market ETF, Yen-based carry trades and benchmark 10-year Treasury yield all showing the pressure of fading confidence. The danger that traders should continue to monitor is whether speculative retreat turns into outright fear and a vicious cycle of deleveraging. Monitoring performance through sessions and across markets while key fundamental developments are made will be crucial to responding quickly and appropriately. 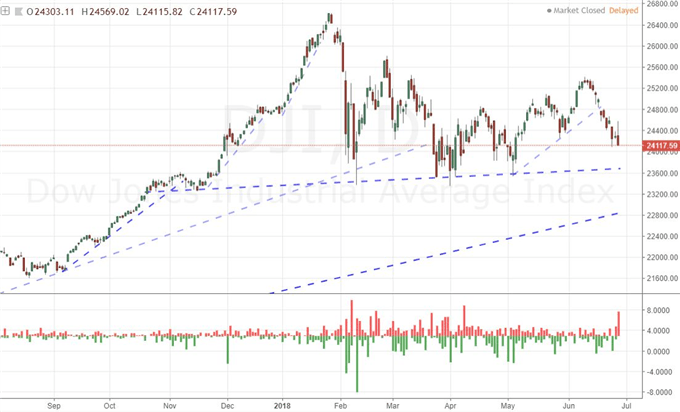 EURUSD Levels Up to Support with a Busy Session Ahead

Is it remarkable that the Dollar has recovered ground this past session to trade near its highest levels in months given that risk trends have faltered or despite that fact? Historically, the Greenback is a safe haven owing to its unmatched liquidity; but circumstances are such in this environment that much of the uncertainty emanates from the US and the concern that it will steadily lose its top reserve status. With the President pushing trade wars against global counterparts and threatening local corporations that respond to it for protecting profit, the Dollar's appeal for constantly remain under review. In the upcoming session, we will put the US corporate sector and broader risk trends to the test as the Fed's CCAR stress test results on the largest banks are due. Typically, the financial institutions release their dividend and buyback plans after these results are released. For the Euro's part, the fundamental question pressure is even more nuanced. The Euro is facing more pressure than just the United States' tariffs on its metals and possibly autos. Domestically, the political threat from Italy is spreading to Germany amid migration outcry. That will certainly come up in the EU Leaders' two-day meeting as will Brexit and trade war with the United States. Eurozone sentiment readings along with Italian confidence readings and the Bank of Italy's 1Q credit conditions will be noteworthy event risk. 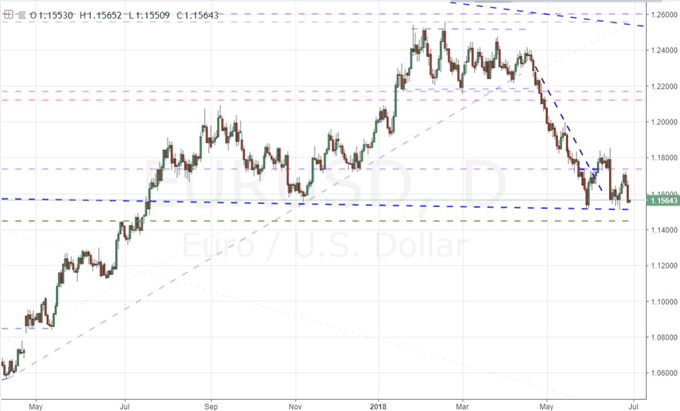 Brexit for the Pound, Poloz Supports Loonie, Oil Closes at a Multi-Year High

Given the full influence of a few dominant themes and the louder groaning in risk trends, it is clear where the market's focus will be held. Yet, that won't prevent short-term volatility for certain currencies and markets were targeted event risk pops up. Brexit isn't a timed event on the docket that will give clear resolve for a persistent trend. This past session, BoE Governor Carney reiterated his concerns over the fallout from the UK's divorce from the EU in his presentation of financial risks. Pressure from the EU around a 'no deal' outcome and UK business group's issuing regular warnings boosts the risk in this event's eventual conclusion - even if the Sterling isn't tracing out a steady decline. This morning, the RBNZ held rates at its policy gathering; but the more influential event was BoC Governor Poloz's hawkish lean in commentary. After another round of substantial depreciation amid escalating trade wars, the Loonie is in a good position to recover. CADCHF and USDCAD top my list of interesting crosses, but the latter certainly needs to register a Dollar retreat first. Outside currencies, US-based WTI crude attempted to draw in traders' attention once again. The commodity extended its charge higher to post its highest close since November 2014. Once again, we need to put the appeal of a large technical break against the struggle this market has with turning genuine trends. We discuss all of this and more in today's Trading Video. 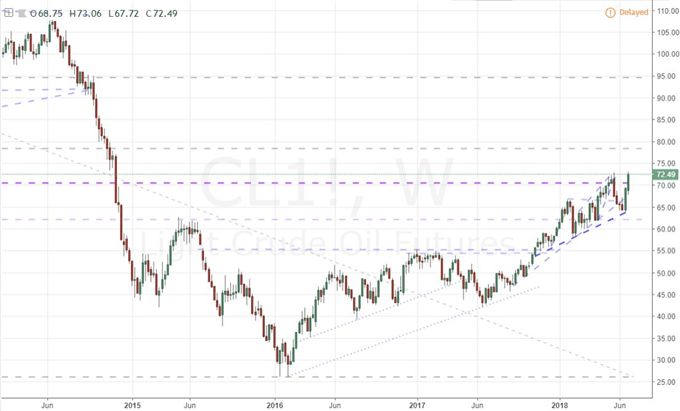