A Charge for FANG, Rebound for the Dow and More Uneven Performance Across 'Risk'

There was a rebound in speculative sentiment this past week, but the intensity registered depends on which benchmark you reference. The peak of technical standing falls to the leader of the speculative charge over the past few years: the FANG (or FAANG). The composite of massive market cap tech firms returned to its record high this past week and eased some of the disappointment that clung to the market after the tepid response to a robust 1Q earnings season. Zooming out a little, to the Nasdaq, the index has outpaced many of its peers; but its progress falls well short of a return to the record high set earlier in the year. For the bluechip Dow Average, a 7 consecutive day rally doesn't translate into much progress in absolving the losses suffered in February. The best measure of an underlying sentiment theme is an observation of the convergence or divergence of risk assets across the world and asset class. On this front, we have seen a return of balance not a meaningful recovery effort. Shorter duration trades with more reasonable targets and exposure are still the way to go in these markets. 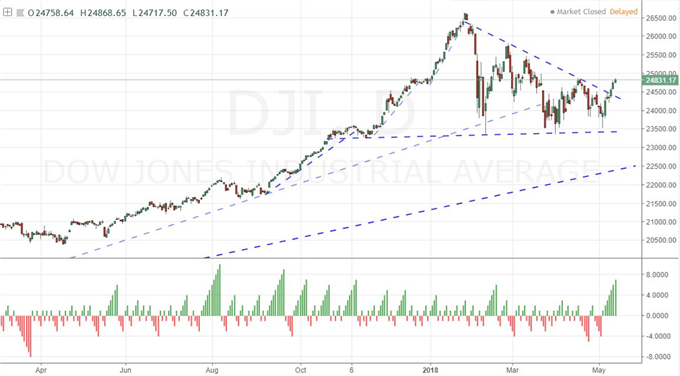 Though its move was not the most aggressive amongst the majors, the US Dollar's recovery these past four weeks carries more profound weight for the entire financial system. As a measure of risk trends, monetary policy and unique political risk, there is sense of uncertainty as to where conviction is leaning for the financial system. However, the speculative interest behind rebalancing extended moves that run counter to traditional fundamental trends can prove its own remarkable force. Yet, the absence of a tangible driver for which we can qualify whether it is under power or not opens the currency to flagging momentum with little in the way of explicit fundamental catalyst. The DXY Index slipped the final two days of the past week - hardly a clear signal of reversal but certainly marring a trend that was heavily dependent on speculative momentum. With the pullback, traders will look more closely at what is motivating the correction and what previously offered it lift. A rebalance of a bloated net short speculative Dollar position can mount a meaningful wave; but it doesn't demand momentum and is readily sidetracked by light scrutiny. It is too early to call reversal, but it isn't unreasonable to question momentum. 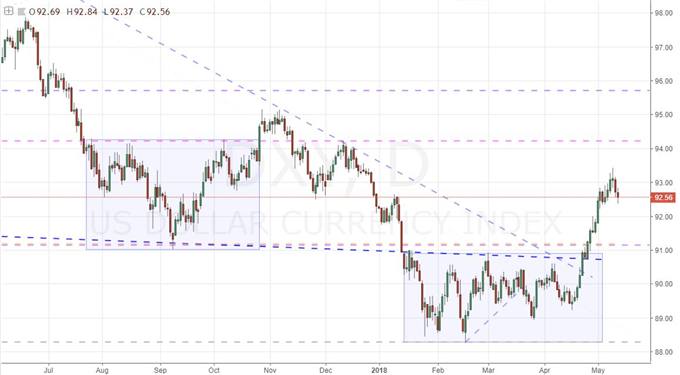 The past weeks have seen some remarkable moves among some majors - some without tangible fundamental drive and some without. For the Sterling, the motivation over the past month has been the obvious souring of interest rate expectations and the tone surrounding the Brexit negotiations. The Pound has suffered for the recognition of modest troubles more than the intensity of the fundamental downshift itself. That should be considered against the breadth of the currency's slide and the technical barriers faced by GBP/USD, EUR/GBP and GBP/JPY. From the Canadian Dollar, sentiment seems to swing from one extreme to the opposite. From an over-extended bearish run, we now find the Loonie has run an impressive recover that seems to outpace its practical outlook for interest rates and trade negotiations. Pairs like EUR/CAD can play both ways, but one-sided moves can prompt an imbalance of opportunity. Then there is the Australian Dollar which has stretched to lows with less and less drive behind the slide. A tentative bounce ended out the past week with little data to prompt it and few milestones to progress through ahead. Like many other pairs, its progress may arise more from a speculative pendulum swing than a clear fundamental spark. 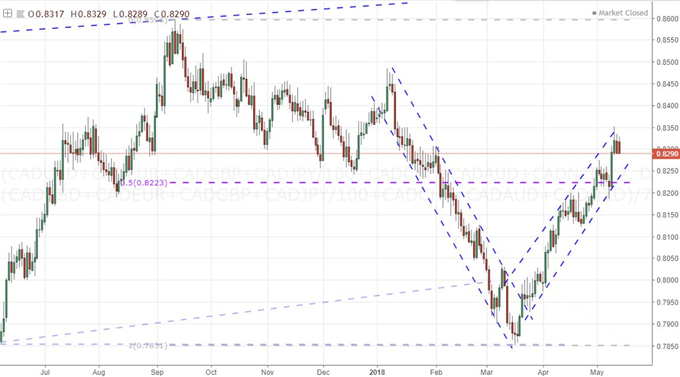 Emphasize Key Technicals or Pacing for Oil and Bitcoin?

Technicals draw us in, but fundamentals should be what keeps us. We have seen some noteworthy turns and breaks on technical levels across the FX market, but it is our appreciation of the drive behind these currencies and pairs where we derive expectations for meaningful trades. The same is true of other markets. From US oil this past week, we cleared $70.50 - the midpoint to the 2011-2016 range - as fallout from the United States' withdrawal from the Iran nuclear deal ripples through the market. Yet, hitting the next high has not ensured momentum. The same stop-and-start price action has persisted. The same is true of Bitcoin. The most popular cryptocurrency hit the midpoint to its historical range at 10,000 and took to retreat. The turn was clear, but that alone hasn't ensured momentum with stories like the investigation into another exchange cutting only surface deep. We discuss not only the technical and fundamental opportunities staged in the markets but the importance of motivation and pace in this weekend Trading Video.