The risk-on drive is throwing out further evidence that it may be cresting. Not only is the pace of climb for the benchmarks like the S&P 500 fizzling; but some sentiment-drive assets have actually slipped and volume's early undermining effort to the initial climb is moving to the forefront. Looking more sharply at the growing contrast, we have the S&P 500 and Nasdaq 100 which each closed out their sixth consecutive session of advance. Yet, the volume behind these moves (via ETFs since that seems to be the favorite outlet nowadays) continued to fade just as progress through the indices price growing negligible. A mix of modest gains and losses on the day for global equity favorites (DAX, FTSE 100, Nikkei 225, FXI), junk bonds and emerging markets all offer the impression that that what conviction there may have been with the start of a New Year seems to be spent. Ultimately, the VIX remains one of the most tell-tale barometers of our financial condition with its anchor firmly to unprecedented low levels that fool no one into thinking it is anything other than complacency.

One risk-asset that is typical in my collective evaluation that was left out was carry trade. I prefer to reference the Yen crosses for their consistency in this role, and there was a collective rise from the Japanese currency this past session. That was one of the strong 'risk off' moves on the day if indeed it reflected that. Yet, there was another speculative theme attached to the Yen this past session - the possibility that the BoJ is preparing to change stance on its record-breaking stimulus effort. That carries serious implications for Japan and its currency, clearly; but it also would represent a critical change for the global financial system. The BoJ is the last of the major central banks to commit whole heartedly to the full-tilt easing program. Yet, that effort will have to end eventually. The instigation for this speculation was a shift in monthly purchases that may simply be a technical adjustment; but then again, the end is inevitable. Whether you trade FX, equities, fixed income or something else in the East or West; you'd do well to keep tabs on this. Could this news also have been the genesis of the drop in US Treasuries that pushed the 10-year yield above 2.50%? Perhaps, but the global rise in bond yields has not been so sensitive to such speculation. There has been technical and fundamental pressure building behind sovereign debt for some time, and we are not yet in a position to call a clear and sustained turn.

Meanwhile, the more measured implications for some of the majors seems to notch technical milestones but not yet genuine conviction. The Dollar edged out another gain with EUR/USD slipping a little further. There is no intensity to either individual currency's effort nor in the pair; so I have not jumped on the technical progress. However, if something further lights a fire under the Greenback, this is not the only outlet. Keep tabs on the GBP/USD's range, the AUD/USD reversal run after its 13-day advance and USD/JPY's dense technical offerings. For the Pound, the discussion on both sides of possible preparations for a 'no deal' outcome has frayed nerves but not speculative hold out. Dollar-priced commodities offered a divergence in direction with Gold's steady advance starting to threaten reversal while US oil prices have clear $62 - and thereby 2015's swing high and a historical Fibonacci level. Cryptocurrency maintained an unprecedented level of volatility, but the real highlight was perhaps some recognition of the mania in the space with Kodak announcing its pivot into blockchain and the surge that triggered in the firm's shares - despite the lack of clarity as to how the company intends to make revenue out of this venture. We discuss all of this and more in today's Trading Video. 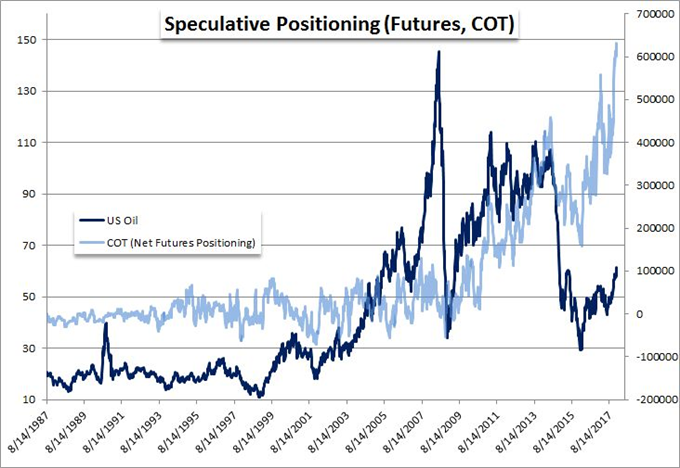 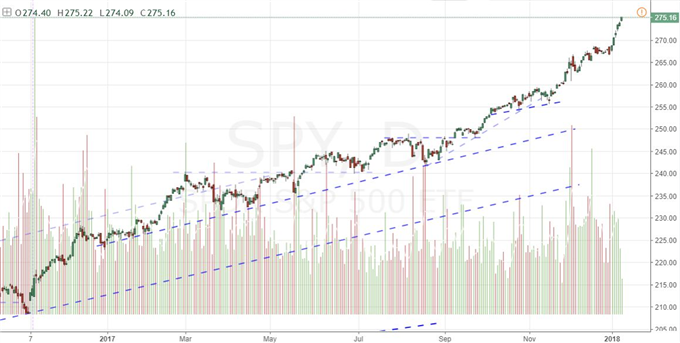 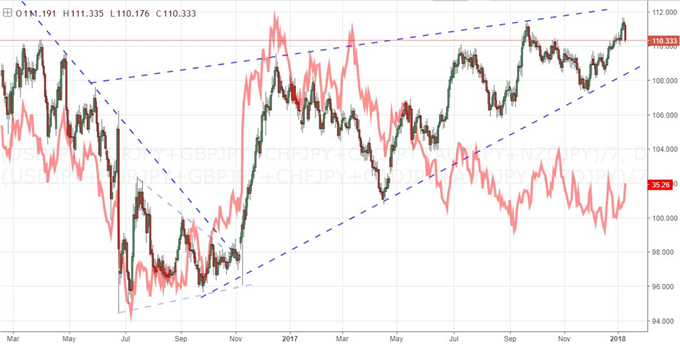