The return of US liquidity after the extended holiday weekend amplified would do little to put speculators' confidence back in the driver seat. Weekend headlines of North Korea's hydrogen bomb test and persistent provocative language held over for an impact on US markets. US equities led by the S&P 500 dove for the first active trading day of week and the transitional period often considered the seasonal pivot from 'Summer Doldrums.' A similar 'risk' response was measured by the VIX volatility measure which surged higher. It Over the past month, the increased frequency in bouts of fear seems to come in one of two forms: uncertainty surrounding the posturing around North Korea or political logjam in US markets. The approach of the US debt ceiling was clearly another risk on the markets mind.

Though they may carry some unique risks given the focus of the Korean tensions with the United States, the Dollar and Treasuries are would normally play the roles of safe havens everything else being equal. But the circumstances are not balanced outside of that spat. The world's largest economy is once again marching towards the financial cliff, and global investors are growing as wary of the brinkmanship as rating agencies. If this end-of-month deadline were not a threat, the Dollar may very well have started its recovery - as there is only so much discount that can be leached from the currency given its yield advantage. Alas, that clock continues to count and the markets show their concern with - among other evidence - a $20 billion auction of 1-month Treasury bills drawing the highest yield since the Great Financial Crisis (2008). Risk trends will continue to pose the greatest existential threat to the broader financial system, and the possible catalysts to see it falter remain diverse.

In the meantime, the monetary policy theme will continue to march forward as a market mover with scheduled event risk to stir key currencies. This past session, the Reserve Bank of Australia (RBA) announced that it had held rates unchanged and offered little guidance for when they will eventually alter course. The response from the Aussie Dollar was understandably restrained, but AUD/NZD conditions staged a more remarkable technical position. The Canadian Dollar will not likely escape so unscathed. Swaps markets are pricing a 44 percent chance of a hike at this meeting - to add to July's 25 bp increase - and the currency has stretched aggressively these past three months. Among its many pairs, the NZD/CAD and AUD/CAD look to be the best suited to a 'dovish' and 'hawkish' outcome respectively. And, of course, we should not forget that the ECB's decision is just over the horizon Thursday with far greater global influence that the policy meetings over the past month.

Outside the FX world, there have been a swell in volatility for other markets. In commodities, gold continues to gain traction as the soundness of the Dollar's haven appeal diminishes amid episodes of risk aversion. Oil has also seen a bounce as refineries come back online following Hurricane Harvey and ahead of Hurricane Irma. In the cryptocurrency universe, the news of China's ban as well as South Korea's escalated regulation seems to have been processed without a second day of momentous selling. The likes of Bitcoin, Ethereum and Ripple all recovered some - but not all - of the ground lost Monday. And, speaking of China, the under-the-radar (my radar) acceleration of USD/CNH seems to finally be pulling out of its dive. Is this a designed move? We discuss all of this for navigating the markets in today's Trading Video. 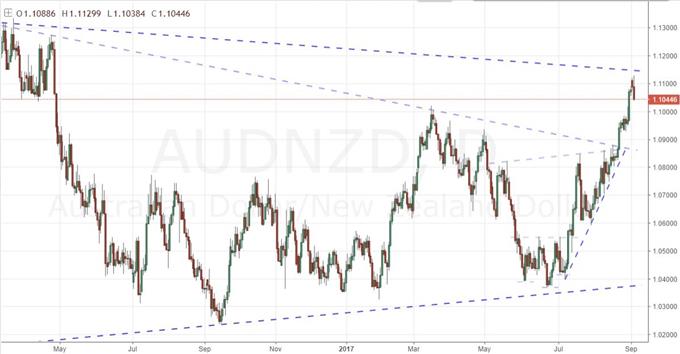