See how retail traders are positioning in key Euro, Yen and Australian Dollar crosses on an intraday basis using the DailyFX speculative positioning data on the sentiment page.

Monetary policy remains a key theme for the financial system and the FX market in particular. However, the focus is increasingly moving away from the Fed and its first mover status with rate hikes - and now balance sheet scheming - and more on those doves that are contemplating a possible season change. This past session, traders weighed in on the policies of the two most dovish major central banks. Both kept their commitment to easy policy, but the reaction from the markets to each was very different. From the European Central Bank (ECB), no change to the suite of rates nor to the current policy of monthly stimulus purchases was offered. No surprise there. But the statement and presser remarks by President Draghi did look to create shoulder room. Rather than commit to the step that lays out the first actual tightening step though, the central banker said further asset purchases were possible while also suggesting that the group would likely revisit its discussion of winding down in the fall.

From the Euro's response, we can see how this attempt at fence sitting was interpreted. The currency was generally one of the best performing currencies of the session and EUR/USD specifically charged to a two-and-a-half year high. The question is how much more run does this second largest currency have in the near term? We are hitting critical technical bounds on the world's most important pair and the ECB hasn't delivered the conviction speculators who have been riding the early adopter hawkish wave were looking for. There are a range Euro crosses that can present trade opportunity one way or the other, but EUR/USD is the most important of the pairs and EUR/CHF should also be viewed as a barometer to the Euro's own influence. Meanwhile, the Bank of Japan (BoJ) also held its course, upgraded its GDP forecast but lowered its inflation expectations. Given the focus for this group is reaching an inflation objective, the outcome cements the perception that the BoJ will hold fast to the most extreme dovish position among the majors. That said, this position does not easily afford the Yen crosses more lift as the currency itself is not easily devalued as it was in the past. Japanese authorities are putting to the test the assertion that monetary policy is quickly losing its effectiveness and moreover is turning into a threat in future economic and financial tremors.

While they did not have an event with the same kind of headline impact as the ECB and BoJ rate decisions, the Australian and New Zealand Dollars were similarly motivated by monetary policy speculation. The Kiwi Dollar has rallied modestly as speculation that the carry currencies would be starting to gear up for hikes to preserve their place in the spectrum received a much-needed boost by the country's Finance Minister. Steven Joyce suggested the Kiwi's strength reflected confidence in the economy and that local businesses were adjusting to its climb is political speak that can perhaps be interpreted as a signal of approval for the central bank to move. Pairs like NZD/JPY, NZD/CAD and GBP/NZD should be watched closely. In contrast, RBA member Guy Debelle looked to throttle the Aussie's rally of late by suggesting that the neutral rate of 3.50 percent the minutes referenced would be lower for longer while taking time to reach. AUD/USD reversed course but still holds above the critical break point at 0.7850. Other crosses to keep tabs are AUD/JPY and AUD/NZ. Finally, favored cryptocurrency Bitcoin exploded higher Thursday as the August 1 deadline for the stand off over the next direction taken to improve scalability for the blockchain seems to be moving more and more to a clear resolution. The BTC/USD rally was the biggest since 2013 around the time appetite was fulled for a vehicle to circumvent capital controls in Cyprus. We discuss all of this - and more important its tradability - in today's Trading Video. 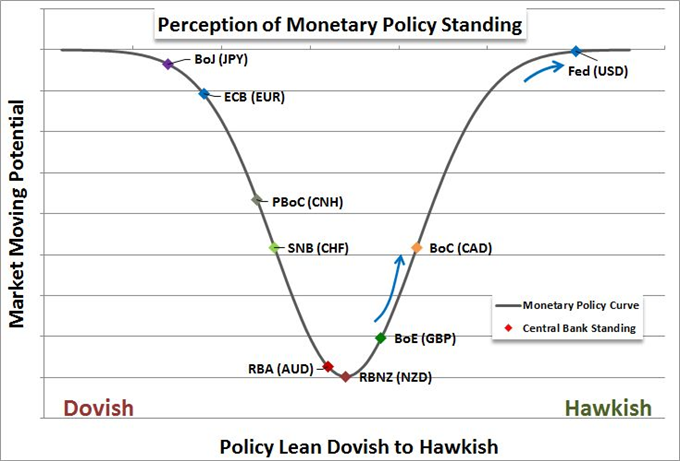 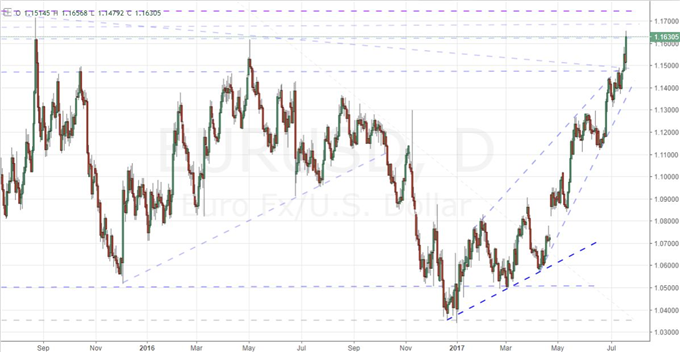