Global equities are in varying states of optimism with economic growth, revenues and speculative dependency shifting weight in the responsibility for the market's drive. Where will stocks head in the third quarter? Read the DailyFX forecast to see our view.

If correlation where the gauge of conviction, the market's opened to a roaring sense of speculative appetite to start the week. That said, progress and momentum count for much when judging the appetites of the market - and on that front, Monday's sessions were left woefully wanting. Looking at the technical progress of the range of 'risk' markets I monitor on a regular basis; it was clear that the developments were more oriented towards following the path of least resistance to put off any critical commitments to market direction. Looking at the headlines we had to start this week off with as well as the gravity of Wednesday's Humphrey-Hawkins testimony from Fed Chair Yellen, it comes as little surprise that traders would defer serious decision making. That said, there was still crucial, underlying fodder to consider.

The weekend's G20 meeting ended with a communique that further made tangible the concerns that have been building up over the months. Absent in this official wrap up was the commitment by the group's members to avoid protectionist policies that would detract from collaborate growth in a bid to draw performance at the detriment of trade partners. This was standard fare for years as the danger of competitive policies that found major players chasing each other to the bottom was too troubling to even consider. Yet, the anti-globalization turn has gained clear traction in the past 12 months, and this certainly shows it. Not only does this pose deeper trouble for the global economy and financial markets, but it is also a concentrated risk for the US Dollar as its unique status fades - even just at the margins. The US was also on the negative side of the OECD's evaluations with the periodic update of economic indicators the group runs. The United States, United Kingdom, Italy and Russia all saw their forecasts downgraded; while China and France received upgrades. Rounding out the evaluations for the US and Dollar on the day, the NY Fed released its consumer survey for last month with upgrades to consumer's financial assessments, spending plans and three-year inflation forecasts.

Trading equities, EUR/USD or anything Dollar based now - whether explicitly or unintended - would be to take a view on the outcome of Wednesday's testimony from Fed Chairwoman Janet Yellen. Either this event will systemically impact the world's largest currency and general market sentiment or it won't. But traders should take the time to weight the risks and potential reward from making an assumption. In the meantime, there are opportunities that may have fewer competing themes for attentions or scenarios to complicate trading plans. The Yen crosses in particular are interesting. BoJ Governor Kuroda redoubled his commitment to extreme dovish policy Monday morning with a very modest response from USD/JPY and the other Yen crosses. Given the maturity and saturation of extreme easing, the half life of such commitments has been reduced to hours - if that. If risk trends do not conflict, a range of these crosses may offer appealing technical and conditional opportunities. While USD/JPY can be somewhat complicated; the setups for EUR/JPY, GBP/JPY, NZD/JPY and CAD/JPY are appealing on a number of levels. Elsewhere, the cryptocurerncy leaders - Bitcoin and Etherium - continue to draw negative attention on extended bear runs while commodities are back in the news with Oil retesting 44. We discuss the anxiety building in the market against restraints of anticipation in today's Trading Video. 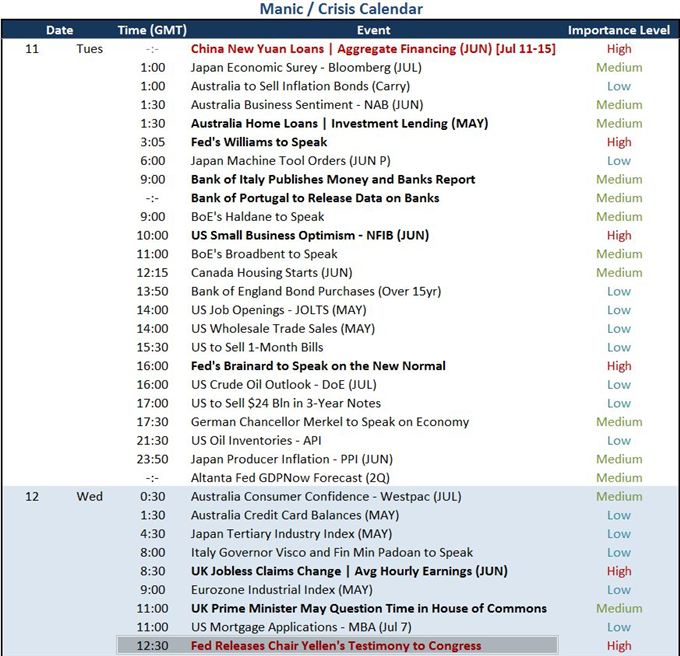 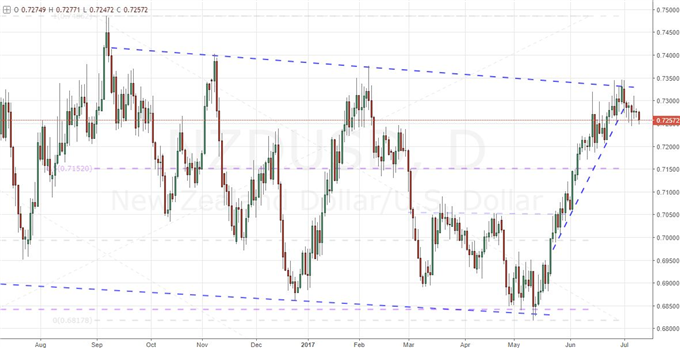 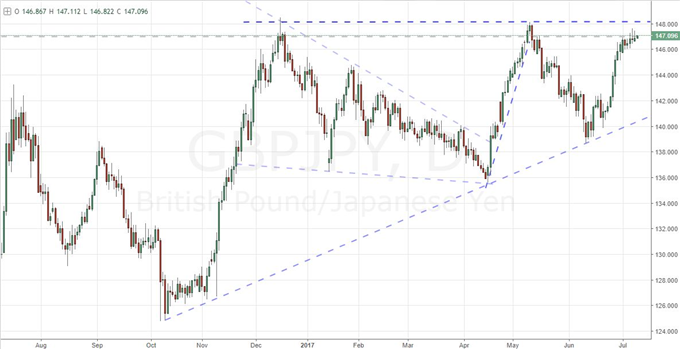