Last week, gold posted a nasty turnabout, forming what I referred to as a “death needle” – a large reversal candlestick that positions for bearish price action. It was also noted at that time we would likely see some backing-and-filling versus an outright sharp decline.

So far, we have seen price behave in anticipated manner, and expect more of this to come in the weeks ahead as the digestion phase runs its course. Any rallies from here appear at high risk of failing, even if they initially appear to hold strong momentum.

Not only does last week’s strong reversal highlight exhaustion, but it came around the all-important zone of resistance formed during the 2011/12 topping process. The knife through and swift rejection last Wednesday show just how important this zone is. It was a problem late summer, it’s a problem now.

But this doesn’t mean gold is doomed, it just means it needs more time to continue to make good on the run its been on since 2018. A few weeks of building up power again would do gold some good for seeing its way on through to the 1600s and higher in firm fashion.

For now, sideways appears the best-case scenario, with potential to decline down towards the trend-line from May, currently near 1500. A decline to that point could end up providing a solid risk/reward entry for those who are patient. 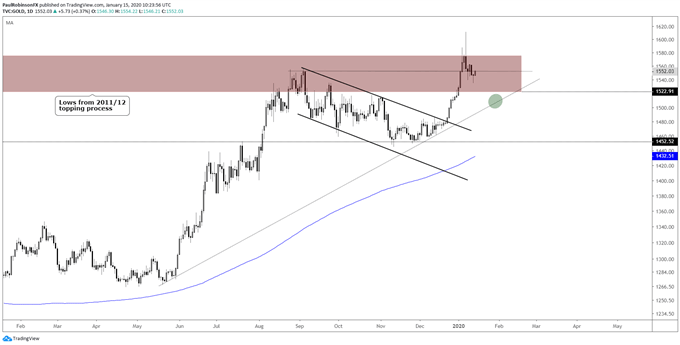