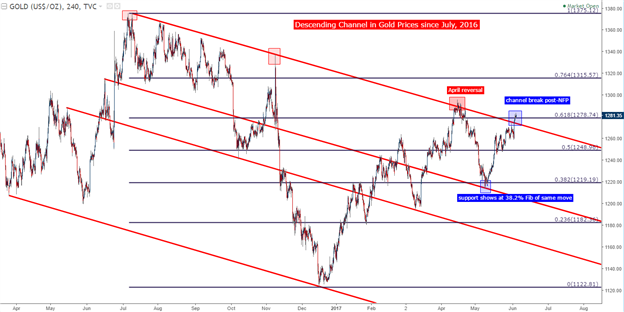 - Gold prices put in a bullish break after Friday’s Non-Farm Payrolls report; but a series of market drivers over the next two weeks will likely keep Gold prices on the move.

In our last article, we looked at the continued bullish run in Gold prices after another ‘higher-low’ point of support was set. But we also looked at a longer-term descending channel that may have offered some element of pause to the continued topside run, as the resistance trend-line of this channel had helped to turn around another strong, bullish move in mid-April.

As Non-Farm Payrolls came-in below expectations on Friday, another wave of USD-weakness hit global markets, and this catapulted Gold prices beyond this trend-line, and right into the 61.8% Fibonacci retracement of the most recent major bearish move (taking the July 2016 high down to the December 2016 low). This set of retracement levels is relevant, as the 38.2% retracement of that same move is what helped Gold prices to find support in early-May after the mid-April reversal. 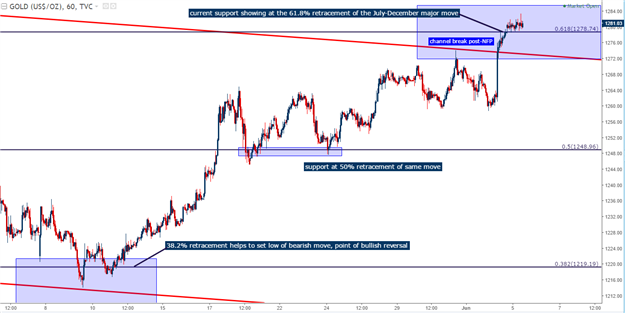 After price action burst-above the descending trend-line on Friday, prices trickled-higher until, eventually, they ran into this Fibonacci resistance at $1,278.74. Price action closed the week nestled just underneath this resistance area, only to re-open this week above, with support now showing at that prior level of resistance.

Given the veracity of the recent bullish move, and also considering the bullish break of the longer-term descending channel, traders would likely want to move forward with a bullish bias here. For those looking at bearish strategies, they’d probably want to wait until a bearish break of support at $1,278, at the very least, before looking to press down-side strategies.

The complication in lining up longer-term bullish setups at the moment would arise from the fact that the next two weeks present a significant amount of headline risk; and as has become usual with these types of macro-drivers, this will probably bring some continued volatility in Gold prices. This can also be opportunistic for gold bulls, as a down-side reaction in Gold prices to any of the upcoming drivers could bring on support that could open the door for bullish entries. The area around $1,274 could be particularly compelling for such an approach, as this is a prior swing-high that has yet to see any nearby support tests. Just below this level is another prior resistance swing around $1,269 that could be utilized as an ‘s2’ zone of support for bullish continuation plays. And between these two levels, we have the projection of that prior descending trend-line, and this could be usable as well as an example of ‘prior resistance helping to set new support’ in a burgeoning up-trend. 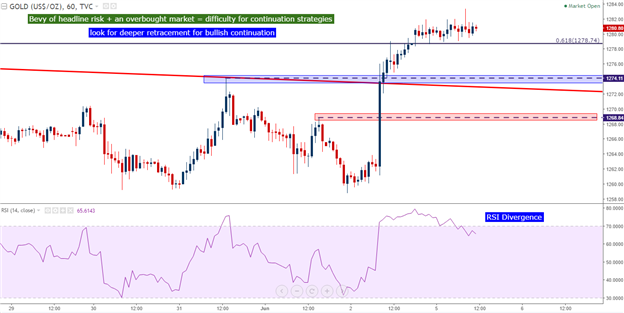