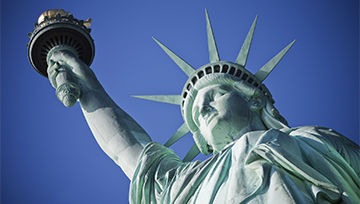 - May Non-Farm Payroll numbers came in below-expectations, with negative revisions for both April and March. Average hourly earnings increased by .2% for an annualized rate of 2.5%.

- This has created another gust of weakness in the Greenback, and with a very busy next couple of weeks, we can certainly see volatility around this theme hasten.

This morning saw the release of the last NFP report before the Fed goes into their two-day policy meeting on June 13th/14th. The headline number missed, printing at +138k versus the expectation of +182k. April NFP was revised-lower to +174k while March was revised down by -29k for a finalized total of +50k. Average hourly earnings were up .2% in the month of May, bringing the annualized total to 2.5%. So, while this morning’s numbers aren’t great by any stretch, this is likely not enough to derail the Fed’s rate hike plans for the middle of June. A hike is largely expected at that meeting, and given the bank’s prior stance towards slower data being ‘transitory’, this morning’s NFP miss may not have done enough to alter those rate hike plans. For its part, the U.S. Dollar has stayed incredibly weak since the middle of May, and this hastened after this morning’s NFP print as DXY moved down to set another fresh six-month low. 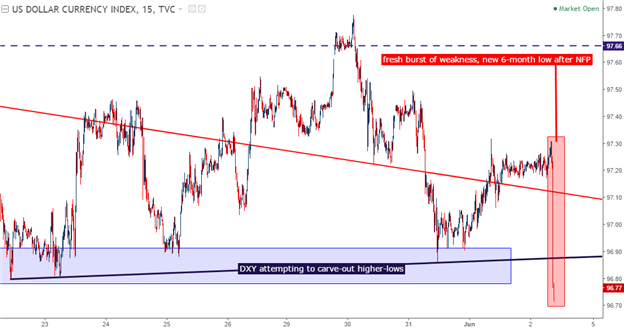 Next Week’s Calendar is Loaded with Event Risk:

Looking ahead to next week: The economic calendar is fairly full and there are a couple of pivotal non-data related events to watch out for. Thursday of next week should be especially brisk, as we have the European Central Bank rate decision in the morning, followed by the James Comey testimony in front of the Senate Intelligence Committee at 10AM ET, and the U.K. will be going to the polls throughout the day for early general elections. And in the week after, we have a Federal Reserve meeting where expectations are high for another hike from the Fed. This flurry of events can keep volatility high in Euro, GBP, and USD; and we’ll likely see markets attempting to price-in any anticipation ahead of time, much like we saw with this week’s GBP sell-off after a Yougov poll showed that Theresa May’s Tories may not garner the supermajority that she had originally hoped.

Before we get to that really busy Thursday, we’ll have a RBA rate decision to work with on Monday night (Tuesday morning in Asia). There is scant expectation for a move from the RBA here, but more interesting, as has become usual at these meetings, will be comments around Real Estate prices and Macroprudential policy. Australia is currently looking at some of their slowest growth metrics since the Financial Collapse, and with growth continuing to decelerate, calls for interest rate cuts have begun to grow louder. But there’s a concern on the other side of the argument: Real estate prices. Real estate prices throughout Australia remain elevated, so much so that just last week, pretty much all Australian financial institutions saw a credit downgrade from Standard & Poors as the rating agency warned of risks around elevated property values.

So the RBA is in a tough spot here. They’d probably like to cut rates to stoke growth numbers; but doing so would entail a greater risk of even-more elevated property values that could very much worsen the situation that S&P was warning of last week. Likely, we’ll hear the RBA attempt to ‘talk down’ the value of the Aussie by saying that rate cuts could be in order or that the bank has some room to move rates-lower, while also buttressing this statement with comments around macro prudential policy measures that could possibly be implemented to address the issue of elevated real estate values in Australia. 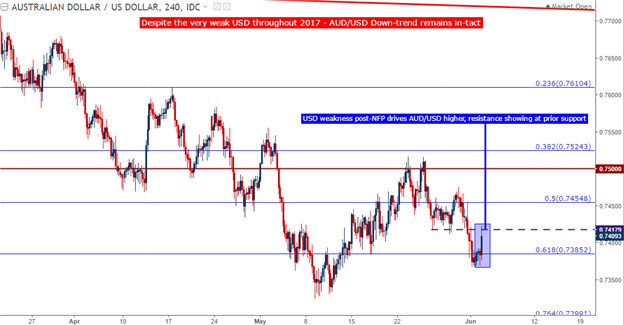 There is a tug-of-war in European economics at the moment. The big question is the lifespan of QE as signs of recovery continue to show throughout Europe. As recovery has further taken hold, many states in Northern Europe have seen some element of inflation return while employment is relatively healthy. Some of these areas, particularly Germany, have fears of over-heating their economies by driving asset prices even-higher while areas like wage growth and inflation have difficulty keeping up. Meanwhile, many states in Southern Europe appear to be at a far less-mature stage of recovery, with some areas still seeing unemployment numbers > 10% and many of these areas would prefer continued QE to further drive liquidity into their economies.

Up to this point, Mario Draghi and the ECB have been dismissive of the idea of tapering or ending QE. At the most recent ECB meeting, Mr. Draghi summarily dismissed the idea by saying that the bank had not even discussed exit strategies. This provided a quick dose of weakness to EUR/USD, but that was short-lived as buyers stepped-in shortly after to solidify support around 1.0850. Since then – even more demand has taken over as EUR/USD has punched-higher by four big figures, and the pair continues to test resistance around the 1.1250-1.1265 area.

The big question for next week’s ECB meeting is whether the bank’s stance has changed, and whether they will open up to the prospect of exiting stimulus. Any such announcements could drive further strength in the Euro has investors attempt to get in front of any potential taper announcement that may follow. If the ECB does not discuss exit strategies, or firmly denies that they have, much as what we saw at the last ECB meeting, this could be a ‘buy the dip’ setup for traders looking at continued strength. 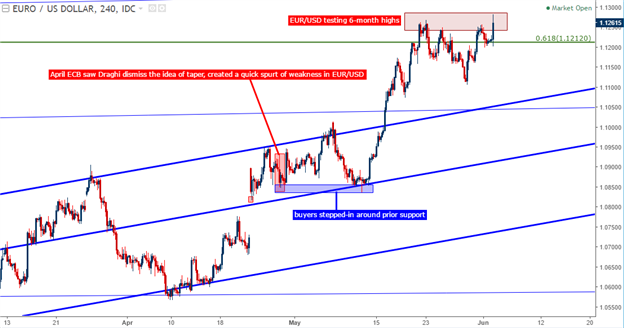