Traders are 5-1 long gold, check out the IG Client Sentiment page to see how this acts as a contrarian indicator.

At last, a one-way move in gold. Right before the break, we had been discussing the potential for a strong breakout, with the preferred direction down given the lack of support levels standing in the way. While gold is extended a bit in the short-term, there is still plenty of room to go lower before substantial support is met.

Looking lower, there is a minor form of support by way of a lower parallel extending from April, but not viewed as the type of support which could forge out a low. Instead, the trend-line from December 2015 and December low remain targeted. These are situated in the lower-1240s down to 1236.

From a tactical standpoint, risk of a bounce is rising, so fresh shorts run the risk of pain and don’t offer the best risk/reward profile at the moment. Awaiting a snapback and stalling momentum on a bounce looks like a prudent way to establish a position at this juncture. For existing shorts from good prices, the trend right now is your friend, but still manage with care – that is, tactics such as moving initial stops lower, trailing stops, etc. 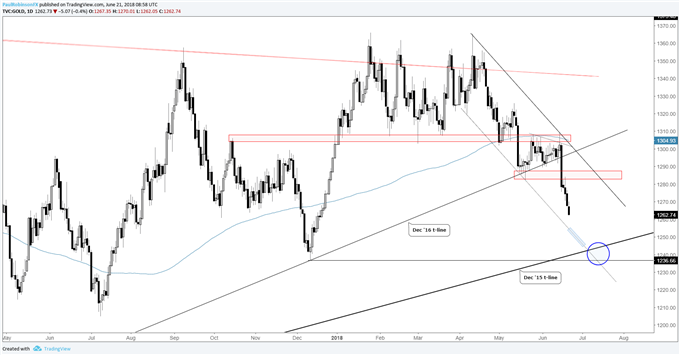 Silver at trend-line support, a break brings ’03 trend-line into play

Last week, we expressed our sentiment that it would be unsurprising to see silver fall apart from resistance as it did back in April. Indeed, silver fell apart on Friday. That’s been the life of a silver trader; chop, chop, make furious a move.

The downdraft has a trend-line from July in play (bottom of long-term wedge), which could give it some life or stall the downward move at the least. A break, though, would be considered important (wedge break) and have a 15-yr trend-line in focus along with the December low at 15.65.

Tactically, gold remains favored over silver at this time not only due to its technical posturing, but also given that its price action is far less erratic. 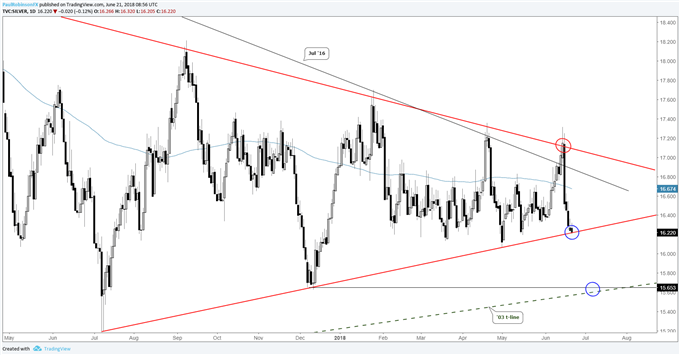