What is expected to drive Precious Metals into year-end? To find out, check out the DailyFX Q4 Forecast.

Silver has clearly been stronger than gold prices lately, as it has taken back a large chunk (mostly done yesterday) of the most recent slide starting back on 10/16, while gold struggles to trade to a one-week high. The bounce in silver is coming off a trend-line we discussed in Tuesday’s webinar. At the time it was a tentative trend-line as we hadn’t seen a large reaction off of it yet, but that we got yesterday, solidifying its influence.

However, this doesn’t mean silver is necessarily set to rally just because it bounced off support, it just means its stronger than its ‘big brother’, gold. Gold is floundering at trend-line resistance running down off the September high. Not far below lies a confluence of support we’ve been discussing in the vicinity of 1262/60; composed of a trend-line extending higher since December, October low, and the 200-day MA. Gold is getting boxed in between a pair of important lines, of which the US dollar may have a say in which side breaks… 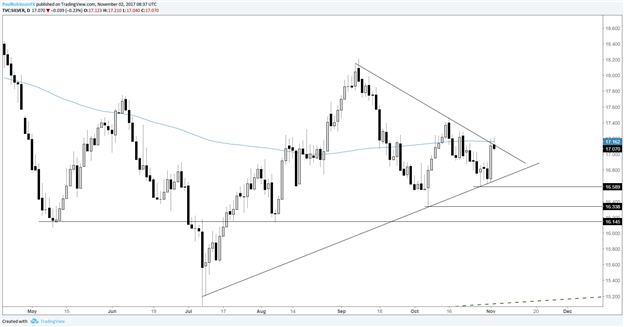 The long-term inverse relationship between precious metals and the US dollar is no secret, but from time-to-time it breaks down in the shorter-run they trade together. We’ve had this discussion before. With that said, the relationship has been pretty reliable the past few months even on the shorter time-frames, say the one-month. Between gold and the US Dollar Index (DXY) the one-month correlation is -82%, while the index versus silver is at -61%. Both statistically significant, especially gold vs. USD.

Just last week, the US Dollar Index (DXY) broke out of an inverse ‘head-and-shoulders’ pattern with the help of the euro taking a hit on the ECB meeting. This sets the dollar up for a rally, and potentially a strong one. This may or may not be a killer of precious metals. Recently, despite the strong relationship, they don’t want to drop as fast as the dollar wants to rally. (Which is the thing about correlation, it doesn’t measure magnitude.)

Check out these ideas for Building Confidence in Trading.

To conclude, the DXY is set to rally while gold and silver both have a ‘line-in-the-sand’ in terms of support. If those break then look for precious metals to take a hit. Looking at relative strength (not the indicator), preference is towards gold shorts at this time should it break the aforementioned confluence of support. But so goes gold, goes silver, and with that watch the trend-line off the July low as it could cause silver to play catch-up should things get ugly for the sector.