Can the US Dollar & Gold Price Advance Together? Sure They Can…

Last week, we noted that the US Dollar Index (DXY) looked likely to have put in a tradable low after the Tuesday ‘spike-and-reverse’ from a zone of major long-term support. By the end of last week this view was further underpinned by continued strength on the heels of the strongest weekly turnabout in the euro in several months (the euro constitutes ~57% of the DXY). The August monthly candlestick in DXY had ‘doji-like’ characteristics in that it closed near the open with a range to the top and bottom-side. This represents a power struggle between buyers and sellers, which when arriving at a major level hints at a developing reversal.

So, with the case for a USD bounce strengthening; where does this leave the outlook for precious metals? Let’s first take a look at the technical outlook for gold by itself and then visit the long-term relationship between the dollar and gold, and how that could play out over the shorter-term.

In recent weeks, gold has come a long way from a big-picture perspective. The weekly closing bar in early August was well above the widely-watched 2011 trend-line, giving indication that a long-term turnaround may pick up momentum. Last week’s price action furthered the bullish case with a breakout above the double-top formed from April to June; a hurdle which gold struggled with a couple of weeks ago. In total, the tech outlook for gold looks solid, paving the way towards possibly soon seeing the 2016 high at 1375 and higher.

Check out our new beginner’s guide – 'Building Confidence in Trading'.

With both the dollar and gold having bullish outlooks, something has to give, right? No, not necessarily. While it’s true the correlation between the metal and currency has been inverted over the long-run (i.e. – 5-yr correlation stands at -59%), the relationship does flip from time to time and the two will move in tandem. This year alone there have been three meaningful occasions when looking out over a few weeks (February, April-May, and June-July). Last week could have marked the beginning of a fourth occurrence (August-???). 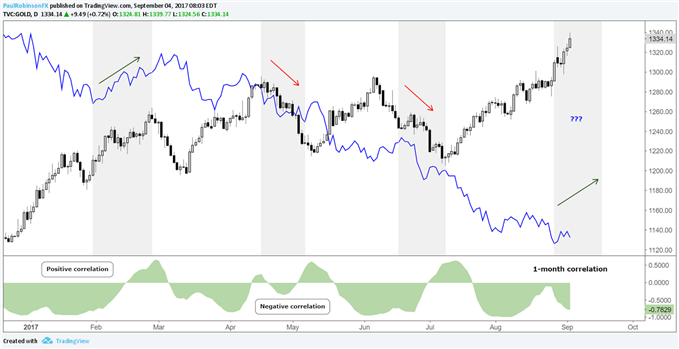 What does this all mean? Other than the obvious, both can rise (or fall) together; it means when viewing the two markets it’s prudent to not over analyze how they are trading relative to one another and to observe price action in each market on its own merit. Also, remember correlation doesn’t measure magnitude. So while two assets trade together one may do-so with significantly more momentum than the other (i.e. – gold rallies strongly while the dollar trades higher with weak momentum, or vice versa). Also, it’s a good idea to keep in mind how changing correlations can impact the overall risk-profile of your trading account.

Related Reading: Did the US Dollar Just Bottom? Bullish vs. EUR, GBP, JPY