Find out what’s driving Gold & Silver in our Q3 Forecast.

On fears flaring from North Korea firing a missile over Japan on Monday night, precious metals responded in safe haven fashion as ‘risk-off’ took hold. At least temporarily. We saw risk currencies such as JPY turn around, stocks rebound, and sellers dump precious metal contracts. USD found support at the bottom of a long-term support zone.

Silver was trading temporarily above the July 2016 trend-line, but failed to hold by the end of yesterday’s session. This paints a somewhat bearish picture looking out over the near-term. Even though gold is trading above the 2011 trend-line and double-tops from April/June (paving the way for higher prices), we can’t ignore the fact silver is facing sellers at a key line of resistance.

However, with that said, the channel off the July spike-low continues to keep the precious metal pointed higher. As long as the lower holds then so does a broader positive bias. A rejection of the July trend-line and subsequent break of the lower parallel will turn the bias bearish.

Keep an eye on the US dollar, as we noted earlier it did find good support yesterday and could be in the process of putting in a tradeable low. If this is the case, we may see the beforementioned bearish scenario unfold. Watch the similar channel in gold (and double-tops at 1296), as well; if it breaks its lower parallel/DT that likely means silver is on its way lower too.

Check out our new guide! – Building Confidence in Trading 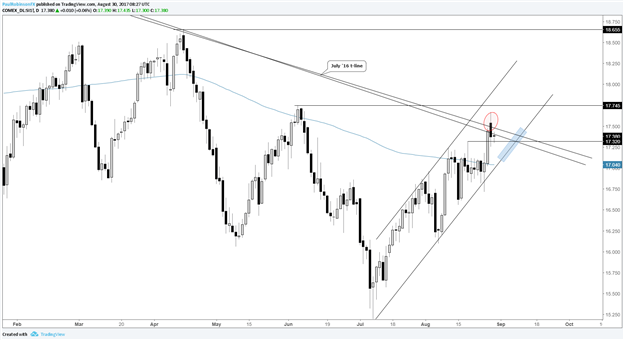 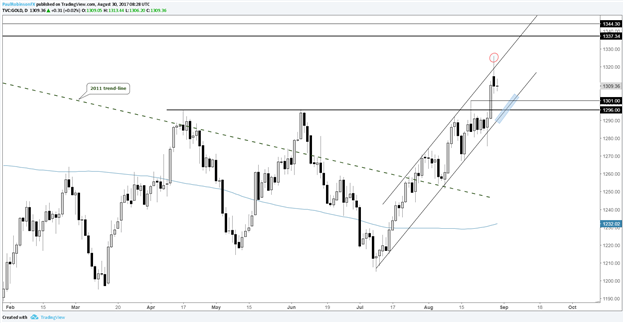 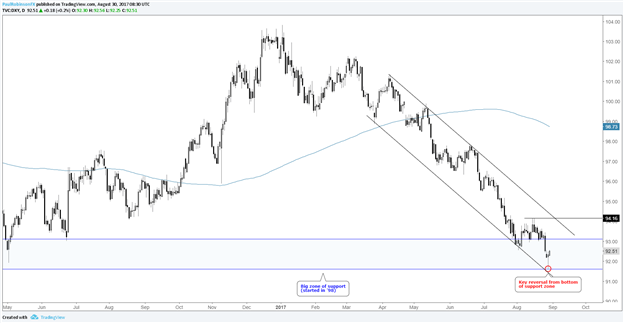