Did the US Dollar Just Bottom? Bullish Vs. EUR, GBP, JPY

Join Paul live for charts and trade set-ups each week, see the Webinar Calendar for details.

The US dollar put in a strong reversal yesterday against its major counterparts, and with the US Dollar Index (DXY) having turned sharply higher from near the very low-end of a long-term support zone (started in '98) it’s quite possible we just saw a tradable low carved out. It’s been a one-way road with market participants piling in short since the beginning of the year, but as noted in the euro weekly forecast, a counter-move could unfold swiftly. If the low from yesterday is taken out then a bullish view will be shelved, at least temporarily. 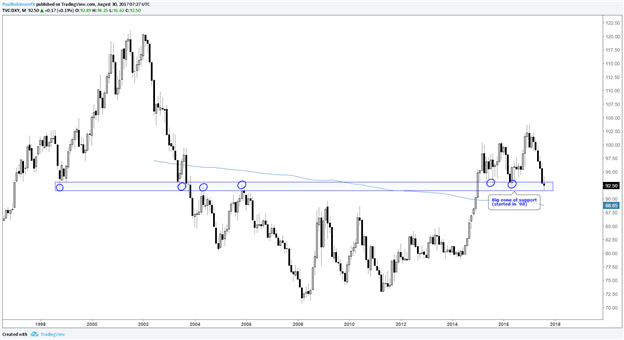 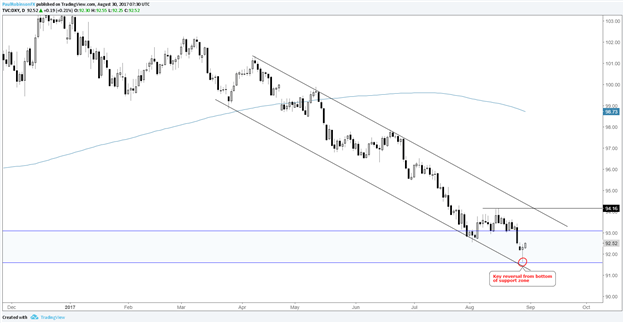 The euro makes up approximately 57% of the DXY index, and on that it will be the primary driver behind US dollar reversal. Yesterday, EURUSD rallied up just beyond the 2012 low before putting in a bearish key reversal bar (i.e. pin bar, shooting star…). Looking initially for a move to the April trend-line, but a deeper retracement is anticipated. 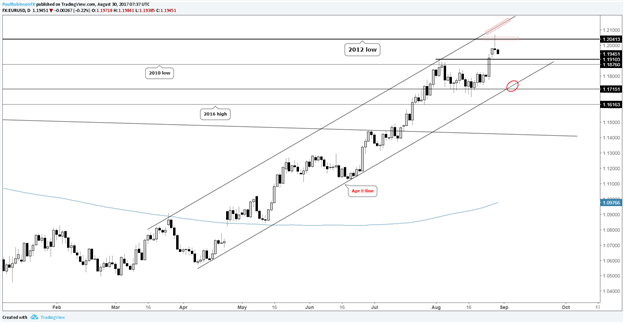 Check out longer-term market views and educational content on our Trading Guides page.

GBPUSD turned lower yesterday after testing the under-side of a broken trend-line dating back to March. First up in terms of support comes by way of the lower parallel dating back to April. The mid-12700s is also an important area to watch, but below there we could see a move develop towards a zone under 12600. 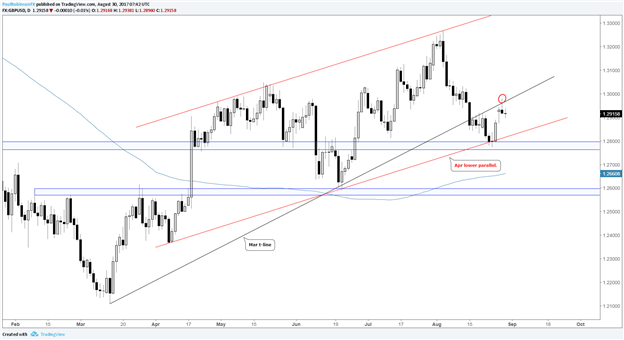 USDJPY took out recent lows and reversed yesterday from the April low. It was a sharp reversal with a turn in risk sentiment as U.S. stocks shook off the recent North Korean threat. Looking higher, the target initially arrives over 11200 where we have a cross-road created by the September and January trend-lines. The 200-day currently lies at around 11245. 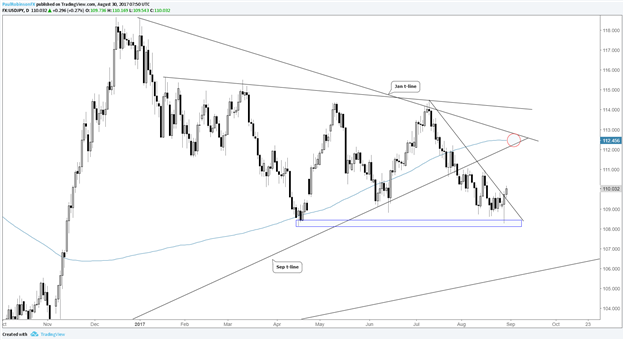 The general bias is for a higher dollar, so the approach here is to look for short EURUSD, GBPUSD, and long USDJPY set-ups fitting within the preferred trading time-frame, whether that be swing-trades for several days to several weeks or for maneuvers of shorter durations lasting only a few days at most.