How will the Fed impact Precious Metals in Q3? Find out here!

Last week, when we last discussed silver this is what we had to say, “Looking at silver price action the feeling on this end is that it’s still corrective in nature and that we have yet to see the worst levels before a meaningful low can form.” From mid-April until now there is no denying the bearish backdrop to precious metals even though as of late they have been underpinned by a weaker US dollar. But the dollar hasn’t helped at all more broadly speaking, as the correlation over the past three months between precious metals and the buck has been positive. It’ll turn negative again at some point, perhaps soon, but let’s keep it simple and look at silver in a bubble…

The advance off this month’s low has been somewhat strong so far, but stronger bounces before turned out to be exactly just that – bounces. We’ve been watching levels and then price action around those levels for cues as to when the current bounce could begin to unravel again. A swing-low carved out last month was viewed as one area of potential resistance, silver sits just above it now. It put in a ‘doji-ish’ looking day yesterday, but not the most convincing of reversal candles, so we’ll want to see if selling interest from here accelerates and provide a high conviction turn in momentum. (Btw, speaking of candlesticks, join us on Thursday at 9:30 GMT for a discussion on candlesticks.)

If momentum doesn’t turn lower from around current levels, we’ll then look to the trend-line off the April peak and/or a swing-high which developed in late-June. Silver doesn’t necessarily need to turn lower, though, from a level of resistance, but it is preferred. Really we just need to see momentum in the current bounce start moving in reverse, giving us a better shot at having found the peak of the move.

The target remains at the 2003 trend-line roughly around 14.85. It’s a very long-term line of support so it should really be drawn with a thick crayon. Upon arrival at the trend-line we’ll be watching for signs of a possible low to operate off of from the long-side. But before we get ahead of ourselves focus begins on finding a spot to short the current bounce.

Heads up: Tomorrow, the FOMC will release its decision on interest rates and monetary policy statement. Given the nearly zero expectation of a rate hike, attention will be on the latter for indications as to what the Fed may want to do at the September meeting. Join Chief Strategist John Kicklighter for live coverage of the announcement. 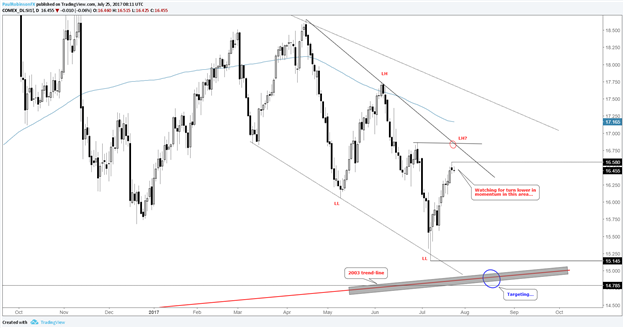