What fundamental factors will drive precious metals in Q3? See our Quarterly Forecast.

The other day when we were discussing silver price, we were looking at the long-term trend-line extending higher from 2003 as our big down-side objective before seeing a bounce (perhaps a major low) develop. Obviously with the trend-line 14-years old it’s a big line of support, but we’re not there yet – and with that said there is still room to go lower in the near-term. This opens up a path for further declines to take advantage of as a short-term trader.

The decline off the June swing-high has been fairly orderly (for silver), aside from the ‘flash crash’ seen last Thursday during the Asia session. But even the ‘flash crash’ once the Comex broke the prints down in the low-14s wasn’t all that disorderly. In fact, as we noted the other day the move after the U.S. jobs report was just as large (both equated to roughly 60 cents of carnage).

We’ve seen one bounce already in the near-term downtrend turn lower and the bounce over the past few days, while a bit more powerful than the first bounce, still smacks of corrective price action, not of a low. We’re coming up on the low from May as resistance in addition to the trend-line off the June 6 peak. Depending on the timing of arrival, assuming silver extends a bit higher, the two lines of resistance could be confluence and offer traders a low-risk spot to join in for another more push lower.

One more decline appears to be in store before the 2003 trend-line is thoroughly tested; at which time if price action plays out in proper fashion we’ll look to reverse our short bias towards a recovery bounce at the least, if not a sustainable low for some time to come. 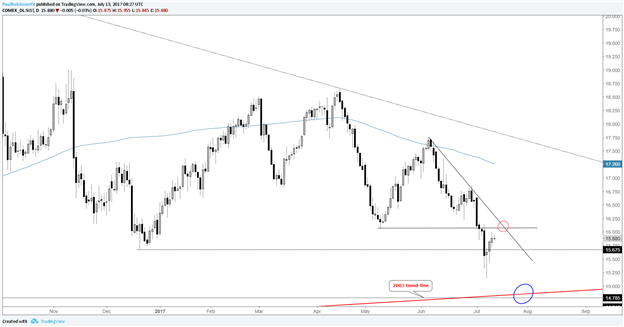