What are viewed as key drivers of gold and silver in Q3? See our Quarterly Forecast here.

On Thursday, we were discussing tactical entries for taking advantage of further weakness in silver prices, and then the ‘flash crash’ during the Asia session took place, taking away any new low-risk entries. While the plunge was sharp, trades which were executed all the way down in the low-14s were broken on the Comex (futures exchange where silver trades). A new low for Friday’s session was established at 15.54, which was still a big move coming from over 16, but not completely out of line with price swings seen before in this high-beta precious metal. The U.S. jobs report actually did comparable damage to what was experienced as a result of the ‘flash crash’. After removing the extreme prints from the night before, the ~60 cent move lower following NFPs was just as big.

The first objective we’ve been targeting is the December low, which was broken following the monthly jobs report. We’re now closing in on a very significant trend-line dating back just over 14 years. The 2003 trend-line runs under lows created in 2008 and 2015, extending higher to around 14.80. The thinking on this end is that we will see an initial test hold and the trend-line will provide a relief bounce at the least if not forge a big-picture low. In this scenario, how the bounce unfolds will be the key to determining whether a sustainable low has been forged or not.

It’s all about the weekly (or even monthly) closing bar, not daily. Given the long-term nature of the trend-line, the daily chart is too short of a time-frame to provide validation on either a hold or break of the important threshold. Silver could drop through the trend-line on an intra-week basis, but recover and close the week back above the trend-line and it will be considered a successful hold. (Not long ago we had the ‘daily versus weekly closing bar’ scenario play out in gold at the 2011 down-trend line.) There are levels of minor importance from early 2016 in near confluence with the trend-line in the 14.61/78 area. Should silver hold and turn higher the first point of near-term resistance will be the December low at 15.67. If the trend-line and horizontal support fail to provide support, whether it’s now or later, the 2015 low at 13.62 will become exposed. 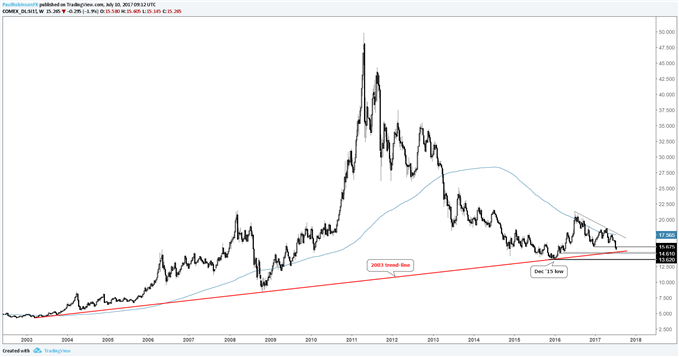