Silver Price Bouncing into Resistance, ’Time Correction’ May Be Under Way

Silver prices turned around on Friday with the help of US dollar weakness despite a better than expected NFPs figure (235k vs. 200k expected). The bounce is carrying over so far to start the week, but is already facing resistance in the low-17s, an area we had penciled in as possible support last week. It’s been an important area on several occasions going back as far as June, and while silver saw no response there last week, we will still look to it on this bounce as a potential spot for silver to turn back lower from. Both gold and silver have yet to reach meaningful support levels (1180 & 16.64, respectively), and on that it is anticipated we will see further weakness in precious metals.

The decline from near 18.50 to 16.85 took shape in straight-line fashion, so it’s safe to say silver became oversold. With price already testing resistance, we may not see an immediate turn back lower without a little digestion, or a ‘time correction’, to work off oversold conditions. A short period of failed attempts to push higher would strengthen the case for lower prices, and on a break of 16.85 expectation is we will see the next level of support at 16.64 met, or worse. Keep an eye on gold around 1217 as resistance, 1180 as support. 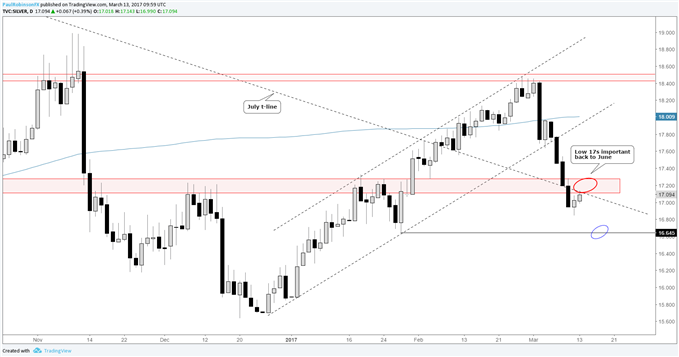 Heads up: FOMC rate decision on Wednesday. Market xpectations are 100% that we see a 25-bps increase, so barring an unexpected move of 50-bps or nothing at all, it's likely near-term market movements will be shaped by Fed language and clues as to the anticipated path for rates moving forward.