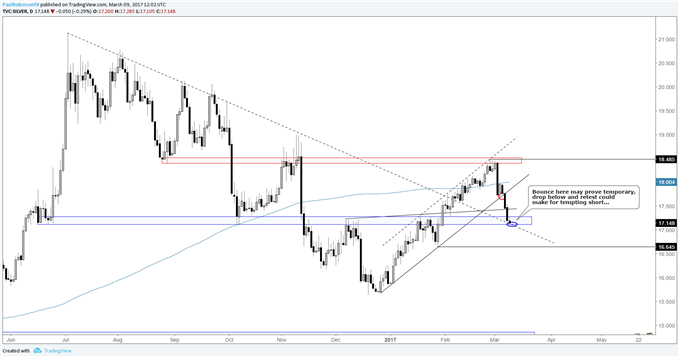 Since Tuesday, when we last took a look at silver, it has continued to drop below the December trend-line as anticipated, and was unresponsive to the first level of support around 17.40 (old neckline of inverse H&S pattern). Gold also failed to hold its first level of support around the 1217 mark. The decline in precious metals has been fierce, but further losses ahead look likely given the velocity at which they have declined so far, and due to gold not having another real support level readily available until 1180.

Silver is currently sitting on an area of support above the 17 mark. It has confluence here of both horizontal support extending back to June and a back-side test of the July trend-line. Barring a sharp counter-move, this may only prove to be a minor stopping point. However, selling into the current decline, especially with support at hand, doesn’t hold good risk reward at this time. Either a weak bounce to alleviate short-term oversold conditions, or a drop below noted support around 17 and retest of that area on a bounce (old support = new resistance) will be viewed as an opportunity to potentially cash in on further weakness. The latter scenario is preferred. The next level of support below 17 comes in at 16.64.

Coming up here in just a bit we have the ECB rate decision/press conference, which could spark volatility across the risk spectrum. Tomorrow, we have the monthly U.S. jobs report (NFPs); barring a major deviation to the downside from the expected 200k new jobs added during February, there may not be much volatility as probability (per Fed Fund futures) for a rate hike at the March FOMC meeting is nearly 100%. (See the economic calendar for details.) As per usual, though, be prepared for the unexpected and manage risk accordingly.