What is there to update regarding silver prices? Not a lot by just looking at the net change over the past couple of weeks, but a couple of noteworthy developments are taking shape. For starters, the dollar continues to rally while precious metals are holding their own. It could be a short-term aberration or a sign of relative strength on the part of metals. Correlation, or in this case negative correlation, oscillates, and while it measures the relationship between two data sets, correlation doesn’t take into account the magnitude of price swings between the two data sets (markets). The negative correlation is still there, it's just not as apparent as before. The 21-day correlation between the dollar and silver is at a strongly negative 84%.

The growing ‘strength’ in precious metals versus the dollar could morph into a rally should we see the dollar decline materially, or further dollar strength could undermine silver again and send it lower. Or, perhaps something altogether different. Where does this leave us with this ‘correlation thing’? Glad you asked. We previously anticipated that the more the dollar rallies, the more it would push silver lower, but, as we are seeing this has not been the case. This is why I like to look at correlations from a little distance, because getting overly caught up in them can lead to more confusion than there needs to be.

Let’s look at price action with correlation off in the corner: Silver has gone nowhere for two weeks after the sharp drop. From our perspective, this equates to bearish at this time as buyers fail to reverse the strong move lower. Dead cat bounce. It is also moving sideways below some pretty important resistance (lower parallel; horizontal level back to ’15; broken Jan trend-line), but above minor support. Major resistance trumps minor support.

A break in either direction could take shape and that ‘correlation thing’ could once again become clear. It might not. But in any event, we will go with the break of a fully formed triangle and see where it takes us. A break higher will require silver to plow through tough resistance, getting above 18 will be key for it to grow legs. A break lower will be along the path of least resistance and would likely allow silver to take out the 17.11 level. A close below 17.11 would open a path towards 16 as there lies nothing visible to the left once that minor support level is undercut. 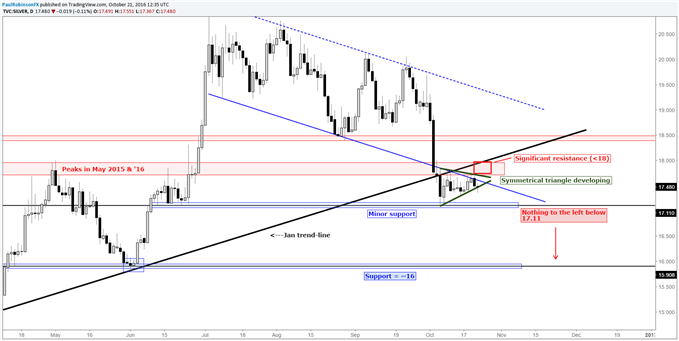 Find out where our team of analyst think various asset classes are headed for the remainder of Q4.