The last technical article painted a picture that the chart for Crude Oil appeared to favor the Patient Bulls. This view was taken from the background and larger momentum view as showed with price in relation to the Daily Ichimoku Cloud and Andrew’s Pitchfork drawn on the chart. Add to price sitting in a Bullish or upward bias with these two advanced indicators; the price has been triangulating since the beginning of the year.

Price consolidations that are visualized as a sideways move are very boring to watch, but their bias is rather clear. Consolidation tends to favor continuation of the prior trend. Since Mid-August, the price of Crude Oil has march confidently higher alongside many other commodities and commodity currencies. While Crude Oil has lagged many of its commodity brethren, there does appear to be a unified march higher in the commodity field that could continue if the anticipation of inflation persists.

On the fundamental front, we got word that OPEC is looking to step up its compliance with the late-November supply cut accord. Recent numbers we’ve seen were regarding compliance to the agreed-upon cuts were as high as 92%, but recent comments from OPEC were revealed to seek 100% compliance, which would further drop the international supply of Oil, which could continue to favor further upside.

Upon this comment from OPEC seeking higher compliance, we got a few institutions raising their Crude Oil Forecasts with Citi raising their forecast by $55/barrel. The combination of events seems to shift the focus back higher to new resistance near $55.25/bbl followed by $57.50/bbl.

Looking at the chart, we continue to see a new and higher floor in Oil at $50 per barrel, as we could be moving toward a possible supply deficit, which Goldman Sachs has predicted despite rising U.S Crude stockpiles.

The higher price floor has encouraged the view that we see an Elliott-Wave pattern known as a triangle, which is a mid-trend correction pattern. Naturally, this would mean that the price is taking a break from its prior advance higher in a bull market (lower in a bear market) before advancing again. Therefore, we continue to be on the look for validating signs that price is again marching higher.

Tuesday’s breakout on news of seeking increased OPEC Compliance, which OPEC Secretary-General Mohammad Barkindo recently said current compliance has been, “very encouraging,” alongside institutions pushing forecasts with the chart structure remaining bullish will keep our focus higher unless we see a close below the February low of $51.25/bbl. 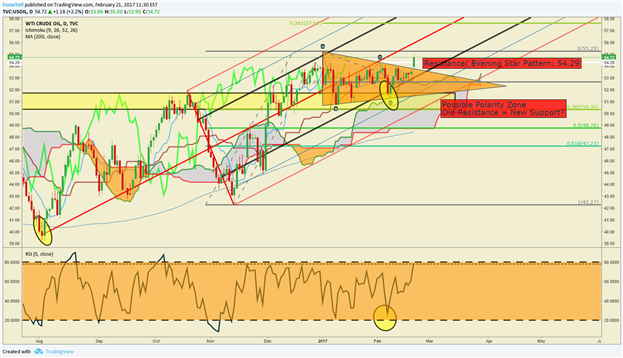