USD/JPY Technical Analysis: Is This The Pre-Helicopter Money Run Up?

The price of USD/JPY is running higher as the opening range for October is getting set. Friday will bring Non-Farm Payroll in the United States for September, and Fed Speakers continue to introduce two-way risk regarding the path of interest rates in the US.

Over the last two-weeks since the Bank of Japan introduced “Yield-Curve Control” in exchange for targeting the monetary base (introducing more stimulus), we are seeing a subtle shift in attitude toward the implications of shifting policy strategy thanks to the mind and words of our James Stanley.

In short, Helicopter Money has been discussed as a possible new frontier of monetary easing to go from recession recovery (QE’s focus) to fostering growth. However, helicopter money may be coming in the form of “Yield Curve Control,” by encouraging private money to buy bonds to support a fiscal action like infrastructure. The price of bonds can be guaranteed by the BoJ with the new policy, and this could help support what the Abe government is looking to achieve with their government.

While aggressive JPY weakness will not happen right away, even though a new trend could be setting itself up, we could see the path being set for the next great wave of JPY selling. We’ve long noted that JPY strength from June 2015 to present is due in large part to the repatriation of JPY from Japanese institutions. However, a fixed zero-yielding JGB could spark the next great carry trade from Japan as institutional investors go once again on the great hunt for yield in spite of the zero-yielding domestic bond market. 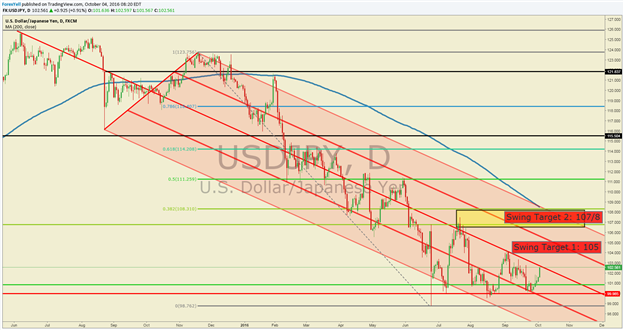 Looking above, you can see what appears to be a very clear downtrend as highlighted by Andrew’s Pitchfork (Red). The long-term trend shows the path of least resistance, but it is worth being watchful for signs of a trend change.

On the pitchfork above, you can see that there are three key levels of resistance on USD/JPY. The median line itself, which has a leading slope in the direction of the trend is 102.71. The middle line between the upper parallel and the median line sits at 105, and the upper parallel line comes at a strong confluence of technical resistance. The upper median line lands in-between 107/108.5 and aligns with the 200-DMA and the 38.2% retracement of the November-July price range.

In previous market notes, we’ve discussed how Ichimoku Cloud would be one of the first long-term indicators to register a Bullish signal on a break and close above 103.20 on the daily chart.

Another thing to note is the opening range of October that was briefly mentioned at that the beginning. Opening Range reversals are commonplace and should be indicative of trend continuation. In the case of October, we’d have an opening range reversal if the price of USD/JPY broke below 101.17 (Monday’s low) in the second week of October and continued lower. However, a continuation of the resistance levels mentioned above breaking and we could see traders start to push the market higher in fear of missing out on the next USD/JPY long trade.