While some have felt the US Dollar was oversold, and the JPY overbought, few traders likely expected that USD/JPY would be higher by ~250 pips on the session to close the week. Many know that on January 29, the Bank of Japan announced negative interest rates on excess reserves. However, overnight, we found out that the BoJ is considering offering banks loans with a negative rate, which is something similarly offered by the ECB to banks via the Targeted Longer-Term Refinancing Operation or TLTRO-II.

So far, we’ve broken above key zones of resistance starts that was at last week’s high, 109.73, up to the March 17 low, 110.65. This strong break above could bring about a slingshot move higher to prior resistance around 114/15. Naturally, the environment in April is fundamentally different from other times of stimulus as SPX500 is within 3% of an all-time high and the US Dollar appears to be in a bonafide downtrend. Therefore, the weak US Dollar may hinder, yet likely won’t stop the weak JPY at the same time that stocks in the US will likely fail to see as much of a benefit from risk-seeking behavior. On the other hand, the Japanese Nikkei could recover a lot of ground, and is, in fact, looking to recover the high that was set during the January 29 negative interest rate announcement.

Looking forward, USD/JPY has three key levels of resistance that are in my sights, and I’d advise you keep an eye on them as well. If we fail to break above the resistance levels from here, it could indicate that USD/JPY had a sugar high reaction, just like it did on January 29 (labeled ‘2’ on the chart above/ below), and we could soon test and break the recent low around 107.90.

The first resistance level is close and may seem insignificant, but it is the 112 level which was an impulsive decline extreme on the way down. I wouldn’t expect this level to give USD/JPY bulls too much trouble, but please note, if this level holds, this move is likely almost done. Beyond this level, the 38.2% Fibonacci Retracement Resistance level aligns perfectly with the prior corrective top and channel resistance (labeled ‘4’ on the chart above/below). I would expect hesitation here, and a break through these levels may well indicate we’re well on our way to test the next key level of chart resistance.

The Larger Trend Causes Doubt To Creep In

As you can see on the chart above, the larger channels have a negative slope indicating a longer-term downtrend. Of course, the ever-longer term trend is up from 2011, but that’s part of an ever larger downtrend from the 1980s.

That being said, I caution traders about thinking we’re right back in the days of 2011-2015 where USD/JPY was either sideways or pushing impulsively higher. Rather, it appears that US Dollar strength has become a focus of central bankers, and they’ll work to keep it that way by note specifically targeting a weaker domestic currency to, in turn, prop up the US Dollar. Since late January/ early February, the JPY has been surprisingly strong at a time the US Dollar has become excessively weak. If the former part of the relationship will trade, short JPY could work out against the US Dollar, buy may work out better against other better-performing currencies like Commodity FX. 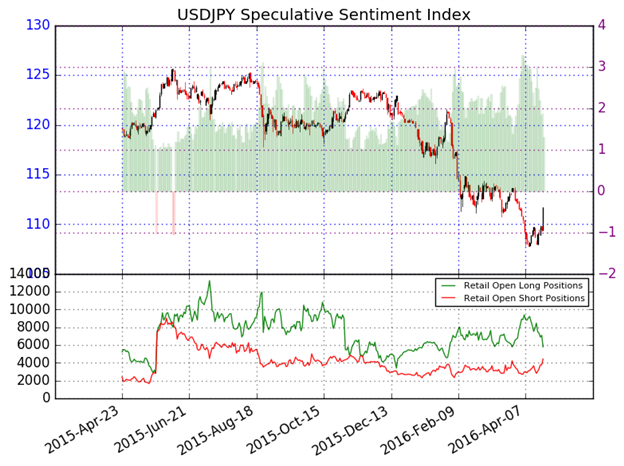 This sentiment move is a dramatic shift, and should be watching for an indication of a larger shift higher in USD/JPY. The trading crowd has grown less net-long from yesterday and last week. However, because short positions are building up, we could be seeing signs of a sentiment and a signal flip developing.